Today, I get to interview the interviewer, my blog partner, pub sister, and reaper-loving friend, Dorothy Dreyer! But before we dig in, lets have a look at her newest (and quite fabulous) novel, My Tethered Soul. It's not-so-coincidentally out NOW! Also, don't forget to enter the giveaway at the end of this post. 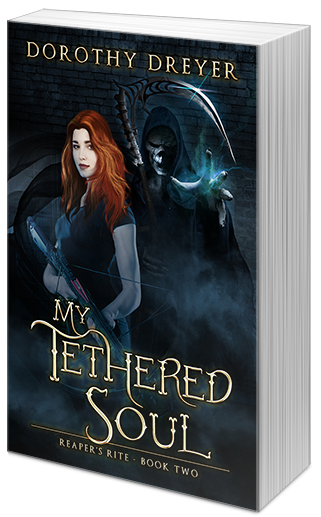 It’s been months since Zadie faced her sister’s Reaper, months during which she’s been under her mentor’s magical protection. But now that she’s turning seventeen, that protection is about to run out.

When dark forces lure Zadie to wander at night, she’s manipulated into committing unspeakable acts. With her friends and family at risk, Zadie must try to use her powers to break free from the Reaper’s grasp, or surrender to the Reaper’s Rite, which can only lead to death.


Howdy, Dorothy! I am so stoked to be interviewing you today! How does it feel to be the interviewee for once?

Pretty cool! Let me just get cozy in this interviewee chair. Could you get me a cup of coffee? Got any snacks?

I always have coffee and snacks! Tell us about My Tethered Soul.

This is the sequel to My Sister’s Reaper. The main character, Zadie, faced her sister’s Reaper in the last book. Months have now passed, and she’s turning seventeen. This is a major point in life for people like Zadie—she’s a Vila, or half-faery half-witch. And Vila are susceptible to the Reaper’s grasp once they turn seventeen. My Tethered Soul follows Zadie through this tumultuous point in her life.

My Tethered Soul is the second book in the Reaper’s Rite series. What unique challenges did you face writing the sequel? Was it easier or harder for you?

The easy part was already knowing my characters. I found ease in writing them because I had already spent so much time with them. The challenges was keeping the story authentic while upping the creep factor and making sure character arcs moved forward.

I think you did a great job with that! Your main character, Zadie, is a normal teenage girl with a rather abnormal ability and some downright scary things to face. Other than the paranormal part, how do you identify with Zadie? Is there a bit of teenage Dorothy inside of her?

Yes, I think Zadie is a little unsure of herself despite knowing she has something great inside of her. That’s teenage me in a nutshell. She also feels very responsible for the people around her, and I think she gets that from me.

Who would you say your biggest influences have been?

Maggie Stiefvater, for sure. I feel so comfortable reading her books, yet thrilled at the same time. And that showed me to be myself in my writing while at the same time being entertaining. I’m also very influenced with the pacing and page-flippability of Veronica Roth’s books. But if you want to go way back, Michael Crichton’s books showed me how important it is to write an easy-to-read book.

Well, I do tend to sing. Just not as much as I used to. I also wrote and directed two “movies” starring my kids as action heroes when they were younger. One of them was a musical. They’re just home DVDs, but they were fun!

I'm also a singer! We'll have to get together for a bit of karaoke the next time you're in my part of the world. So ... plotter, or pantser?

Hard copies for the beach or in bed, ebooks for the train or when I have to pack light on a vacation.

Gah! I should have had that as an option! I'm with you. Dark chocolate, all the way!
Is there anyone you would like to thank for supporting you in you journey?

So many people, including Georgia McBride and Jennifer Million. I’d like to thank you, as well, Elizabeth, for your countless hours of critiquing my work. Also my friends and family who have been so supportive. And my readers, whom I hope continue to come back for more!

Aww! It's my pleasure! Thanks for letting me read it!

For anyone who hasn't read the first book in the Reaper's Rite Series, My Sister's Reaper, you should. Check it out at the links below! 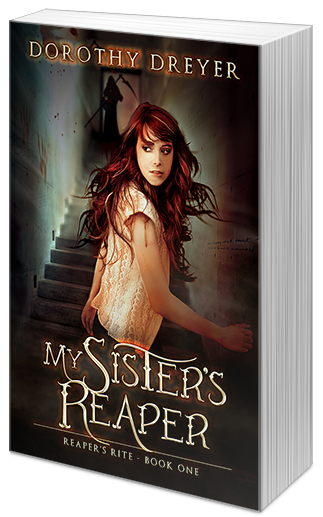 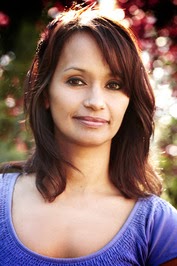 Dorothy Dreyer has always believed in magic. She loves reading, writing, movies, and spending time with her family and friends. Half-American and half-Filipino, Dorothy lives in Germany with her husband and two children.

Yay, thanks for the interview!

Wahoo! Here's where I admit I'm lame and don't want to read the series until it's complete...because I'm afraid I'll totally get sucked in and end up angry that I have to wait for the next installation, but I'm looking forward to reading it all. =)