Having just finished Darkness Reigns, I feel... well, a lot like Reed, the nearly 18, and yet just over, main character who after an adventure needs to settle in with a bit of blood, and then fall into a death sleep. It was nothing if not an adventure.Of course, I'd rather go for a bit of chocolate than blood. Call me old fashioned, but that's how I roll. 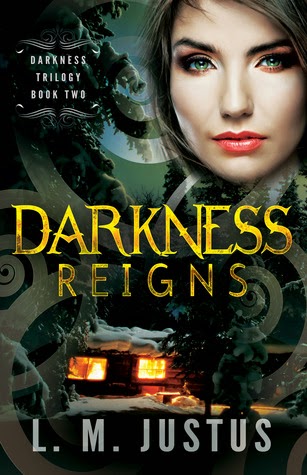 Darkness reigns picks up a beat after the close of Welcome to the Darkness, and will leave you wide eyed from the get go. Seriously, New York is ravaged by vampires, Reed and his companions are holed up in a building and in desperate need of an exit strategy, and he starts eyeing the humans, and all I could think was, oh boy, this went post-apocalyptic pretty quickly, but the interesting thing really is- minor spoiler alert- L.M. Justus doesn't just sell out her story and stay there. No, the escape from New York and the hybrid zombie apocalypse? That's just the beginning of a tale that continues to be the road trip deeper into Darkness. It was nice to see some interesting character growth throughout Darkness Reigns, though at moments, growth has a one step forward, two steps back relationship. For instance, as Trudy learns to trust her companions and bond with them, she loses something of her badassery and becomes less independent and over emotional. Of course, her character really needed to trust somebody.
Throughout Darkness Reigns, the reader is treated to an interesting and diverse parade of characters, and gets to watch as Reed begins to grow into his vampire skin as much as it is still growing into him. Sarah and Sophie's relationship changes, but it's mostly about overcoming the challenges of dealing with a world that is both more dangerous and more complex than the one Reed grew up prepared to handle. The name of the game is ultimately stay alive- well, unless you're undead, then it's stay un-alive, but you get the picture.

The politics and action reminded me of what the Anita Blake series would have been, if it had been written younger. If you love vampires for the twilighty romancy slow pace, this isn't your series. If you like them for their fierce fighting and penchant for madness, and love a good adventure, this will be right up your alley.

After their failed attempt to stop the spread of a virus that turns people into zombie-like, human-vampire hybrids, Reed Hennessy and his ragtag crew are scrambling to stay alive. To make matters worse, the human authorities are close to proving the existence of vampires and blaming them for the disaster in New York.

Their storm of trouble is already spinning out of control when an old enemy reappears to issue a challenge–an ultimatum that will mean certain death for at least one member of Reed’s group. With their mountain of problems growing exponentially and a host of enemies closing in, they flee for their lives, desperate for a miracle. Will they survive and avoid the world’s scrutiny, or will darkness prevail?

Welcome to the Darkness- Synopsis:

A typical teenager, seventeen-year-old Reed Hennessy doesn’t realize how lucky he is to lead a normal life until he loses everything, including his humanity. The attacker who slaughters his family and destroys their home turns out to be a vampire, a creature Reed had considered a myth.
Now a vampire himself, but with the unique ability to walk in sunlight, Reed struggles in the dark underworld he didn’t even know existed. His only two allies in his fight to stay alive are his reluctant mentor, Nathaniel, a vampire with over two hundred years’ worth of emotional baggage, and Sarah, a rookie cop with a secret ability of her own.
Together, Reed and his companions face a harrowing, cross-country journey before stumbling into a plot which could mean the end of everything for humans and vampires alike. 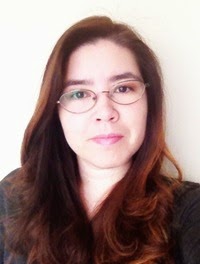 Lisa Justus’ path to becoming an author took a circuitous route through the University of Waterloo where she earned a Bachelor of Mathematics, followed by jobs in quality assurance and technical writing at a high-tech company. With a keen interest in creative fiction, she wrote her first fantasy novel as part of NaNoWriMo as well as an early chapter book for her kids when they were younger. Welcome to the Darkness and Darkness Reigns are the first two books of the Darkness Trilogy, a YA paranormal fantasy.

These days Lisa is busy writing her next novel, reading, finishing her basement, doing volunteer work, and trying to stay in shape by running somewhat regularly. She, her husband, and their three children live in Ottawa, Ontario

Posted by Slee at 8:00 am
Email ThisBlogThis!Share to TwitterShare to FacebookShare to Pinterest
Labels: book reviews, giveaway, L.M. Justus

Thank you for the great review! I think "badassery" is my new favorite word, ha ha. ;)

I really think I'd love this series! For one, I love books set in NYC for some reason. And then vampires and zombies? And it just sounds action packed and awesome!! Great review, Sandra!

Great review. Thanks for posting, Sandra!