Today we are happy to welcome Kit Forbes to the blog for an interview! Ms. Forbes is the author of the newly released YA time-travel mystery SHADOWS FALL AWAY. And, let me tell you, this book sounds freaking awesome! 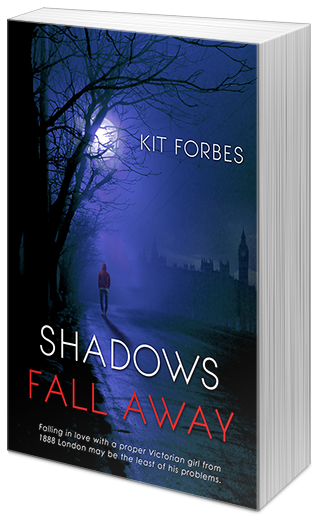 Mark Stewart is one incident away from becoming a juvenile delinquent, and his parents have had
enough. They ship Mark off to London England to stay with his eccentric aunt Agatha who is obsessed with all things Jack the Ripper. After a strange twist of luck, Mark is struck by lightning, and he wakes to find himself in 1888 Victorian London.

His interest in a string of murders Scotland Yard has yet to solve make him a likely suspect. After all, why would a young boy like Mark know so much about the murders? Could he be the ripper they’ve been searching for? Convinced the only way to get back home is to solve the murders, Mark dives headfirst into uncovering the truth.

Mark’s only distraction comes in the form of the beautiful Genie Trembly, a girl who is totally out of his league and who may have already caught the attention of the infamous ripper. To save her, he’ll endanger both their lives, and risk being trapped in the past forever.

Hi, Kit! Welcome to We Do Write. Tell us a bit about yourself.

I’m a mom of two grown daughters and a mini herd of feline furbabies. I work behind the scenes for a major retailer and have been a lifelong lover of romantic stories, history and all things paranormal.

Tell our readers a bit about SHADOWS FALL AWAY, which sounds amazing, by the way.

Seventeen-year-old year old Mark Stewart thinks a jail sentence would have been preferable to being placed on probation for his latest misdemeanor and having to spend the summer in the custody of his great aunt Agatha. Especially since Agatha's idea of fun is visiting an endless string of retired history professors and attending a "Ripperologist" convention in London.

When a lightning strike sends him back to 1888, (on the cusp of Jack the Ripper's infamous crime spree), Mark's only thought is to solve the case before it's too late. How hard can it be? After all, he knows when the murders will occur, his mother is the author of Victorian mysteries, and his father a detective. Besides, if he unmasks Ripper, there would be no conference and he would never have gotten stuck in that stupid thunderstorm.

Reality tends to be a bit more complicated than theory when Mark finds himself a potential suspect and realizes that his one friend in the 19th century—Eugenia Trambley, a girl his own age—may be closer to the Ripper than she knows.

Wow! That sounds so cool! How did the idea of the story come to you?

This story was a long time in the making. I was always fascinated with Victorian London and the mystery of who was Jack the Ripper. I originally thought of this as an adult romantic suspense that stalled about a quarter of the way through when a bit too much input from a former online friend derailed me. Then life got in the way and I stopped writing for a long time.

I’d always liked the idea of a modern day person hunting Jack with the knowledge and theories of the present. The idea kept nagging at me from the far reaches of my mind and once I started wondering “What if Mark wasn’t a detective himself but the son of one?” it finally came together and I went back to the beginning and began rewriting.

Mostly a pantser with a vague plot in my head. The best part of being a reader is dying to know “what happens next” and as weird as it is, that’s how I approach the writing.

When the characters don’t give me a big enough clue as to “what happens next” and I have to do all the work. LOL

Coffee and my headphones. Sometimes to listen to music and sometimes to block out whatever’s happening elsewhere in the room.

Nothing right now. I’ve been hunting the library but nothing has really caught my attention enough to take it home.

The power to decide on a specific power instead of having my brain filled with endless possibilities?

That’s a tough one. There have been a lot over the years. This week it might have to be tomb effigies.

At work wishing it was time to leave so I could finish the awesome scene that came to me in the morning about  five minutes before I had to catch the bus.

Georgia McBride and Month9Books for taking a chance on Shadows Fall Away and my fabulous crit partners from Young Adult Fiction Fanatics. And of course the bloggers and readers who put SFA on their “To read” lists. Thanks a bunch. I hope you like Mark and Genie as much as I do.

Kit Forbes has been a lover of books, history, and all things paranormal for as long as she can remember. She lives in Western Pennsylvania with her youngest daughter and an assortment of cats who give new meaning to the world bizarre.

Posted by Elizabeth Holloway at 10:34 am
Email ThisBlogThis!Share to TwitterShare to FacebookShare to Pinterest
Labels: giveaway, Kit Forbes, Month9Books, rafflecopter, Shadows Fall Away, YA Mystery, YA thriller, YA Time-Travel