Hello, everyone. I'm very pleased with the progress of the blog. We've gained a few more followers, and that makes me happy.

Here's another thing that makes me happy. Today we're chatting with another awesome aspiring writer. Let's get to know her. 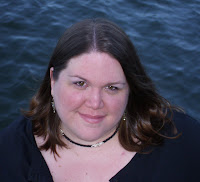 Welcome, Vaughn. Tell us a little about yourself.

I'm Vaughn McKenna, 29, living in Denver, CO. I work in the Loan Department of a bank. I’m single with no kids, but have two cats. I’m currently in school working to get my Bachelor’s Degree in Creative Writing.

A perfect degree to get for a writer! Speaking of which, tell us what you're working on.

I’m writing an urban fantasy series called Thirteen Kingdoms. The title of the first book in the series is “Moonlight in Purgatory.”

Love the title. It already creates images and tone. Here’s the part where you pitch it. What’s your story about?

“Moonlight in Purgatory” is a dark, dramatic and humor-tinged urban fantasy novel that follows the journey of a 21st century woman, Helen Troy (known as Hel). Hel is an unsuspecting mortal who is bitten by the faerie Tiberius and becomes a Blessed Mortal- - a human able to see the immortal beings who inhabit the Earth. One of the immortals is a man she knows and has lusted for in the past, the sensually appealing cupid, Gabriel Blackthorne. Hel is placed under Gabriel's protection after her transformation, but he is unable to save her from an attack by his own brother, the werewolf, Matt. She is nearly killed in the attack and finds upon awakening that greater powers have intervened, transforming her from a lonely, somewhat reclusive human to a feisty, sharp-tongued, shape-shifting griffin. She later learns that her transformation was thanks to the machinations of the hypnotically handsome vampire, Christopher, with the help of Loki, one of the Original Thirteen Immortals.

Whoa! So this story has faeries and werewolves and griffins and vampires—that's quite a combination. I'm intrigued. How did the idea of the story come to you?

I had created the character Hel about a year before I started writing Moonlight in Purgatory. One day, I just started writing an urban fantasy about a girl who was bitten by a faerie and could then see the new immortal world around her. I decided to insert Hel into the story, and voila! Nine months later, a novel about Helen “Hel” Troy.

Nine months, just like a pregnancy! So you could say this book is your baby. So now that your "baby" is complete, what steps have you taken with it so far?

I pitched “Moonlight in Purgatory” to a small publisher at MilehiCon in a scheduled pitching session. He told me if I sent it to him, he would send it on to his urban fantasy editor, which I did recently, and now I’m waiting to hear back.

That's fantastic. Do you have a critique group or beta readers, or do you self-edit?

I am part of a writers group. I also have a very good friend who does the editing after I have gone through the critiques I received from the writers group to make sure the content, continuity, grammar, and punctuation are correct.

Sounds perfect. What’s the hardest part of writing for you?

All of it! There are times when naming a character will keep me from writing for a week, or like right now I have this very intense scene I’m writing in the second book of this series, and I’m having a hard time with it because I’m not sure how to end the battle. It can’t be a fight to the death…yet. I know most of the story, but I don’t use an outline because I don’t find them very helpful, so there are things I’m not entirely sure about in terms of how they’re going to work out. They usually do, but it’s hard to see it and feel good about writing it until it’s done. But I love writing, and can’t imagine not doing it…so here I am.

Have someone, anyone, look at your work other than yourself. You can’t see everything, and sometimes you forget that your readers can’t read your mind and won’t always know what you’re saying. A fresh pair of eyes is definitely key. Also, don’t ever stop writing. I think it’s important to keep writing, to keep venturing forward in your craft.

All very sound advice. Tell us about your other projects.

I’m working on the second book in the Thirteen Kingdoms series, “House of Eros.” I have another novel, inches away from a final draft, called “Kallisto’s Hold.” And a young adult book called “The Lost” is half written. I know how it’s going to end, and I continue to work on it intermittently.

I have many inspirations. There are so many good writers out there that have moved me and made me work harder to be a better writer: Aaron Sorkin, Joss Whedon, Bryan Fuller, Patricia Briggs, M. Night Shyamalan, Kim Harrison, Stephen King, James Cameron, Eric Kripke, Orson Scott Card, Mercedes Lackey, John Hughes, and I could go on and on. Also, Erin Brockovich was a huge inspiration to me for so many reasons. She fought a system that was clearly broken and she persevered. Her unwillingness to give up is something I aspire to in my life as a whole.

Here’s the part where you thank the people who are supporting you. Who would you like to give a shout out to?

Vaughn, thank you so much for chatting with us today. I'm looking forward to the day I see your books in print. Good luck!
Posted by Dorothy Dreyer at 8:57 am
Email ThisBlogThis!Share to TwitterShare to FacebookShare to Pinterest
Labels: House of Eros, Kallisto's Hold, MilehiCon, Moonlight in Purgatory, The Lost, Thirteen Kingdoms, urban fantasy, Vaughn McKenna, YA

I love the concept of this book! Original and vibrant!

Interesting interview as usual Dorothy...despite your recent bout of illness...great job! The WIP mentioned sounds very heavy on the fantasy elements but also as if it's gained a life of it's own for this aspiring author....a much needed trait along the road to publication. Best of luck!

Great information here. Thank you for sharing. If you are ever in a need of denver
denver Services we are Aurora Locksmith Services. You can find us at auroralocksmithco.com.com or call us at: (720) 220-4851.


What a great article. Thanks for sharing. We are always looking to innovate and carry the industry forward by sharing great practices. What are your thoughts on digital advertising in regards to SEO, Graphic Design and Content? We have seen it all over the map from 500 word pieces to 2,500 word pieces. Not to mention the new hipster designs and parallax themes. What are your thoughts? Come check us out some time. Would love to hear what you think about our blog articles too.centermassmedia.com