I usually include a question in my interviews where I ask authors what superpower they would like to have. The most popular answer so far has been the ability to fly. Apropos, I have an interview today with a writer who can actually do that! With the help of a plane, that is. And in the practice of writing what you know, Nathan Carriker has written a novel about aviation. Let's chat with him and learn more. 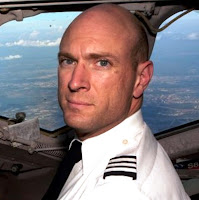 Hi, Nate! Welcome. Tell us a little about yourself?

When I was pitching agents, I’d tell them, “I’m a pilot. You could say I eat, drink, sleep, dream, and breathe Aviation, but that doesn’t quite cover it. If they could gather enough of it up in one place I’d actually jump into and roll around in the pile." I’ve been this way as long as I can remember, and it's the main reason I wrote A Silver Ring.

Tell us about A SILVER RING. What’s it about?

For their own in-house advertising, a friend at the Experimental Aviation Association slapped on a fantastic, simple subtitle that perfectly describes it: an aviation love story. I’m an absolute drooling fool for a good double entendre like that. Is it an aviation story about love, or a story about a love for aviation? Well, it's both. But not to be so coy, my elevator pitch is, “A family estranged by war discovers its legacy and the secrets that bind them forever.” It's a binary story - two settings and two parallel plots develop, and resolve, together.

My first protagonist is a young man in World War Two named Wes who wants to be a pilot but is disqualified for being too tall. That actually happened to quite a few men back then. He has a sister who’s in love with their volatile town miscreant, and their father has Wes help keep that guy away from his sister.


Wes and his sister's sweetheart go to war, and Wes falls in love with a lovely English girl he intends to marry if he survives. But just after she gives him a certain silver ring and steels herself to tell him she's pregnant, he gets called out for what becomes his final mission.


Forty years later, my other two protagonists are a forty-something father and twenty-something son in the late 1980’s who share a love and talent for flying they can’t explain because the dad was adopted. On the same fateful day, the father's birth mother enters his life, and his son meets a girl with whom he has an instant rapport. Leading separate, busy lives, the father learns more about his long-lost parents and the son becomes engaged to his new sweetheart. No one has any chance to compare notes until the wedding, where the bride’s dress is far from the biggest secret to be revealed.

Aha, sounds interesting! How did the idea for the story occur to you?

I had an Uncle who wanted to be a pilot but was killed in action April 1, 1944. He was a flight engineer and by all accounts a rather good one. I can’t remember my dad telling me about him, nor can I remember not being obsessed with his story and flying. When my own son was born, I couldn't help but wonder about whether he would inherit the flying bug my uncle, my father, and I share, and that was the beginning.

I’ve written for fun since having a tyrannical (but fantastic) English teacher in eighth grade. I've always been lazy and found longhand tedious, so I didn’t even try to write anything for public consumption until I got my first computer in 1994. When I did, I thought I might get Greenpeace after me for the number of trees I was going to get knocked down with all the ideas I had. Unfortunately, before I really got “settled in” with my computer, I had a small plane accident that changed my life, and I didn’t get back to my plan for years. In the process, I married my wife (who came with two boys), and writing was once again relegated to Someday. But when 9/11 decimated my career as an airline pilot, I began to make time for it in hopes of making some extra money. So far, it’s going well—I’ve almost made enough to pay for all the electricity my computers have used!

The chaotic disjointedness of my lifestyle, by far. It seems I never get more than a few minutes of mental peace at a time. Occupational hazard of my day job as an airline pilot. I get most of my writing done on layovers, but even there, I have to stay healthy and get a lot of rest so I don’t get fatigued for flying, so eating and sleeping are major time-wasters as far as writing’s concerned. I can’t write well when I’m tired or very hungry, but sometimes even when I'm neither I still have trouble getting into “the zone” when I have ample time. It seems like I really do the most good only when I’m neglecting something else.

What do you absolutely need to have nearby when writing?

Nothing, really. I’ve written (bad) poetry on a napkin, and lots of other stuff on whatever was available (no, not tp, at least not yet), but my inner editor will NOT be marginalized, so I definitely do my best with my laptop. A well-stocked fridge, bar, and cigars, and frequent, silent check-in kisses from the wife don’t hurt, either.

And the ever popular question: If you could have any superpower, what would it be?

Aside from the obvious (flying), I’d have to say invisibility. I’m a paranoid with an inferiority complex and that would really help validate my fears about how rarely anyone's talking about me. But then again it could turn me into a voyeur, too—although then I’d still need to have the flying thing to hover outside people’s windows or x-ray vision (although seeing people like those scanners at the airport doesn’t really sound that hot) or the ability to pass through walls or doors or something, so maybe not so much. I’d probably just stick with just flying.

Quick writing test: Use clergy, weapon, and pudding in a sentence?

“Finding a priest dead on the street’s one thing, but finding a member of the clergy carrying a concealed weapon, with a valid permit, is definitely a new wrinkle,” Mike mumbled as he surveyed the scarlet pudding congealed beneath the savagely beaten body.

Sounds like a mystery in the making! Shoutouts…who’s helped you along?

Without my friend, editor, and cover designer (the chronological order of the roles she’s played) Cassandra Marshall, A Silver Ring never could have fully evolved from a good but obviously self-published effort into what I proudly consider a book that can hold its own in every aspect against any competing title published by a New York house. Because of that one great teacher - Marion, Ohio’s Bob Webb - she didn’t have to waste much time finding and fixing technique, so she could really focus on the story. When I first got her markup, my hackles went up on a few things, but after I gave myself some time to calm down, remember I'd paid for a good critique, and resolve to accommodate her ideas without selling out my story or voice, I found myself improving lots of other things she’d left alone but with which I myself was no longer happy. I honestly couldn’t believe the transformation.


And don’t even get me started on the cover she did for me. It’s one of a very few truly magical things I've had in my life, and I’d laugh in the face of anyone who ever tries to critique it. It’s simply not-of-this-Earth perfect for this story.


Without the layout/formatting help of Jennette Green, from Diamond Press Publishing (http://www.diamondpresspublishing.com/), I’d be curled in a fetal position mumbling to myself right now instead of publicizing my book. I’m not technophobic, but I simply didn’t have time to learn what some swear to be an easy process and still get A Silver Ring out in time to debut at AirVenture. Jennette had my book perfectly formatted for Lightning Source’s printers, Kindle, Nook, and Smashwords in days for less money than a single one of the visits to a mental health professional I'd have needed without her help.


Literally more people than I can name or even remember have played a part in shaping this novel, my effort to see it published, or my writing in general, but about a dozen Tweeps like you have been all-weather friends to me since I joined Twitter in ‘09, and I've learned a lot from your friendships. The other biggies are @KarlenePetitt, @DocumentDriven, @vdemetros, @lit_gal, @Taildragger1, @SentinelChicken, @juliewillfly, and pretty much everyone who regularly contributes to #amwriting and http://www.absolutewrite.com/. I’m indebted to lots of people whose names I just can’t recall because of the fleeting nature of social media, but their contribution absolutely can't be overlooked. It really is a great time to be a writer, if only because it’s so easy to get so much support from such great people. You all make it hard to remain an introvert!


Thanks so much for chatting with us, Nate. And I hope the success of your book takes you to new heights. ;) 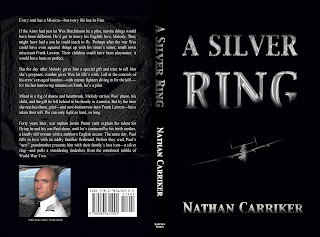 Great interview. So right about gone are the days of being an introvert. Well, to a degree. Good Luck with your book!

Congratulations on your new book, A SILVER RING, Nathan! I loved learning that men were disqualified as pilots for being too tall--I didn't know that. You also answered a question about something I'd always wondered--just how are pilots able to fly such long distances without getting fatigued. Getting enough rest, of course! About carving out time to write--I'm with you! It's always a challenge! Best wishes and WRITE ON!

Thanks for reading/commenting, ladies! Sorry it took me so long to get to answer...it's been insane around here. Trying to move whilst launching an indie novel isn't something I recommend highly! Thanks so much for your support - just got the Kindle version up and Nook/Smashwords will be up soon, too!