Welcome, Sean. Tell us a bit about yourself.

I’m originally from Preston in the North West of England, though I’ve been living in Toronto for some time, and will shortly be moving to Shanghai. I’m an English teacher by day and a writer by evenings and weekends. Literature is my greatest love, but I also have a passion for music and film, and spend much of my time hopping from one country to another.

I’ve been writing since the age of five or six. For some unknown reason (I certainly didn’t inherit any of my writing ability from my parents – they will tell you this themselves) I started writing stories in small notebooks, and continued to do so until my early teens when I laid down the pen for a while in favour of a music obsession. I mostly plagiarised in those first years, writing my own versions of established stories such as Treasure Island and Peter Pan. I also drew my own book covers and illustrations, though this drawing ability seems to have deserted me in adulthood.

After I realised I probably wasn’t going to become the next Noel Gallagher, I hung up my music ambitions and dove headlong into a poetry obsession that lasted quite a few years, until I realised my original love i.e. writing prose, was the way forward.

Tell us about PROJECT HOPE. What’s the story about? 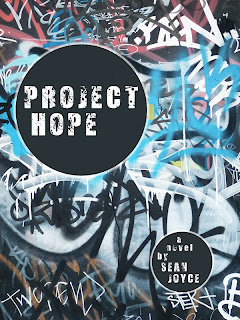 It’s a contemporary dystopian story set in the Zones, a troubled neighbourhood walled off from the outside world. The reasons for this exclusion are hinted at, though I wanted the reader to also draw their own conclusions. The story focuses mainly on Dylan, a nineteen-year-old artist, and his little sister, Lil. Left to take care of her after their parents die at the hands of an epidemic, Dylan does his best to protect her from the harsh realities of life in the Zones. In addition to the rampaging gangs known as hoods, who terrorise the residents, he also has to contend with the guards, the government-assigned security force led by the tyrannical warden.

By night he feeds his burning need for expression, as well as his anger at the world, by secretly painting subversive artworks on the wall. But as the hoods and the warden begin to single Dylan out and tighten their grip on the Zones, he realises he must do whatever it takes to protect his sister, and is forced to move out of the shadows and unite the downtrodden residents.

Sounds cool! How did the idea of the story come to you?

I’m pretty sure the story is a convergence of many different sources, only some of which I’m aware of. I know for sure that I was inspired in some way by Cormac McCarthy’s novel ‘The Road’, and the central relationship in Project Hope is certainly a reflection of the relationship between the boy and the man in McCarthy’s story. I was fascinated by the strength of their bond, and the lengths to which they go to in order to survive and to maintain their faith. I’m not yet a father, but I do have a little sister. And so on some unconscious level, I think I might have decided to write a version that reflected my own life experience and homeland.

I believe my time as a Library Assistant in some of North Manchester’s toughest areas also informed parts of the story. The Zones might be a distorted and exaggerated setting, but it was definitely informed by inner city problems that I see all over the country.

But for the most part, I have no real idea where the story came from. I’m just glad it did, and that it came to me first.

I employ a combination of the above. I do as much self-editing as I can at all stages of the writing process. At some point I’ll deem it ready enough for my very smart and trusted girlfriend to read it, along with another close friend who knows his stuff. After that, I’ll do as much as I can before handing it to a professional editor.

For Project Hope, I had an excellent editor who made a very significant contribution to both the story and the writing style. Without his help, it certainly wouldn’t be half as good.

I start with a very basic situation or idea and go from there. I’ve never planned a book at the starting point. I think you have to let it breathe and gain its own momentum before you start fiddling with a plan. With Project Hope, I had Dylan and Lil and The Zones; that was it. The story followed from these two characters and the setting. However, once you’re past the halfway mark, it might be acceptable to start mapping a route to the finish, but even then there are bound to be plenty of unexpected turns, as well as a few dead ends.

The writing itself is rarely hard. The hard part for me is keeping out external distractions i.e. the internet, TV, people, life.

A coffee. Or else an empty cup, which signifies the promise of future coffee. Headphones, in case I’m in a public place and need to block out terrible music and/or unnecessarily loud conversations. For some reason, I tend to work well in cafes, so perhaps a few strangers chatting at tables nearby is a pretty good writing prop.

Most people say flying, because let’s face it, flying would be incredible. But if I had to give an original answer, I’d say that the ability to speak any language would be a fairly useful super power.

LOL, okay. Quick writing test! Use the following words in a sentence: gratitude, embargo, and manipulate.

The Italians were overcome with gratitude when the worldwide pizza embargo was finally lifted after some cunning political manipulation at the hands of their Prime Minister.

I’m obviously grateful to my girlfriend and all the other friends/family members who’ve always helped me with my writing. I’m also very grateful to my editor Harry Dewulf of Densewords, as well as to all the bloggers and book reviewers who are currently helping me bring Project Hope out into the world.

And you can find Project Hope at:

Thanks for chatting with us, Sean. And good luck with your book!

Thanks a million to Dorothy for giving me the excuse to talk about myself freely!
Posted by Dorothy Dreyer at 6:26 am
Email ThisBlogThis!Share to TwitterShare to FacebookShare to Pinterest
Labels: dystopian, Project Hope, Sean Joyce

I love the new background! I change mine on a regular basis:)

@Ink in the Book: Thank you so much. I keep mine for about a year before I change it again. I work on the details like the header and the post dividers in Photoshop, so it's a little time consuming. :) Props to scrappinblogs.blogspot.com for the background. :)

@Linda: Thanks for stopping by!