Today I'm happy to share the cover reveal for IMMORTALIS: THE HUNTER by Leah Lozano. Check out this cool cover! 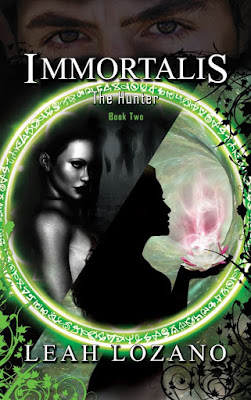 For twenty-one-year-old Lina, there was no denying what she was. Not human. Or the life she would soon leave behind, destined for a planet. Not earth. To claim her power. Please, not blooming flowers! The Fates, it would seem, had a twisted sense of humor. As mortal and immortal worlds collide, one thing is clear; nothing about Lina is conforming to the natural order of things.
From the day she was born she felt it, their eyes on her. Be it from the heavens or earthbound, she was being watched. And now, she could hear them. Their incessant whispers, most of which were incoherent. But one in particular has grown distinct. Beckoning.
He waits for you.
Worse, her birthday just happens to coincide with an ancient prophecy, and now she’s a target, forced to run from the very legends she read about. Dragons and Vampires, Fairies and Lycanthropes, a chance encounter with Poseidon, and a Siren singing Lina’s death song. Now would be a bad time to test the boundaries with her guardian, Archos, but she cannot help herself.

The only real escape she has are her visions, and those too are growing more treacherous and terrifying, especially in the absence of him. His visits always made the strange ones worth suffering through, so where was he?
As her normal reality crumbles, Lina’s intuition ignites a warning of danger more fervent than ever and her revelations are undeniable …

Posted by Dorothy Dreyer at 7:26 am
Email ThisBlogThis!Share to TwitterShare to FacebookShare to Pinterest
Labels: cover reveal, Immortalis, Leah Lozano, The Hunter

Stay away from complex carbohydrates because they produce sugars that are
satta king play bazaar harmful to your body's balance.