Hello, everyone. Sad that the weekend is over? Me too. But let's brighten up our Monday by having a chat with wonderful writer Valerie Kemp.

Welcome, Valerie. Tell us a bit about yourself.

I come from a fairly small town in Michigan. I moved to LA for college because I wanted to make movies and I ended up working in pretty much every aspect of the business and loved it. I eventually made a film, A Change Is Gonna Come, that won several festival awards and aired on television. I moved back to my hometown a couple years ago to be closer to family and to focus on film and writing. I now freelance doing music videos that I direct, shoot, and edit as well as some graphic design and whatever else sounds fun, and the rest of the time I write. I’m hoping to do another short film sometime next year.

Wow, you've had quite an exciting career already. What drove you to make the jump from making films to writing YA novels? 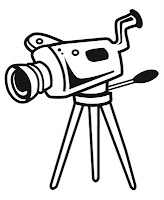 Writing was actually my first love. I always knew I would write a book one day. I was ten when I started my first YA Romance novel. When I discovered filmmaking I was drawn to the idea of creating a visual representation of something I wrote so to me it was really still about writing. I decided to finally give novel writing a try when going over an idea that I’d tried unsuccessfully to turn into a script for years. It finally hit me that there was too much story for a film. It was actually a book. So I said, why not? As for why YA? It wasn’t even really conscious. Pretty much all my film ideas focused on teens. I guess I just never grew up!

What are you working on now and what are the stories about?

I’ve got two projects that are my main focus right now. IMAGINARY HEART is a YA Paranormal Romance. Here’s the blurb:

All sixteen-year-old Rain Miller wants is to find out who murdered her best friend so that she can move past the guilt she feels for not being there when Jenna needed her most, but the sudden reappearance of her childhood imaginary friend Ben has her questioning her sanity, and soon she's too distracted to focus on the killer - too bad the killer's busy focusing on her.

And SLEEPER, a YA Contemporary Sci-Fi:


When 15-year-old Caitlyn Moore is attacked by a substitute teacher who claims she has to pay for what she did, she discovers that not only does she have serious unexpected martial arts skills, she also shares a mysterious connection with the hottest guy in school. What she doesn't know is, why?

They both sound extraordinary. I'd love to read them. Tell us, are you a planner or a pantser?

I’m definitely a plantser. I usually know the big moments in my story, but not the stuff in between. When I get an idea I try to write as much of it down as I can in a sort of free-write. I find I usually know everything through the Inciting Incident (as in I know my MC, and the details of what happens in their life that kicks off the story). Now that I use the awesomeness that is Scrivener, I will make up a few index cards for the other events that I know are going to happen but how I get to them is pretty much all pants. I can’t outline my whole book before I start writing; it takes away the excitement for me. And I’ve found I can get stuck trying to figure out a plot point that if I was just writing the book, I probably wouldn’t even end up using because the story would go in a different direction. I also sometimes write out of sequence. Putting down all the scenes I know for sure are going to happen, and then piecing them together. That comes from my film editing days.

Writing! Or I should say, not writing, but the part right before you start writing, where you open up the file and look at that empty white space and think, I have to come up with stuff to type in there again? Pretty much every single time I write, I have to psych myself up to do it. It seems insurmountable until I actually start typing. Then it’s fun.

Yes, sometimes we just have to take that first step, and then it flows. Who are your inspirations?

So many. I think Stephen King is probably the first writer I read when I was a kid who wrote the kinds of things I wanted to read. He opened my eyes to the world of paranormal and fantasy and on top of that he’s an amazing writer. The way he can create a character in like two sentences, and you feel like you know this person, and then two paragraphs later, that person dies and you’re sad because you actually know what the world just lost? Blows my mind.

I think Christopher Pike was probably a big influence on me because he was the first author I read who let teenagers do really dark things. And then on the other side of the coin there’s JK Rowling who built such an amazing world, and characters I loved and connected to. If I could do just 1% of what she does I would feel accomplished. Also, she’s what got me back into reading YA!

In the mornings, COFFEE. I drink way too much. In the afternoon or evenings, I’ve lately developed an addiction to Trolli Brite Crawlers, which are neon-colored sour gummy worms. Last night I ate them for dinner. It’s a sickness. I need help!

LOL, let's not get into coffee and food addictions; we'll be here all day. ;)

Quick writing test! Use the following words in a sentence: microphone, chocolate, and flashlight.

For my latest documentary, I took my trusty flashlight and a microphone to scope out the cave where the Easter Bunny hides his chocolate.

Excellent! And, um, make sure you share that chocolate, okay? Here’s the part where you thank the people who are supporting you. Whom would you like to give a shout out to?


And also, the YA writing community who are some of the most encouraging, generous, friendly, and informative people in the world. I feel so lucky to be a part of it!

Thank you so much for letting us get to know you and your work, Valerie. I'm excited to see your books in print one day. Good luck!
Posted by Dorothy Dreyer at 9:44 am
Email ThisBlogThis!Share to TwitterShare to FacebookShare to Pinterest
Labels: Imaginary Heart, Kristi Helvig, Lacey Boldyrev, Sisters in Scribe, Sleeper, Valerie Kemp, YA Contemporary Sci-Fi, YA Paranormal

yayy! it was so nice to learn more about you, valerie! thanks so much to you both for sharing!

Great interview--I feel complete now that all the Sisters have been interviewed!

Valerie, you left out the part about how you could easily work as an editor--you've got mad skills and are an amazing crit partner. :)

Thanks for the comments, everyone. It was my pleasure to interview Valerie. I'm so thrilled I was able to get all three Sisters in Scribe. :)

Ooh, yes, DO share that chocolate! LOL. Enjoyed the interview...and I definitely agree, those two WIPs sound really good. Would love to read them in print one day...best of luck!

Thanks for another great interview Dorothy! You do such a wonderful job on them and help to spread the word on other asprining authors....hats off to you! ^_^

Thanks, Gina. You're awesome! :D