Hello, blogosprites! Yes, I just made that up, and that's what I'm calling you today. So, what do I have for you today, you might be wondering. Or maybe you're not, but I'll tell you anyway. Today I've got a great interview with wonderful aspiring author, Margo Rowder.

Welcome, Margo. Tell us a bit about yourself. 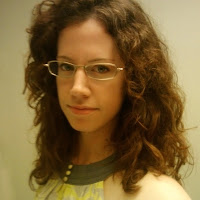 I live in Chicago, where I'm a Senior Copywriter for digital marketing firm Critical Mass. In my 11 years in this biz (What? Time flies!), I've been lucky enough to write for clients like Pampers, United Airlines, Heineken, and Mastercard.

I'll stay on your good side, just in case, lol. How long have you been writing?

When I was nine, I started keeping a journal. Exceptional stuff, if you're riveted by endless blathering about boys. Fast-forward to college, where I discovered fiction-writing in an odd way. I studied art direction for advertising, and part of each assignment was to write a target market profile: a made-up persona our campaign should attract. A quirky meet-cute for sure, but that's when I fell in love with creating characters and toying with voice.


Over my first several years in the workforce, I art directed and/or wrote copy for many clients including Sears, Heineken, Mastercard, Breyer's, and Dove. Copywriting built up my confidence to finally make a deeper dive into fiction. I signed up for a class at the Institute of Children's Literature, and have written fiction consistently ever since.

What is the name and genre of your manuscript?

At the ceremony on Ava's fifteenth birthday, the candle on her cake will determine whether she’s a Whisperer or a Leader.

Though everyone says it’s “written on the wind,” Ava won’t let some weird fairy-tale tradition control her fate. She blows out her candle with a fan hidden behind her back, making herself a Whisperer: one who must not speak or laugh louder than 30 decibels, sing solos with the choir, or cry in public.

The Whisper Rules have kept the world placid and catastrophe-free ever since food riots known as the Great Scream killed half the world. But Ava can’t seem to fit in with any part of this society, so she opts out by remaining silent. As she looks and listens more closely, she sees cracks in the system and hears rumblings of change to come.

Ava finds one glimmer of light in the Rules: they allow her to continue singing with the town choir, next to a certain heart-stopping tenor. She also escapes regularly to the library, the only place Whisperers may hold authority. While discovering others' writings and recordings, Ava finds her own voice. When her mother’s high-powered politico boss plans to forbid Whisperers from music and libraries, Ava is ready to take a stand.

Sounds like a cool premise! How did the idea of the story come to you?

The idea started with a unique ICL class assignment: pick three words from a list, and build a short story around them. I picked "candle," "whisper," and "sing."


All the major points of my story hit me while I flew in a packed airplane from Chicago back home to Dallas – the girl, the society, even the plot. Then again, let's consider the context: I was writing a dystopia in late, post-election 2004.


My resulting story, "Say It, Sister," did not want to remain short. Sure enough, my instructor wrote a note at the top of my finished assignment: "Intriguing – maybe even the beginnings of a book?"

Awesome. So, do you have a critique group/partner or beta readers, or do you self-edit?

I am writing THIRTY DECIBELS through another ICL class, so I get professional critiques with every assignment. I've spent this year in multiple single-focus edits (characterization, conflict, sensory detail, pacing, de-padding, etc). I highly recommend this focused method – because then at least something at the desk is focused!


That said, I have much work ahead. I won a three-chapter critique from musewrite.com in a recent Evanston library fundraiser. The resulting comments from (fellow SCBWIer) Trina Sotira were invaluable, so I've gone back for more. Trina is critiquing the full manuscript as we speak. After that, I hope to send the story to two rounds of beta readers. (I'm looking for more readers. Please contact me at the info below if you're interested!)

Sounds like an excellent plan that's already succeeding! What’s the hardest part of writing for you?


Let's go back to art: My mom used to do pointillism with pen and ink. Essentially, she'd make each picture from thousands of dots. Painstaking, right? But part of the prep is planning where the dots should go. Writing can be just as harrowing, but much less efficient. Instead of putting down a dot right where it needs to go, as a writer you sketch in where you think it might go, cut away the extra, move the dot, give it a different center, and then cut it down again. But hey, it's fun. Especially when you get the chance to use an esoteric art metaphor.

Okay, my head is spinning, lol. Let’s get to know you on a deeper level. What do you absolutely have to have nearby when writing?

The "what" isn't so tough: Laptop, earplugs, and water. Food every few hours, as long as I remember to hunt, gather, or... um, order.

I'm much choosier about the "where": I write more easily away from home. I can totally relate to the writer in a movie scene who rents a hotel room to work. I usually write at The Book Cellar. When John Green (one of my favorite favorites) was in town this spring promoting WILL GRAYSON, WILL GRAYSON, he mentioned he used to write at The Book Cellar. How cool is that? Maybe after I pay my "coming-of-age writing at Book Cellar" dues, he can pass me some sort of jewel-encrusted torch.


Not only that, my friend and fellow YA writer/SCBWIer James Kennedy (he of THE ORDER OF ODD-FISH) also visits the shop to write and chat. Hilarity usually ensues. I also spied Audrey Niffenegger this summer, waltzing in looking fabulous to sign copies of HER FEARFUL SYMMETRY. The store has such a great vibe for writing, the people are fantastic, AND they serve gelato and fine beers!

Quick writing test! Use the following words in a sentence: trampoline, onions, and nuns.

Onions at lunch, trampoline at recess – the nuns must be hazing that gassy new girl.

Hehehe, excellent sentence! Here’s the part where you thank the people who are supporting you. Let's hear your shout outs.

My son's father Jed, first and foremost. Because of his help, I wrote my first draft of THIRTY DECIBELS during our son's first year – quite possibly the worst timing for such an undertaking. Jed and his mother (who helps us so much with Archer) are simply amazing.

I also have to thank all the writers, poets, bloggers, and readers I've met on Twitter (you know who you are!).The writing community there is exceptional. They consistently open my eyes to new ideas and cheer me on when I #amwriting.


My fellow SCBWI'ers have been a tremendous support – James Kennedy and Trina Sotira as I'd mentioned, plus Adam and Ronni Selzer. And Crystal Chan and Jane Hertenstein for keeping our Chicago chapter so active. This city is a phenomenal place to be a writer.

I blog semi-regularly at http://margorowder.com
I tweet @margorowder
I contribute poetry to http://undeadpoets.com
I commit dumb Facebook acts at facebook.com/margocole

Thank you so much, Margo, for letting us get to know you. I wish you continued success with your book. Let us know when it's on the shelves!
Posted by Dorothy Dreyer at 10:39 am
Email ThisBlogThis!Share to TwitterShare to FacebookShare to Pinterest
Labels: Margo Rowder, musewrite, SCBWI, Thirty Decibels, YA Dystopian

As usual, Dorothy, you have introduced us to an interesting new writer!!

Margo, I wish you the best of luck on your writing journey.

Dorothy, thank you so much for this opportunity! I'm honored you invited me to your lovely blog.

Shadya and K.M., thank you so much. For the record, I've never been so patient. Writing just demands it – but you probably knew that. :)

Shayda! Please excuse me for the misspelling. :)

Thanks for the shout-out, Margo! Great interview!

Boo yeah, Margo! Best of luck on your manuscript, and thanks for the kudos! And cheers to all of us late-blooming beer drinkers out there...:)

Of course, Crystal!
And thank you – cheers indeed. :)

Fantastic interview. I feel like I know you so much better now. I'd love to join you at the Book Cellar for a beer and a edit. LOL. 30 Decibels sounds fascinating and I look forward to it. Amazing you wrote it with your youg'un being so... young. Super Woman!
Hugs, Margo. Great interview the both you.

Hugs, Jodi!
Nothing super here. As you saw in my shout-outs, I had a LOT of amazing help.

Jodi, anytime you're up for a trip out of exile... er, I mean Texas, you totally should come to Book Cellar.
(I kid, because... I come from there and I can.) ;)

Your book sounds awesome. I can't wait to read it someday!

Thanks so much, Mary! (And if you're Mary J. from Plano, I've got you down as a beta reader. Thanks again!)

Thank you, Erica. I'm glad you think so!

I love to hear where authors get their ideas and also the ideas. Your book sounds amazing and so creative. Good luck with everything! From one Margo to another--(you don't see that name very much!)

Thank you, Margo! I appreciate the support very much.
BTW, I hope you're enjoying your new chapter and not missing us in Chicago too badly...

P.S. I've never met so many Margos than in the writing community. I find this very cool. :)