Today I'd like to welcome a very interesting writer to We Do Write. When I read the biography on his website, I was pretty impressed, and now I'd like to introduce him to you. Say hello to Alex George.

Hi, Alex. Tell us a bit about yourself.

I am an Englishman, living in Missouri. I’ve been here for over seven years now (my wife is from mid-Missouri and we moved from London to be closer to her family.) I’ve been married to my wonderful, long-suffering wife, Christina, for twelve years. We have two beautiful children, Hallam (9) and Catherine (5). By day I am an attorney; I have my own firm in Columbia, Missouri. I’m also involved in running a water park at the Lake of the Ozarks; consequently I have been known to clown about in a shark suit.

Wow. You'd make a well-rounded character in a book! How long have you been writing?

I’ve always enjoyed writing but I suppose I began seriously half way through the 1990s. I was always complaining about the books I was reading, and people kept telling me that I should shut up and write my own. So I did! My first novel was published in England in 1999. I’ve written four books prior to the novel I’ve just sold to Penguin. They’ve been sold in the UK, France, Germany and Italy, but none of them has been published in America (although I have had some very nice rejection letters from American publishers!) I wrote full-time for a few years after my second book was published, but now it has become more of a secondary career again. I get up at five o’clock every morning and write for two hours before the children wake up. Then I go to work. It does make for rather slow progress sometimes and I find it difficult to stay awake much past ten o’clock in the evening!

From what I understand, your current book is untitled as of yet, but can you tell us what the story is about?

It’s the story of a young couple who leave Germany in 1904 and make their way to America. We then follow the lives of the family over the course of three generations. The book spans all of the twentieth century – America’s century. And while it’s a book about them and the adventures they encounter in their new country, I hope it’s also a story about America itself.


As with all my books, there’s a lot of music in it. The narrator of the book is one of four brothers and they sing together in a close harmony quartet. It’s been a lot of fun researching that, although I think I’ve driven my wife slightly mad with all the barbershop CDs I’ve bought.


I had an awful lot of fun writing it. In addition to the principal characters in the main family, I had an opportunity to populate the fringes of the novel with a lot of characters whom I really enjoyed creating. Among others, there’s a prim church organist who strangles chickens with her bear hands and a bicycle-riding dwarf. Two U.S. Presidents make cameo appearances, as well.


And no, no title yet. I have been writing this story for years, always hoping that a good title would fall out of the sky, but it hasn’t happened yet. Soon, I hope! Next time I’m going to start with the title, and do it that way around.

Sounds like a plan. How did the idea of the story come to you?

Well, I was casting about for a topic, having begun, and abandoned, a couple of (awful) ideas. And the thought occurred to me that I had done something that not many people have the opportunity to do, namely move to another country to live. I’m an immigrant, in other words. And America is, at its core, a country of immigrants. So I began to explore that theme. Around that time, my wife’s great aunt Ethel passed away. We attended her memorial service, and half way through, four men (who I later discovered were brothers) stood up and sang Abide With Me in beautiful four-part harmony. And while I should have been thinking: poor old Ethel, she had a good life, what I was actually thinking was: of course! A barbershop quartet! So there I had the two pillars on which the rest of the book is constructed: the story of a family of immigrants, and close-harmony singing. Kind of like The Godfather Part 2 meets The Sound of Music.

Being sort of an immigrant myself, in that I'm an American who moved to Germany, I find that quite interesting. So tell us, what’s the hardest part of writing for you? 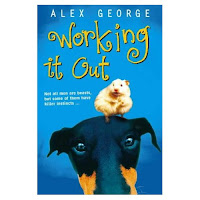 Knowing when to stop. The French poet Paul Valery said, “Poems are never completed, merely abandoned,” and the same applies to novels. But at some point you have to take a deep breath and let your baby out into the world to see if it will walk on its own. I’m a perfectionist, and know that if I do one more review then I’ll improve the book a little more. But at some point you just have to let go.

LOL, I think my problem is I let go too often. Any tips you’ve learned about writing you’d like to share?

Tons, but the most important would probably be: write every day. Even if it’s only a little. If you’re serious about writing, you need to make it a priority. Find a time to write, and stick to it. (That’s why I write early in the morning. I know that there will be nothing else competing with my attention then, no excuses to do something else instead.) If you do that, then – little by little – words will appear on the page. The most important asset that you can possess as a writer is stamina. Writing books is a long slog; you need the drive and energy to propel you through the less inspiring moments (which can be much of it!) And, of course, you should read and read and then read some more.

Great tips. Who are your inspirations? 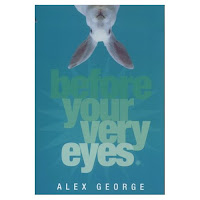 I read all the time (see previous remark!) and books, rather than people, serve as my principal inspiration. Writing is a craft. There is always room for improvement, more to learn, and higher hurdles to clear. Reading a wonderful novelist like Richard Powers (to choose one of many literary heroes more or less at random) gives me a slightly vertiginous sense of all that can be achieved within the form, and shows me how much further there always is to go.

Peace and quiet. I can’t write in coffee shops, or places like that. I sincerely wish I could listen to music when I write, but it’s impossible. It’s a complete distraction and my productivity plummets. I work in a very small room in my house, facing away from the window. I need to minimize the risk of distraction when I sit down to write. It helps that I know I only get two hours a day; that concentrates the mind.

I think I would like to be able to fly. It would make it much easier to get back to England.

Quick writing test! Use the following words in a sentence: needle, orange juice, and teepee.

When my daughter spilled her cup of orange juice I couldn’t help but needle her about it, even though it wasn’t really her fault; it had been a long and stressful day, and I was (as my son pointed out) both a wigwam and a teepee – in other words, I was too tense. (Sorry.)

Don't be sorry, that was surprisingly unique! Here’s the part where you thank the people who are supporting you. Let's hear your shout outs. 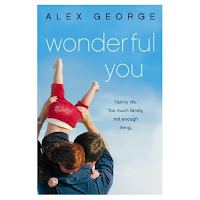 I am lucky to have had four wonderful reading angels, who have read this latest book in various drafts and have offered nothing but honest appraisal and unstinting encouragement throughout. Every writer should be so lucky to have just one such reader, let alone a quartet. They are my wife, Christina, and my three great friends Elaine Johnson, Jennifer Perlow, and Allison Smythe.

My agents, Bruce Hunter in London and Emma Sweeney in New York have shown endless faith, patience, and perseverance. And of course I’m grateful to Amy Einhorn at Amy Einhorn Books for having faith in the book and applying her enormous skill to the editorial process.

Excellent! Thank you so much for chatting with us, Alex. Good luck naming your novel, and I wish you lots of success in all your writing endeavors.
Posted by Dorothy Dreyer at 7:06 pm
Email ThisBlogThis!Share to TwitterShare to FacebookShare to Pinterest
Labels: Alex George, America, Germany, historical fiction, immigrants

Another very informative interview. I've been following Alex on Twitter for a few months now, and he has a great handle on the field and his craft. He's extremely friendly and an outstanding role model for aspiring writers. The man knows his stuff. I think the novel sounds brilliant; being somewhat of a history buff, I always love new stories that incorporate these fascinating eras. It sounds like you've incorporated some great cultural references.

I really like the writing test sentence. Good interview!

Hmm...interesting how he works music into his stories, I'd be curious to see how it translates to readers. Sounds to me like the writing of this book was as thrilling as it being published...something that speaks to the potential longevity of the author to carry on the story. The enthusiasm makes a lot of difference. LOL on the WORKING IT OUT cover art...love the picture. Thanks for sharing your story and thank you Dorothy for the great post!