So, hands high. How many of you are hustling and bustling? Yes, I'm raising my hand as well. But I love you all so much, I had to take the time out to post another interview for you. Let's meet Nancy Brauer.

Hi, Nancy. Tell us a bit about yourself.

I wear many hats: writer, web programmer, graphic designer, and geologist. Yes, really. I have a degree in geology that I only use when out hiking, which invariably results in bringing another rock home. You never know what you'll find, from fossils to unusual minerals.


So, yeah. I'm pretty much a card-carrying geek. I live in southwestern Virginia with my boyfriend, a dog who's allergic to nearly everything, two allergy-free cats, and no cable or satellite TV. We cry when our Internet connection goes down.

Over ten years now. It's hard to believe it's been that long, but I'm glad I kept at it. Some of my early stuff is cringe-worthy. I'd like to think that my recent work induces few to no cringes.

Tell us about STRANGE LITTLE BAND. What’s the story about?

SLB is the story of two very bad people who work for a very bad company and fall in love despite everyone's best efforts. The bad people are Addison and Shane, two self-centered psychics. Their employer, the Triptych Corporation, "encourages" Addison to have a child. When she and Shane learn that Shane was the sperm donor, drama ensues. 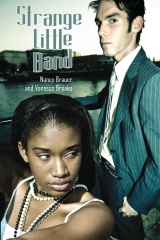 Addison and Shane are just as manipulative as Triptych, so there's a lot of scheming as they try to build some sort of relationship to raise their son. Along the way the antiheroes make important discoveries about themselves, each other, and the company that all but owns them. There's angst, romance, violence, sex, and some comedy. A little bit of everything. :)

My coauthor Vanessa Brooks and I have been writing together for several years. We have two characters that we keep coming back to. One version of them is Shane and Addison. They're how the characters turned out if key events in their youth went badly.


Initially Vanessa and I emailed each other scenes with Addison and Shane misbehaving just to amuse ourselves. We kept going and going. Before we knew it, we'd racked up over 100,000 words! The next logical step was reworking all of those scenes into a single narrative. The end result is SLB.

Plot. Definitely plot. Vanessa and I are great at writing individual scenes. Start with a conflict and run with it. It's hard for me to step back and figure out how to tie it all together. That's the main reason why we initially released SLB as a web serial. We had so much material, plenty of character arc, and the beginning of a plot. We needed something linear to force us to fit all of the pieces together and fill in the gaps. Knowing that a small but loyal audience was waiting for the next installment kept us moving forward.

Music and coffee. I write on my laptop, so I usually have Pandora or Radio Paradise playing in the background. As for coffee, it's now either half-caf or decaf. My caffeine habit was getting out of hand until a few months ago. But I still like the taste of coffee, and associate it with writing.

Telepathy. There's a reason why I write about psychics so much. :)

Quick writing test! Use the following words in a sentence: interrogate, marching band, and cartographer.

"Interrogate!" the wannabe dictator--actually a slightly unhinged cartographer--shouted over the marching band's din.

Wow, wasn't expecting that, lol. Here’s the part where you thank the people who are supporting you. Let's hear your shout outs.

First and foremost, thanks go to everyone who read SLB over the year and a half it ran as a web serial. Your encouragement, interest, and silly comments were are huge help to Vanessa and me.

My boyfriend Brandon definitely gets a shout out. He's heard more about imaginary people than he's probably ever wanted. He kicks butt at brainstorming, too.


Rachel Phillippi and A.M. Harte have my undying gratitude for proofreading the final draft of SLB.


Other people who are made of win, in no particular order, are M. Jones, Paige Baldassaro, Lyn Thorne-Alder, Kim Grandstaff, MCM, Steve Spalding, Brian Goff, Charissa Cotrill, my family, and many, many more. Seriously, I could go on all day.

You can find all things SLB at http://www.strangelittleband.com, including the first four chapters in ePub, Kindle, and PDF formats. The paperback edition of SLB is available through CreateSpace and Amazon. The Kindle version is in the Kindle store and Amazon.


I occasionally blog at http://www.nancybrauer.com. The site is primarily my online portfolio. If you want to stay abreast of my everyday inanity, I'm @tenaciousN on Twitter and on Facebook.

Thank you so much for letting us get to know you and your book, Nancy. I wish you lots of success!

Oh my hand is raised high for certain! Hard to believe Christmas is this week! *shakes head* In regards to STRANGE LITTLE BAND...sounds like the title fits the story well, which can be one of the toughest steps to take. Nice job on the writing test. Way to think on your feet. Great interview ladies! Thanks for sharing!

Yeah, Vanessa and I had a tough time coming up with a suitable title. Thanks for reading and taking the time to comment, GMR!