Happy Valentine's Day, everybody! I hope your day has been full of love, in one form or another. To fill your day with more loving feelings, I've got an interview full of YA love. Let's talk to awesome author Rachele Alpine.

Hi, Rachele! Tell us a bit about yourself. 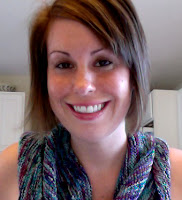 Well…I describe myself on my blog as a young adult author represented by Lina Sion at Global Literary Management. My YA novel CANARY is currently on submission to publishing houses.
I teach high school during the day, am a MFA fiction writing student at night and use any free time in between to write, write, write!


I am a lover of Chipotle, Diet Rootbeer, sushi, traveling, knitting, dogs, music and spending time with my friends and family.

So, all around a fabulous person. How long have you been writing?

I’ve been writing since I was little. My mom has notebooks full of scribbles that I filled when I couldn’t even write, a picture that I made in kindergarten that says, “When I grow up I want to be a famous writer,” and diaries that chronicle my entire life growing up. I’ve always loved to read and write.

Tell us about CANARY. What’s the story about?

Sure! Here’s the paragraph I used when I was querying…


Kate Franklin’s dad is good at coaching basketball; what he isn’t good at is communicating with Kate and her brother Brett. When her mother dies, he shuts down, throwing himself into basketball as a way to cope with his grief, leaving Kate alone in silence.


When he lands a job at Beacon, Kate finds it easy to fit in when she starts dating a player on the team, while her brother, shy and weak, is rejected by the school. Kate quickly learns that in order to be a part of this group you need to overlook the perks given to the athletes who openly disgrace her brother for not being one of them.


The players take their power too far one night at a party and Kate is assaulted. She doesn’t stay quiet about what happens, but her accusations aren’t accepted by the Beacon community. The school rallies with the team and lashes out at her. Ugly rumors are created to destroy Kate and her credibility. She’s not praised for her decision to be truthful, but instead, it brings terrible consequences. The final blow comes when her dad tries to silence her in order to protect the team.


The world that Kate believed was safe is now her worst enemy, and Kate must decide whether to stay silent or expose the corruption, destroying her father’s career and bringing down a town’s heroes.

Wow, that sounds intense. How did the idea of the story come to you?

There’s a few things that influenced the story.


My dad coached basketball and I grew up surrounded by the sport. I saw the world of the game and how players were often exhalted and treated like gods. This attitude towards athletes hasn’t changed, in fact, it seems to be in the media quite often. It angered me to see sports figures or stars get special privileges because of who they are. This sense of entitlement can also transfer to high school and I wanted to explore that dynamic.


The title came from something I learned in grade school. It’s stuck with me ever since. My main character, Kate, writes,

“In history class we learned how canaries were used in coalmines to warn miners of dangerous gases.
A canary was lowered down into the deep dark bowels of the mines.
If a bird was pulled back up alive, then the miners knew it was safe to go down.
If it died, the bird was sacrificed, an early warning saving the lives of the miners.
The miners also brought the birds down with them. A canary sang and sang and if the bird stopped singing, the miners would evacuate. The bird was more sensitive to the harmful gases and the miners would have enough time to get out safely. The birds, however, usually didn’t.
I imagine the birds doing what was natural to them, and having that used against them. Their tiny lungs and that sang were what ultimately destroyed them.


I think about the canaries and how their purpose for the miners was to breathe in the air until it got too toxic, until it killed them.”


I just thought that this was such an incredible thing. These birds were just doing what came naturally and that was their downfall. I started to think about how this metaphor could apply to people and that’s where the idea of Kate speaking out against something that has happened to her and her father and the school trying to silence her. The main conflicts in the book came from this image of a canary in a mine.

I'm sure a lot of aspiring writers out there would like to hear about how a story evolves once an agent gets a hold of it. Has CANARY changed much during the revision process?

Oh boy, has it changed! We’re now about the start our next round of submissions to publishing house and the book that I signed with Lina Sion for is a lot different than the one that will be going out to editors. We’ve spent a lot of time revising it, including about four months of extensive work after our first round of submissions. The biggest change was the main character of Kate. She was very passive and not too active. Everything in the book happened to her. She’s now very bold, outgoing and someone you want to cheer for. My agent and I had both seen the movie Easy A and loved how Olive wasn’t a victim of the rumors about her, but instead made the letter A and worked her new reputation. That’s how we wanted Kate to be, so I kept that spunky confident attitude in mind while I revised.

I think finding time where I can really devote myself to writing. It seems like life is always so busy during the school year and when I sit down to write I’m often too tired to do so. That’s why the weekends and the summers are a godsend to me.


I think it’s important to surrounded yourself with those who support you. Writing is a tough job and it’s very solitary because you’re the one who is creating the words. You need a support system of friends and family who understand and are willing to both give you time to work on writing and rescue you and take you away from your writing when you need a break. You also need to surround yourself with other writers. They know what you’re going through, they’re cheering for you and know how hard writing can get. If you can find two or three great readers, you’ll be able to develop a support system where you can bounce ideas off of each other and look for advice.

Great tip! Let’s get to know you on a deeper level. What do you absolutely have to have nearby when writing?

I love writing in coffee shops. My favorite is the Starbucks in the Barnes and Noble by me. What could be better than writing with books all around you? I always need something to drink and my ipod. Sugar is a must and I usually snack on gummy candy when I write.

Super speed! How great would it be to fly through the mundane tasks like cleaning, making dinner, showering, blowing your hair dry? If I had super speed, I’d have a lot more time for writing!

Quick writing test! Use the following words in a sentence: tricycle, caterpillar, and wedding cake.

The little boy rode his tricycle around and around the caterpillar on the sidewalk while eating a slice of his sister’s cake from a wedding that never happened.

I have GREAT support and I’m so lucky for that. My family has always nurtured my love of reading and writing from a young age, my finance understands that there are days and nights when I need to sneak away to write in my office undisturbed or to spend a weekend day writing at a bookstore. My school is excited about my writing and has allowed me to attend some great writing conference and start a creative writing program. Locally, I’m a part of a great Cleveland book club filled with published authors who keep me sane and my MFA program where the other writers get what I’m trying to do. My agent, Lina, loves and believes in this book and wants to see it published as bad as I do. And lastly, some of my greatest supporters are my blog readers and my online writing buddies who all have play a role in the creation of my book.

Come say hello to me on my blog!
freckle-head.blogspot.com

Rachele, thank you so much for talking with us. Your book sounds amazing and I wish you the best of luck with it.
Posted by Dorothy Dreyer at 6:48 pm
Email ThisBlogThis!Share to TwitterShare to FacebookShare to Pinterest
Labels: Canary, Global Literary Management, Lina Sion, Rachele Alpine, YA Contemporary

I had the pleasure and honor of beta reading for Rachele. I loved and was intrigued by the story of Canary. Rachele is an awesome writer buddy and fellow teacher. I wish her all the best on this next round of submission!

Yay! Rachele rules. One of the first bloggers to ever reach out to me with a helping hand. Great interview too, well done ladies!

Thanks for posting the interview! :)

It's awesome to hear more about CANARY (I'm reader of Rachele's blog, but I forget things sometimes) and to hear about its evolution. Also, she's such a sweetie, and that definitely comes through here.

Thanks to both of you for this wonderful interview!

Great interview! So interesting to see how works can change when working with an agent. Best of luck Rachele!

Great interview! Thanks, Dorothy and Rachele.

Great interview. It was really nice getting to know Rachele and about her writing.

Love the brief bio....sounds like she has her priorities in order. Yay for the love of dogs! *high five* Agree with you Dorothy on the book description...INTENSE is the first word that popped into by mind too. The way a manuscript changes from creation to publication never fails to amaze me. Nice job on the writing test...though I think the sister is probably upset at the turn of events. Best of luck to you Rachele....and thanks for the great interview Dorothy! ^_^