Today is "Rosenmontag" - or Rose Monday - in German speaking countries. It's followed by Violet Tuesday, also known as Mardi Gras. In the spirit of the flowery names, I've brought you an interview with a Lilly. Author Lisa Lilly, that is. Let's get to know her. 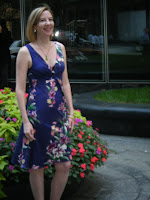 Welcome to We Do Write, Lisa. Tell us a bit about yourself.

I’m an attorney and a writer. I’ve practiced law for over eleven years, and three and a half years ago I started my own firm. I love being my own boss. I've had short stories, poems and articles published, and recently I published my novel THE AWAKENING independently. Being on my own for my law practice worked well, so I decided to try to translate what I’ve learned about running a business into my fiction writing career as well.

I started when I was 6 or 7 after visiting relatives in Pennsylvania. My cousin LaVonne, a teenager, kept a notebook where she wrote poetry and journal entries. I thought everything she did was cool, so I bought a spiral notebook at the local drugstore as soon as I got home. I had no idea how to write poems, except that they should rhyme. My first one included lines about a cow that kneeled in a field. (Hopefully, I’ve improved since then.) After that, I didn’t stop. One of my grade school friends and I used to write novels and trade them back and forth, sometimes inspired by current books we were reading, sometimes based on original ideas. At least, to us they seemed original.

Let's hear about THE AWAKENING. What's the story about?

It’s about a young woman, Tara Spencer, whose mysterious pregnancy turns her life upside down, starting with sidetracking her plans for medical school. I strove to be realistic as to how the people around her would react in real life, as opposed to in a book or a movie. Her fiancé severs all ties with her, assuming she must have slept with someone else, and her parents question her mental health when she insists she’s never had sex. The only person who believes she’s still a virgin is a stranger, Cyril Woods. He belongs to a religious order  that is investigating whether Tara’s child could be the next messiah, fulfilling signs from the Book of Revelation. But when Tara reveals her child will be a girl, the order turns against her, seeing her as the potential mother of the anti-Christ who must be destroyed before she can trigger the Apocalypse. Tara must fight for her life as she seeks answers to whether she and her child are meant to save the world or destroy it.

Wow, interesting! Is this a series?

Since I was a teenager, I’ve been troubled by how religious establishments view and treat women and how our culture reflects that. A few years back, I read a lot of books about women and spirituality, and the goddess cultures versus the three major religions today, Judaism, Christianity, and Islam, which are male-centered. At the same time, The DaVinci Code was very popular, and I was struck by how no one talked much about what I found so interesting about the book, which was the idea of a female heir to Jesus Christ. I started thinking about what life would be like for a young woman today if she became pregnant as a virgin, particularly if she wasn’t religious at all, and she just wanted to be left alone to figure out what was going on with her body. What would that do to her life? Would anyone believe her? And if they did, how would that change when she discovered her child would be a girl? And, finally, what might she and her child mean for the world?

All of the above. When I started The Awakening, I submitted my outline and first three chapters to a thriller writers’ retreat and was accepted. My teacher was author Gary Braver (an amazing writer – my favorite of his is Elixir), and he and the aspiring writers in the group provided detailed critiques. I later joined an on-going critique group. I also spend two or three revisions toward the end of the writing process focused solely on line editing – sentence structure, grammar, flow, proofing. Finally, I have a friend, also a lawyer, who is a wonderful editor and who can read the same manuscript ten times and still catch typos and continuity errors. Lucky for me he is willing to do this free, as I could never afford the hourly rate he gets for doing that in his law practice. :)

Very much a planner. For my first serious attempt at a novel, I didn’t outline and ended up tossing out half the manuscript when I realized the story really started right about at what I’d thought was the middle. For a while I created extremely detailed outlines, but I found that too restrictive. Now I outline major plot turns, then write from one to the next.

Turning off my internal editor. It’s the voice in my head, which sounds a lot like my mother, that picks apart every word I write so that I’m tempted to spend hours rewriting the first paragraph instead of moving forward. It kicks in when I’m writing the first draft of a legal brief, too. The good thing is that for my legal work, I’m always writing on a deadline. I’ve learned to tell that voice that it doesn’t matter if I write something bad, I’ve got to get something on paper, and I can fix it later. The reality is, usually what I write is much better than it feels like it is at the time, and I have lots to work with.

A cup of tea. Often it’s cold by the third sip, which is a good thing, because it means I’ve gotten really absorbed in my writing and forgotten it.

The power to heal people, both physically and emotionally. Life is wonderful in so many ways and also can be very hard. I’d like to offer healing and peace to everyone.

Probably the lifespan of genetically-altered worms.

LOL, yeah that qualifies as weird. Quick writing test! Use the following words in a sentence: river boat, mountain goat, and promote.

This could easily come out a lot like my first poem!

“The artist sat on the river boat deck, sketch pad in hand, hoping the scenic trip would inspire her to draw an eye-catching mountain goat for the advertising contest, and wishing she didn’t need to go to such lengths to promote her art.”

Thriller writer Gary Braver, who I mentioned. He’s provided so much useful advice, and, just as important, encouragement, and I love his books. Also the writers and volunteers at the WoMen’s Literary Café, especially author Melissa Foster. They provide a wonderful support network for writers and also many ways for readers and writers to connect. And my friend Steve, editor and attorney extraordinaire. Most important, everyone who has read The Awakening and my short story collection. Thank you for buying the books and for investing your time in reading them. I do my best to make it worth your while.

The Awakening is available on Amazon for the Kindle and Barnes and Noble for the Nook:


The Tower Formerly Known as Sears and Two Other Tales of Urban Horror is available on Amazon:


My author website, where you can also find links to my blogs: www.lisalilly.com

Lisa, thank you so much for chatting with us. Your book sounds so intriguing, I'm already dying to know what happens! I wish you lots of success.

Thanks so much for interviewing me! It was great to talk with you!
Posted by Dorothy Dreyer at 6:37 am
Email ThisBlogThis!Share to TwitterShare to FacebookShare to Pinterest
Labels: Lisa Lilly, The Awakening, The Tower Formerly Known as Sears and Two Other Tales of Urban Horror

Great interview, and now I want to google genetically altered worms:-) Lisa, we share a desire to heal -- maybe one day we'll figure out a way.

Thank you for the kind words. I am blessed to call you my friend and you are an extraordinarily giving author.

Thanks to Melissa for your comment, and to Dorothy for hosting me on the blog, which I really appreciate. I love the tie to Rose Monday! As for the genetically altered worms, I first read about them in the Wall Street Journal in an article about scientists experimenting with extending life. Perhaps to 1000 years. Which may relate to the next book in The Awakening series...

Great interview ladies. Interesting premise for the book...though I'm seeing shades of Supernatural, Rosemary's Baby, etc, but that makes sense given the topic and writing practices of your childhood. Certainly leaves you room to explore all aspects of the plot in the follow-up novels. Loving the power chosen...and yes, that is definitely something I've never thought to google, though I might have to now. LOL. Thanks for sharing and best of luck on the writing!