Dare to be Indie: Guest Post by Laxmi Hariharan

GUEST POST BY LAXMI HARIHARAN: DARE TO BE INDIE

Laxmi Hariharan's Bio:
While born in India, Laxmi Hariharan has lived in Singapore and Hong Kong and is now based in London. She has written for various publications including The Times of India, The Independent, Inside Singapore, Inside Hong Kong and Asian Age. Indian mythology inspires her work. When not writing, this chai-swigging technophile enjoys long walks in the woods, growing eye-catching flowers and indulging her inner geek. Her debut novel is The Destiny of Shaitan.

Do you dare to be Indie?

“So are you going to self pub?” I asked a friend who has spent years polishing her manuscript, collecting rejection slips and looking out for that long awaited email which asks for the entire novel. “I don’t know, how do you know when you should, and what happens if I were to do so only to have an agent interested in my work?” To go Indie or not, that is the question. A hotly debated issue which has kept many a writer—with a burning need to be read—up many nights.  My take: If Indie movies are accepted, why not Indie books?

Rob Kroese, author of the self published, bestselling, humorous, apocalyptic novel Mercury Falls and its sequel, Mercury Rises has a great analogy. The last I saw, he was on stage in front of an audience of famous writers, august agents and established publishers , likening the league of published authors to an elite night club, with gatekeepers, who decide who gets in and who does not. It struck a chord with me. So taking a cue from Rob, I have put together my own quiz, to help you find out whether you should go Indie or not.

Here are the questions:


If you said yes to at least eight of the above ten, then I believe the force is strong in you. You may be among the fortunate few to take a punt on yourself.

But wait! Before you press that enter button and send the words skimming out over the electronic waves, pause. Have you been true to yourself in your text—Really? If you are still standing upright, then there is more to tell. Go back, revisit, revise, rewrite, until hand on heart, you can say you have stripped yourself bare. When you have died a few deaths getting the novel to that place where exhaustion weeps in the arms of elation, then, you know all has been said. Now you have one last thing to do. Make sure your baby is perfect—every infinitesimal millimetre brushed to its Sunday best—for once it is out there you will be reborn, as your Author Avatar. People will actually read you. Many will love your prose, some will hate it and tell you so. Can you deal with that too?  If the answer is still yes, then what are you waiting for? 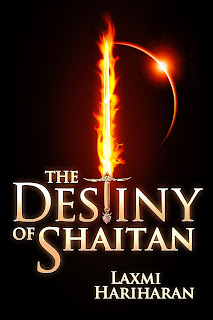 The Destiny of Shaitan Book Summary

Kindle bestseller The Destiny of Shaitan is a delicious blend of gods & humans, sacred & profane; a gripping ride offering a glimpse into your own power.

Partially set in a futuristic Bombay, this coming of age story is painted against the backdrop of a post-apocalyptic world.

When Tiina accompanies Yudi on a mission to save the universe from the ruthless Shaitan, she seeks more than the end of the tyrant; she seeks herself. Driven by greed and fear for his own survival, Shaitan bulldozes his way through the galaxy, destroying everything in his path.  Tiina wants Yudi to destroy Shaitan, thus fulfilling the prophecy of Shaitan being killed by his son. But she finds that Yudi is hesitant to do so. The final showdown between Tiina, Yudi, and Shaitan has unexpected consequences, for Shaitan will do anything in his power to win the fight.  The stakes are high and the combatants determined. Will Shaitan's ultimate destiny be fulfilled?

Amazon buy link: ($0.99)
http://www.amazon.com/dp/B007M2IBH8?tag=tributebooks-20
Posted by Dorothy Dreyer at 5:11 am
Email ThisBlogThis!Share to TwitterShare to FacebookShare to Pinterest
Labels: Dare to be Indie, Indie, Laxmi Hariharan, The Destiny of Shitan, Tribute Books

Hi Dorothy Good to be here via a web friend, good to meet and read about yet another Indian author Laxmi
This is really amazing to note that the pages are devoted to your fellow authors and writers from around the world, Keep up the good work.
I am joining in,
Keep us inform
Keep writing
Best Regards
philip

Dorothy, thank you so much for featuring Laxmi today :)