Help me in welcoming author Ashley Hodges Bazer to the blog today. We'll be chatting with Ashley about her novel ASYLUM.

Hi, Ashley!Tell us a bit about yourself. 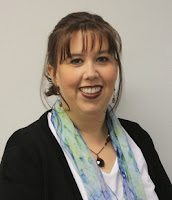 I am a pastor’s wife and a stay-at-home mom of three. My children, affectionately referred to as “the Dingoes”, are six, five, and two. Before I married, I earned my degree in theatre from Arizona State University. I was a stage manager for Disneyland’s entertainment department, and later, a producer for Focus on the Family’s daily radio broadcast with Dr. James Dobson.

I’ve been writing since the sixth grade. I mostly wrote short stories or poems to entertain friends. The idea of writing novels never really suited me until about seven years ago when I was pregnant with my son. I had just left the career field, gotten married (to a pastor!), moved across the country, and found out I was going to be a mom…all at once. My identity took a major hit. Through writing, I found me again.

Tell us about ASYLUM: THE CIRCEAE TALES. What’s the story about? 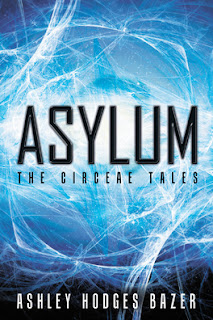 Asylum is actually a standalone novel in a series titled The Circeae Tales. I like to say it’s “classic sci-fi meets a Christian worldview.” The Circeae system is embroiled in a cosmic war between the Progressive Legacy, the iron-fisted government, and the Ghosts, a band of freedom fighters dedicated to protecting the Logia. The Logia are gifted followers of Prince Ternion, the former ruler of the Circeae system.

Chase Leighton is a captain in the Ghost ranks. He is a Logia, and married to Trista. The Ghosts receive a distress call, prompting Trista to assist. She is captured by the Legacy and handed over to their Experimental Medicine agency, where she is publically declared dead as a result of formal execution. Dr. Terces, the head of ExMed, intends to remove Trista’s memories, transforming her into a servant of the Legacy.

The Ghosts discover the truth behind the Legacy’s ploy. Naturally, Chase wants to rescue his wife. After receiving a signal from Trista’s beacon, Chase and his men are ambushed and arrested, then sentenced to the Straightjacket, a prison facility for the criminally insane. They face months of brutal “therapy” before they decide to riot and take over the ship.

As Chase plans the men’s escape, he learns that Trista is on board. But when they come face-to-face, she calls herself Krissa. Chase struggles with learning about the identity the Legacy created in Krissa and trying to reach the woman he knows as his wife.

As I often do, I was daydreaming about a couple of characters—a man and a woman conversing. The man knew the woman, although she didn’t know him. Why would that be? Amnesia? Brain injury of some sort? I’ve always had a morbid fascination with the idea of someone being treated for mental illness who was perfectly healthy. As this daydream conversation developed, that fascination began to surface. The man, being treated in an asylum, was perfectly sane, while the woman, believing she was perfectly sane, was actually the one suffering. That twist brought about the rest of the story.

We live in a small, remote town, so I don’t have the opportunity to meet with a critique group. I have used beta readers, and they have been very helpful. I’m finding the best thing for me—following beta readers—is to put my manuscript away and come back to it after a month or two. At that point, I have a more objective eye.

Definitely a pantser. I don’t write chronologically. I usually start somewhere in the middle and flesh it out from there.

Revising. As I am writing, I have to constantly remind myself to just get it down on the page. I can go back later and rework things. But sometimes, I get caught up in the tediousness of revising and want to walk away. And a lot of times, I do for a week or two.

Confidence. I’ve written six novels, but I still hesitate to classify myself as a writer. Writers know what they are doing. They know the ins and outs of the craft, yet I feel like I’m still learning. I have to remind myself that even the best writers are still learning.

A cup of vanilla flavored tea and my copy of Flip Dictionary by Barbara Ann Kipfer.

The ability to travel through time and space. How neat it would be to visit 15th century England, or to witness the signing of the Declaration of Independence. To see planets with many moons. To experience the future before it happens. It would be a great power, and as they say, “With great power comes great responsibility.”

I don’t know if it’s weird, but definitely most bothersome—anatomy of a spider. I don’t like having creepy crawly things larger than life on my computer screen. But in my young adult novel, Xadrez, one of my characters transforms into a spider…so it had to be done.

Quick writing test! Use the following words in a sentence: rock concert, emu, and spilling.

My leather pants are ruined from spilling soda all over them last night at the rock concert because an emu somehow escaped from the zoo and decided he wanted to rock out with the rest of us.

Playing with the Dingoes or crocheting. I love to crochet and watch TV—namely, Doctor Who or Firefly.

I’m thankful for the folks at WestBow Press and the Munce Group. I am published because I won their 2012 Writing Contest in July. My mom, Janie—to whom Asylum is dedicated—for reading my manuscript and telling me she loves what I’ve written! My brother, Bryan, for making an awesome map of my universe. My husband, Gary, for watching over the Dingoes when I want to write. My Dingoes for their love and support and superior marketing skills. My friends who have read and loved the book. And my readers for taking a chance by picking up a copy of Asylum. Also, Dorothy, thanks to you for supporting budding authors like me by giving us these opportunities to be part of your awesome blog.

You're very welcome! And finally, where can people find you and your book online?

My website is http://www.AshleyBazer.com. We have some exciting interactive updates coming soon. My book is available through most online retail booksellers such as Amazon.com or BarnesandNoble.com, or through the publisher at WestBowPress.com.
Posted by Dorothy Dreyer at 6:51 am
Email ThisBlogThis!Share to TwitterShare to FacebookShare to Pinterest
Labels: Ashley Hodges Bazer, Asylum, Munce Group, The Circeae Tales, WestBow Press