Today we're chatting with author Beth Pond about her novel, PODIUM FINISH. Join me as we get to know Beth and her book.

Welcome to We Do Write, Beth! Tell us a bit about yourself. Hobbies? Career? How long have you been writing?

I’ve been writing since I was a little kid. It didn’t matter where I was. I always had a notebook and pen at the ready. I’d sit at the family computer for hours and write stories. I was also pretty sporty as a kid, something that has definitely influenced my writing. I competed in track and field in college (shot put and hammer) and am currently working toward earning my 1st degree black belt.

Tell us about PODIUM FINISH. What's the story about? 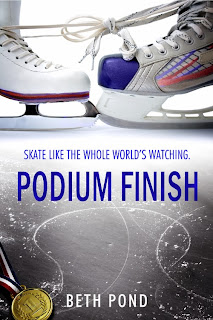 With six months until the Olympic Games, seventeen-year-old Harper's life is pretty much perfect. She's fighting for the starting spot on Team USA Women's Hockey, and for the first time ever, she has a crush on a guy who likes her back. She feels like the luckiest girl in the world, until she runs a risky play at practice and breaks her knee, thereby sentencing herself to six weeks in a cast and possibly ending her Olympic dream before it even starts.

For seventeen-year-old Alex, being anything less than the best is unacceptable. That's why, after a miserable debut season at the senior level, the former junior national singles champion switches to ice dance. Her skating partner, Ace, is an "all skating all the time" type of guy, which would be fine, if he'd stop keeping secrets about the real reason he and his former partner broke up. Now is not the time for second thoughts, but how can Alex skate her best if she can’t trust her partner…or herself?

As the pressure to make the Olympic team builds, the girls must rely on each other, because if there’s one thing they both know, it's that the only thing harder than skating to the top is staying there.

Podium Finish was inspired by the 2006 Torino Olympic Games. I found the athletes’ life stories fascinating—the struggle, the sacrifice, the unknown, and hopefully, the joy, and suddenly, Alex and Harper were born.

Podium Finish went through several revisions, so it was a combination of both. I had some friends who read drafts at various stages and gave me wonderful suggestions, but I did a good portion of the editing on my own. I’m currently working on two new projects and having critique partners and beta readers has proven incredibly valuable. It’s nice to have cheerleaders in your corner.

I try to be a planner, but I’ve written some of my favorite scenes by the seat of my pants.

I have a major internal editor, so often times the hardest part is just getting the words on the page and letting them breathe.

Mountain Dew! Or Diet Coke when I’m trying to be “healthy.”

I’d love to be able to fly. No more getting stuck in traffic or pricey fill-ups! Plus it would just be an awesome super power to have in general.

Nothing really jumps out as being the weirdest thing I have googled, but I was reaching organ donation for a book I’m working on. I’d done so many searches that organ donation ads started appearing on the sidebar of my browser and facebook. Good thing I wasn’t researching anything too scandalous!

Quick writing test! Use the following words in a sentence: Olympic, mirror, harp

Oh boy! This is hard! Umm…I can’t think of anything funny, so I’ll go for something somewhat realistic:

The Olympic ice dancers’ moves mirrored one another so well that the sportscasters couldn’t harp on the technique.

Finish this sentence: If I'm not writing, I'm probably ... at the gym. Seriously, I’ve gotten some of my best ideas while on the treadmill.

I think the dedication in Podium Finish says it best: “For my mom who drove me to every practice, my dad who took time off from work to see me play, and for my brother, Danny, who always cheered for the other team.”

I’d also like to give a shout out to my best friend, Ana. She used to wake up at the crack of dawn and ride 3 hours with my mom and brother to see me compete in my college track meets. If that’s not friendship, I don’t know what is. Seriously, she’s a saint, and she’s always very eager to read whatever it is I’m working on.

Podium Finish is available for Kindle and Nook. It’s also on goodreads, so please mark it as “to-read.” I have a blog: www.pondacrossthepond.blogpost.com and you can follow me on Twitter @BethPond90.

Posted by Dorothy Dreyer at 6:40 am
Email ThisBlogThis!Share to TwitterShare to FacebookShare to Pinterest
Labels: Beth Pond, olympics, Podium Finish, YA

Thanks for having me!