Welcome to the Book Blitz for STORMFRONT, the second book in the UNDERTOW series by K. R. Conway, set to release August 15th 2014! 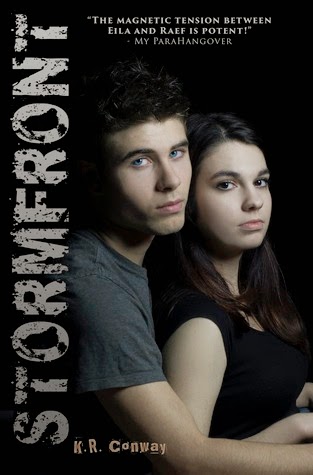 Not long ago Eila Walker’s choices were limited: death by a bullet to the head, or at the hands of her beloved bodyguard, Raef. Now, five weeks after Raef triggered her power and she nearly leveled a historic mansion, Eila is dealing with the fall-out of her decisions. While she doesn’t remember dying in the arms of the soul thief who loves her, she knows that Raef remembers everything about the night he nearly killed her.

Now on the mend and attempting to keep one step ahead of the FBI, Eila and her team of misfits are desperate for a bit of normal. Eila is trying to navigate high school, while her BFF Ana is cautiously hanging with past-boyfriend and soul thief, Kian. Shape-shifter, MJ, is trying not to piss off his mother, while Raef is coping with his fears that Eila will never be safe.

But just as “normal” seems within their grasp, a powerfully built newcomer arrives. Raef knows the scarred man as a Blacklist Dealer – a soul thief, who peddles the names of humans who deserve to die. Eila, however, knows him as the protective hunter from the woods, who she nicknames Thor. Before long, Raef and Eila realize they’ve met the same killer, and he has one hell of a story to tell the five friends . . . if Raef doesn’t murder him first.

STORMFRONT is the second book in the Bestselling UNDERTOW series.

The smell of cinnamon and coffee lured me out of my warm cocoon of sleep. I blinked into the early morning sunlight filling the parlor and listened to the echoing quiet of the house. The soft drip of Mae’s coffee maker confirmed that the power had returned and the brilliant blue outside the window revealed a crystal clear sky. I realized I must have nodded off in front of the fire last night, because I was still camped out on the floor, but somehow I had acquired what felt like a pillow. It was a bit too firm though.

I moved slightly and realized the pillow was attached to a perfectly sculpted forearm . . . and hand, which had my long hair gently woven through its fingers. Something warm and solid tightened around my waist and my eyes widened as I realized Raef was tucked against my back, one of his arms supporting my head and the other clasped around my waist.

Sweet baby dolphins everywhere, Raef was SPOONING me, pressed firmly against my back.

Now acutely aware of my surroundings, I could feel his warm breath on the back of my neck as he slept. I wanted to turn to him, but I was terrified he would wake and realize he had jumped headfirst into those revisions we had briefly mentioned last night.

Heck, he was WAY MORE than touching me. He was holding me as if I would disappear - as if I would fade into the molecules in the air. I swallowed and stayed still, taking inventory of his hard body against mine, and how we seemed to fit so perfectly together.

A metal pan scraped against something in the kitchen, breaking the silence of the house, and I felt Raef take a deep breath and stretch ever so slightly.

I stayed still, hoping he would think I was asleep. Hoping he wouldn’t suddenly shoot across the room, taking with him the warmth and safety I felt in his arms.

He didn’t move for what felt like forever, keeping his arm around my waist, but then I felt him softly spread his fingers out over my stomach. It took everything I had not to spontaneously combust.

I felt his forehead touch the back of my neck and he drew a slow, deep breath against my shoulder blade. It sent electricity fanning out from my skin and down my arm. All ability to control myself fled my body and I dragged in a shaky breath.

He loosened his grip and I rolled onto my back, his arm still behind my head and his hand just below my belly button. His fingers grazed the area of my skin that was now exposed thanks to a too-short tanktop.
God bless the discount rack at Abercrombie.

“Good Morning,” he replied, quietly. “I didn’t mean to wrap myself around you like that. I don’t even remember doing it.”

“You just needed a snuggle-buddy,” I replied, flashing him a knowing grin, but my face started to flush. Oh my god . . . that was so lame.

Raef’s gave a soft smile and was about to reply, but a paisley pillow shot up from behind him and wacked him in the back of his head. “HEY!” he protested.

“Will you two SHUT UP!” moaned Ana who was sprawled on the floor as well. “I think I might actually throw up in my mouth. Will you be my snuggly-swuggly pooh bear? UGH! Seriously – I’m gonna barf.”

I blushed hot and sat up as Raef’s hand fell away from my tummy. He slowly got to his feet, tossing the pillow that attacked him onto the couch. He stretched, looking really well rested for the first time in weeks, and his black t-shirt rode up just enough to torment the heck out of me. 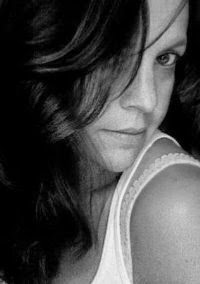 K.R. Conway has been a professional writer for most of her adult life.  She has been a journalist since 1999, an editor, graphic designer, critique partner for other writers, novelist, and book reviewer. She teaches the devious art of telling lies for money to various impressionable young people (i.e. she teaches fiction craft classes for teens and adults). She is also on the Board of Directors for the Cape Cod Writers Center, a PAL member of the SCBWI, and the driver of a 16-ton school bus. She tweets her random thoughts @sharkprose and is on Facebook, because even her BFF’s dog is.

K.R. Conway is the author of the UNDERTOW series, which includes last year’s Amazon bestseller, UNDERTOW, and this August’s release, STORMFRONT. She lives on Cape Cod with her two children and husband, two weird dogs, and a cage-defiant lovebird that sleeps in a miniature tent.

Posted by Elizabeth Holloway at 9:46 am
Email ThisBlogThis!Share to TwitterShare to FacebookShare to Pinterest
Labels: book blitz, giveaway, K.R. Conway, rafflecopter, Stormfront, YA Paranormal, YA Romance, YA Urban Fantasy