The final chapter in the war for Ourea ends with blood.

Kara Magari is an icon. A hero. The people love her. The royalty tolerates her. She has everything—an army, allies, and a close circle of chosen family. They believe she will end the war, and they shouldn’t. She’s as scared as they are. She just can’t show it.

The war she accidentally started ends with a final battle that will either save or enslave her people. She will do anything to win—until she learns the cost of victory.

Braeden Drakonin is afraid of what he’ll become when he takes over his father’s kingdom—that much authority can change a man. But his father has already tried to kill him more than once, and it’s time to end his reign. Braeden’s armies are ready. His strategy is foolproof. His generals are waiting for the order to attack. It’s only in the final seconds before the battle begins that he realizes he missed one crucial detail—the traitor.

He looked at her—really looked at her, with a gaze that almost stole the smile from her face. She held on, despite his scrutiny. She’d successfully killed Niccoli this time. She absorbed a Blood. She would bring Niccoli’s remaining guild to its knees. Andor—of all people—couldn’t shake her.

His boots thumped against the floor as he came closer. Every slow step chipped away at her smirk. He knelt on the mattress and leaned in, setting a hand on either side of her head. His fingers stretched against the wooden headboard in her periphery, but she never broke eye contact.

He inched closer until the world blurred around him. He was turning this on her, calling her bluff. Maybe he knew her seductions were always a tease, that she never followed through. Perhaps he even figured she imagined Michael on the face of any man who invaded her space, who got too close.

“What are you up to?” His breath rolled over her cheeks.

She grinned, letting the joy of her plan wash through her. “It’s quite elaborate.” 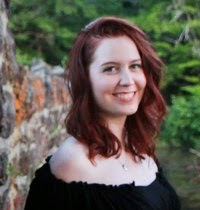 S. M. Boyce is a lifelong writer with a knack for finding adventure and magic.
If you would like to receive an email alert when Boyce's next book is released, sign up here:
http://www.smboyce.com/newsletter/ (Your email address will never be shared, and you can unsubscribe at any time.)

Word-of-mouth is crucial for any author to succeed. If you enjoyed this novel, please consider leaving a review at Amazon, even if it's only a line or two. Your review will make all the difference and is hugely appreciated.