Happy Monday, everyone. I hope you've all enjoyed the weekend. Let's dive into the new week by joining the CITY OF ROSES blog tour and chatting with author Donovan Pruitt. Be sure to enter the rafflecopter at the end of the post for an awesome prize. 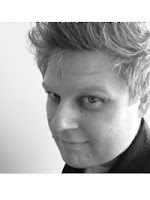 Donovan Pruitt has a passion for science fiction and fantasy, especially those titles that trend toward young and new adult storytelling. City of Roses was his first standalone book as an indie author, though he has also written for video games and was previously published as a co-author in the fantasy genre. You can visit him online at www.KalaEmpire.com or join the discussion on Twitter @KalaEmpire.

Hi, Donovan! Welcome to We Do Write. Tell our readers a bit about CITY OF ROSES.
A young man ventures to his lost love’s childhood home in the abandoned city of Pripyat, Ukraine. When a sudden accident puts him off- 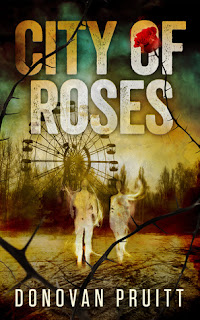 course, he awakes to discover a lively and vibrant culture living in a nearby village and a woman who reignites his heart. But something sinister lurks in the shadows, and he must face the terror and help defend the village from evil before it is lost forever. Go beyond the tragedy of Chernobyl and discover the magic in the City of Roses.

City of Roses is a deeply personal love story tangled up in a mystery of reality-bending awesomeness that comes from the main character’s tragic past and the Chernobyl disaster. The story progression is inspired by Eastern European methods of storytelling and includes references to real Ukrainian history and folklore/mythology. There’s action, romance, mystery, and monsters. I hope people love it.

How did the idea of the story come to you?
My second degree was in Russian Language and Culture, and I’ve always wanted to do something special with that education. Researching Ukrainian folklore/mythology was a real treat, and combined with a lifelong fascination with the paranormal and Chernobyl, I put together something that I consider really special. It’s a thinker. I want my readers to ask questions about the themes, the meaning, and ultimately to walk away with a desire to learn more about Ukrainian culture, Pripyat, and Chernobyl.
Are you a plotter or a pantser?
I’m a pantser. The only time I outline, it’s usually because I’m just curious how much more I have left to write. Even then, my chapter outlines consist of one or two words, like “battle.” I keep everything stuck up in my head, and I like to see where that takes me.
What’s the hardest part of writing for you?
The first half of a book is always the hardest for me to write because I dwell on the details way too much. I nitpick everything, trying to be too much of a perfectionist to make sure I’m really nailing the tone, the characters, all of it. That’s the stuff I should just fix in the second draft, but I always end up editing while I go along, and then doing it all over again anyway.
What do you absolutely have to have nearby when writing?
My kitty slash keyboard cover Anastasia, apparently. She insists.
If you could have any super power, what would it be?
Something mental. Telepathy or psychokinesis. Jean Grey/Quentin Quire, basically. Added bonus if I get to be the Phoenix later in life, too.
What's the weirdest thing you've googled?
The Backstreet Boys lineup, after my wife swore to me that Jessica Biel married a Backstreet Boy. We were both wrong. Can you tell it’s not our genre of music?
Haha, I can imagine the conversation. Finish this sentence: If I'm not writing, I'm probably ...
Playing video games. It’s my downtime reward and my nightly addiction. I have done some writing for video games before, but playing them has been a lifelong passion.
Here’s the part where you thank the people who are supporting you. Let's hear your shout outs.
The biggest and most special would be my wife for giving me this opportunity to try my hand at being a full time writer. This is an amazing opportunity and experience so far, and I refuse to let her down.
Thanks for stopping by the blog!

Thank you for having me!