Release Day: NEIL FLAMBE AND THE DUEL IN THE DESERT by Kevin Sylvester 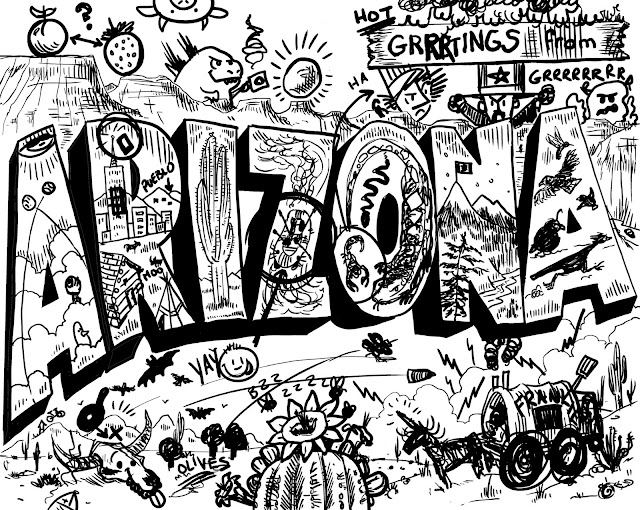 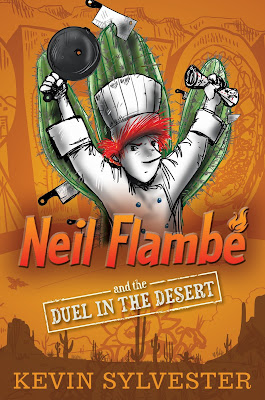 Neil has lost his beloved restaurant. Though he misses it dearly, he and his friend Larry are headed on a new adventure. They are travelling to the Salsa Verde ranch in Arizona with their new food truck to participate in the legendary food truck gathering, the Broiling Man Festival. Once he arrives, Neil discovers that the Verde ranch is in danger of foreclosure, at the mercy of a developer who wants to turn it into housing and a factory farm. The only hope for the ranch is a treasure map left behind by the very first Verde, a chef who discovered a mine while escaping from a murderous army colonel. Neil and Larry are on a quest to find the treasure, but each time they think they’re close to finding something, they come up with nothing. Will the boys find the mine—and the treasure—in time to save Salsa Verde ranch?
Check out Neil's very own website here!

My 6th Neil Flambé book is now out, and it's a miracle (for me) that this ever happened. Like all true miracles, it happened because of other people.

The idea for the series began as a kind of joke, or (more accurately) a dare among my friends at the CBC Radio show, Sounds Like Canada.

It was 2007 and the final Harry Potter was coming out. Who would take Harry's place in the hearts of children all over the world? They dared me to come up with "the next big thing."

Enter the ginger, obnoxious but incredibly talented Neil. I love Neil. He grew out of my own interest in food, travel and mystery. (I sometimes joke that I threw Julia Child, James Bond and Miss Marple in a blender and got Neil.)

I wish I could cook like he does. I wish he would be nicer to people.

What was amazing was how easily the original story flowed from my brain. We aired a ten-part mini-series in the summer of 2007, and I was sure it would be a great, real, book.

But what was equally amazing was that I had a long way to go to actually write a good book. The radio plays were fun, but nor for kids. They were too foodie, too precious, too violent... and not funny enough.

So this is where the "larger message" of my little essay comes in. To be a writer I found that the idea was'nt enough. You have to (a) finish the book. But you also have to (b) realize that the first draft (or 27 drafts) will suck. So then you (c) seek help.

My friend and editor Charis stepped in, and offered to read my first feeble attempts. She ripped into me good.

Oh yeah.... (d) don't take criticism personally. Listen to what the person is saying. What she was saying to me was that I needed to actually think of who I was writing for. I had written a book about a kid for an audience of adults like me. "Make it fun,." she ordered.

Thanks goodness I listened (after a few moping days of self-pity).

Enter Larry, Neil's goofy, non-foodie cousin. He's the kid readers' entree into the world of high cuisine and amazing food. And he also gave the series the humorous interplay that it was lacking with just Neil moping around.

He helped flesh out the fully human world that NF now lives in. It's been a world that has seen them under attack, framed for murder, apparently killed, and losing everything that held dear.

But they have always, and still, have each other.

So, this might be the last book in the series. That's actually not my decision. If enough people buy the book, it won't be.

If it is, man have I had a good ride. And I owe it all to my friends. 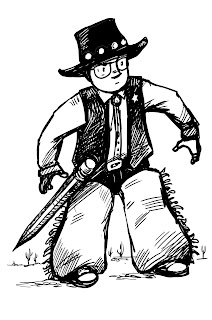 KEVIN SYLVESTER is an award winning illustrator, writer and broadcaster.  His new sci-fi series MiNRs is now out from Simon and Schuster. His series The Neil Flambé Capers is already a bestseller and critical success. Students across Ontario picked 'Neil Flambé and the Marco Polo Murders' as the Silver Birch winner for fiction in 2011! There are 5 books in the series so far, Neil Flambé and the Bard's Banquet is the latest, and the 6th book is due in Spring 2016.

He now splits his time between his attic studio in Toronto and the radio.