Planet Janitor: Custodian of the Stars -- Interview with Chris Stevenson

Today we welcome back author Chris Stevenson to catch up with his publishing life.

Hi, Chris, and welcome back to We Do Write. Catch us up on your publishing journey since we last spoke. What's new with you?

Let’s see…Intrigue Press published The Girl They Sold to the Moon, a YA SF story. It won a major grand prize award, sponsored by a publisher, so I was happy about that. I was equally happy in getting so many offers for my next YA dark fantasy, Screamcatcher. My agent and I decided it wouldn’t that bad of an idea to make it into a series, which I did with two more books. That one is now out on major sub. I finished and polished a paranormal thriller, Earth Angel; a children’s picture book, The Mysteries of the La Brea Tar Pits; finished a military espionage thriller entitled Iron Maiden; got halfway through a sequel to Planet Janitor and a third of the way through a dystopian SF called Sky High. You can tell it’s been some time since I’ve been here! 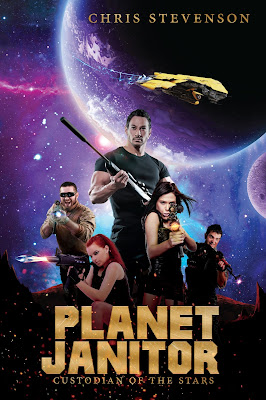 It’s the story of a ragtag group of space junk collectors who get an offer they can’t refuse from a famous celestial real estate company. The mission requires a 12-year light speed jump and cryo sleep out to a newly discovered planet in the Tau Ceti system. The exact instructions are not given to the crew, but only hinted at: they must clear and cleanse a huge track of land and construct tall barrier walls. Before they even start the job they find a terrible sight, and have to deal with it while they finish construction. Soon all hell breaks loose, suffice to say. Planet Janitor, the new release, is a small omnibus with new front matter stories, revision/rewrites and cover. It can best be described as Robinson Crusoe meets Starship Troopers.

Did you do research for the book?

I had to do some simple calculations on orbital mechanics and light speed limitations. I had to really figure how I could invent a “nuclear bang pod drive” that would propel the ship to near the speed of light without blowing the craft to pieces. I used “chopper gun foam” for the barrier walls and had to look up heavy construction equipment and give the machines a new high-tech face.

Without spoilers, what's your favorite scene in the book?

One of the male crew members is out picking flowers in a lush valley on the foreign planet. He sees another crewmember gathering flowers, too. They both ask each other what’s up. One of them admits that his girlfriend has told him that she is pregnant.
The other crewmember rolls his eyes and says, “It must be contagious. Mine gave me the same news yesterday.”
To which his friend nods at the flowers and says, “Do you think these will do any good?”
“Not a chance.”

Were there any scenes that had to be cut?

None cut, but one had to be added. I had to give Captain Zaz a temper tantrum for losing something very precious to him. In fact, he goes on a rampage, which just isn’t like him at all. Oh, I had to cut down on some ship’s log entries.

Got any tips for aspiring writers in this genre?

Space opera science fiction? Uuhg—read the new stuff and see where it’s going and how much more innovative and creative it is compared to the past. Be patient and let an extraordinary premise grab hold of you. Try to find something very unique. Research all that you have to so you can properly world-build. Keep in mind that a great number of science fiction writers have degrees in the core sciences, and/or they are very smart tech nerds. The competition is blisteringly fierce, especially for this genre. Give it a lot of thought before you proceed.

Any parting words of wisdom?

If you hit a wall and find yourself blocked, take the advice of Stephen King, Jo Rowling and Anne Rice—push your way through it. Your eyes are the wrong eyes to be prematurely critical. You can bet that your writing (of that book or short) is not that bad at all. You’ve been mistaken. It’s like having hallucinations inside your imagination. Accentuate the positive—eliminate the negative. Guess what movie that’s from.

Thanks so much for stopping by the blog, Chris!


It’s always a pleasure to be here. I’m in love with your blog and blog site.

Chris Stevenson , originally born and raised on the beaches of southern California, moved to Sylvania, Alabama in 2009 and settled in with his twin sister. His occupations have included newspaper reporter, front-line mechanic and federal police officer. He has been writing off and on for 36 years, having officially published books beginning in 1988. Today he writes science fiction, fantasy, paranormal romance, young adult, adult thrillers and horror. He has a total of 10 titles appearing on Amazon. He was a finalist in the L. Ron. Hubbard Writers of the Future contest. He writes the informative blog, Guerrilla Warfare for Writers (Special Weapons and Tactics), hoping to inform and educate writers all over the world about the high points and pitfalls of publishing.

Amazon link to all books:  http://www.amazon.com/Chris-Harold-Stevenson/e/B001K8UUBK/ref=ntt_dp_epwbk_0