Happy Book Birthday to DAYBREAK RISING by Kiran Oliver. Check out this diverse, dystopian fantasy thriller! It's a unique and exciting read. And that cover? Wow! 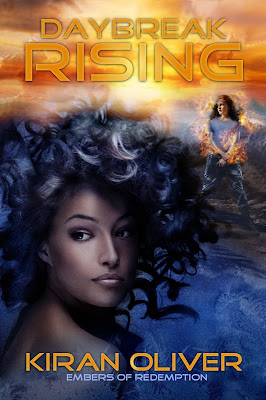 Celosia Brennan was supposed to be a hero. After a spectacular failure that cost her people their freedom, she is offered a once-in-a-lifetime chance at redemption. Together with a gifted team of rebels, she not only sets her sights on freedom, but defeating her personal demons along the way.

Now branded a failure, Celosia desperately volunteers for the next mission: taking down the corrupt Council with a team of her fellow elementally gifted mages. Leading the Ember Operative gives Celosia her last hope at redemption. They seek to overthrow the Council once and for all, this time bringing the fight to Valeria, the largest city under the Council’s iron grip. But Celosia’s new teammates don’t trust her—except for Ianthe, a powerful Ice Elementalist who happens to believe in second chances.

With Council spies, uncontrolled magic, and the distraction of unexpected love, Celosia will have to win the trust of her teammates and push her abilities to the breaking point to complete the Ember Operative. Except if she falters this time, there won’t be any Elementalists left to stop the Council from taking over not just the country, but their entire world.

Congrats to Kiran! I really like this cover too!