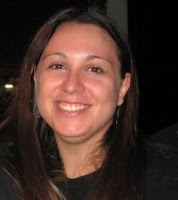 Charolette is a 28 year old aspiring writer from Minnesota. When not writing, she is usually working as an RN, attending classes for massage therapy, or spending time with friends and family. She has been reading since the age of 3 and started writing stories while still in elementary school. Her writing has improved somewhat since that time.

What is the name and genre of your manuscript?

The title is Lycanthrope Moon, and I guess it would be considered Urban Fantasy.

For Grace Larkin, there is a definite line between reality and delusion. There has to be, when one works with the mentally ill. Her world is painted in bold strips of black and white. Anything logic cannot explain is a delusion; a fictitious creation of a disturbed mind. Then comes the day Connor Marshall is admitted. He believes he is a werewolf, an impossibility in Grace’s view. But as the days pass and the world grows stranger, the question of if he is indeed delusional keeps reappearing to bother her.


The day he escapes from her hospital, she believes she has seen the last of him. Before the day’s end, however, she finds herself at his mercy with no visible escape. As he shows her possibilities she never would have believed could exist, Grace soon discovers that nothing is as her training and education have led her to understand. Like it or not, she is drawn into a new and strange world populated by beings that are never quite what they seem. Friends appear from the most unlikely places, and enemies seem to be lurking in every shadow. She is astounded to learn that a war has been raging within the city - a war that no one even knew of. Her heart calls her to follow this new path, but that way lies madness and death.


The only question in her mind now is not whether werewolves are real, but if she – and those she has come to care so much for - will survive.

Very exciting! I'm all for werewolf stories. I can imagine it as a book to read while huddled in bed into the late hours of the night. How did the idea of the story come to you?

It was inspired by a number of sources. For one thing, I am an RN working with people with severe and persistent mental illness. Some of the people I work with have very entrenched delusional systems that they firmly believe in, and some of their delusions actually sound like something out of a science fiction or fantasy novel. I haven't yet encountered someone who believes they are a werewolf, but the concept I started with was, what if a person believes something that society states could not possibly be true, but happens to actually be true? How could that person prove that they aren't delusional to someone whose job dictates that they believe they are?


My other major source of inspiration was the movie Underworld, although the plot and characters weren't the fascinating part for me. I loved the idea that there wasn't just one werewolf, but a whole community of them, and that some of them were able to control their transformation. With so many werewolf stories, it's just one monster terrorizing a community. If you think about it, that really doesn't make sense, because both wolves and humans are social animals, so why would a cross between them be a solitary beast? I started with the idea of a werewolf community, and then fleshed it out and gave them a culture and a history as well.

You’ve put a lot of thought into the story, that’s great! What point are you at in the writing process?

The story is basically done, though I keep finding things to revise. Right now, I am researching agents and working on query letters.

Do you have a critique group or beta readers, or do you self-edit?

I do a lot of self-editing, but I've also had a few people read through and give me feedback on things that don't make sense or need tweaking. I don't really have a formal beta reader, though.

I write chronologically, from the beginning of the book to the end. I know sometimes writers will jump around and write the scenes they already have in their head that they want to have happen, but I don't like to do that. For one thing, when I write chronologically, often by the time I get to that scene it's changed a bit because of what happened earlier. Sometimes the hardest part of writing for me is getting from one scene I really wanted to write and connecting it to the next one. I'm not always sure how I'm going to get there, even if I already know where I want it to go.


Aside from that, right now the hardest part of writing is finding the time. I'm currently kind of in between projects. I finished Lycanthrope Moon, and I'm researching the next one I want to write, but I'm not yet in the throes of plot and character construction like I get when I'm in the middle of writing something. Also, I am currently going to school full time and working full time, so that doesn't leave a lot of extra time for writing if I also want to do those other bothersome things like eat and sleep. I'll be done with school in December, though, so I'm hoping to have a lot more time for writing after that.

I think the best tip for any aspiring writer is just to write. Write, write, write as much as you can. Let the story that's in your head come out. Don't worry about how it's coming out at first. As Maureen Johnson said, give yourself permission to suck. Everyone does at first. That's what revising is for. Just get words onto paper however you can, and learn as you go. It also helps to be a voracious reader, I think.

I totally agree on both counts. So, do you have an idea of your book’s cover art?

I do, actually. I haven't done any mockups of it, but I have a pretty good picture in my head. The basic idea is the face of a wolf with brilliant green eyes superimposed over the image of a full moon. The title would be at the bottom, and my name at the top, in (much) smaller print.

My main inspiration in life is my mother. She doesn't write, but her passion in life is horses, and she has been living her dream of having her own riding stable for the past couple decades. She's the one who showed me that it is possible to live your dreams, and in fact, there is no other way to live your life.


As far as favorite authors, though, I grew up reading Robert Heinlein, Marion Zimmer Bradley and Anne McCaffrey. Later, I discovered Lois McMaster Bujold's Vorkosigan series, and I would have to say that they are still my favorite book series. I also really enjoyed the Hunger Games series by Suzanne Collins, and am looking forward to Mockingjay when it comes out in August.

I'm looking forward to that too! Let’s get to know you on a deeper level. Tell us three things about yourself.


Big family! And I love horses. You’re so lucky! Here’s the part where you thank the people who are supporting you. Who would you like to give a shout out to?

My family has always been wonderfully supportive, especially my mom and my brother, and I would be remiss if I didn't thank the writing friends I have met online who have helped me grow, both as a writer and in many other ways. And, of course, you too, Dorothy.

Aw, you’re sweet. I’m glad we found each other. Let’s let everyone know where to find you online.

I am on Facebook, and also on Twitter @wordweaver81. I recently started a blog as well, at  http://enthusiasticallyme.blogspot.com. I intend to talk about writing, philosophy, massage, movies, books, and a lot of other things that I tend to be quite enthusiastic about. Some samples of my writing should also be up shortly.... or at least as soon as I get around to it.

Fantastic! Thank you so much for chatting with us, Charolette. Good luck with your novel, and please keep us informed of your progress in publishing!
Posted by Dorothy Dreyer at 1:05 pm
Email ThisBlogThis!Share to TwitterShare to FacebookShare to Pinterest
Labels: Charolette Heil, Hunger Games, Lycanthrope Moon, massage therapy, Mockingjay, RN, Suzanne Collins, werewolves, writing style

Okay, so when does this one hit the shelf because I would love a chance to read it...and that's coming from someone that's only reading experience with werewolves is the Twilight series. Definitely good advice for writer/authors-to-be....squeeze in time to write everyday, no matter how small. LOL on the night owl bit...same here, but alas, I DO have morning hours to keep too! *SIGH* Best of luck on your publishing dreams!

Thanks, Dorothy for introducing another future author to the masses....and thereby increasing my "watch-for" list. LOL. Happy reading! =0)

Great interview and I can't wait to read your book, it sounds fascinating.

I write and edit in chronological order too. If I think of things in a section I'm not in yet, I jot them down on a post-it note, but wait until I get there to write. Perhaps , as I get better at novel writing, I will feel comfortable skipping around, but it's hard to imagine.

Best of luck finding an agent!

This story sounds fantastic. I loved the Underworld series, am all for werewolves, and work in mental health too. So i am fascinated by your pitch and really hope it gets into print. All the best with that.
PS If you ever need someone to cast an eye over it with regards to the continuity etc of the mental health elements, then get Dorothy to point you my way.

Thanks for your comments, everyone! I look forward to seeing this one in print. *crosses fingers*

Thanks to everyone for their wonderful comments! I'll keep you all updated on my progress, and hopefully someday let you know when it's about to hit bookstores!