Happy Monday, everyone! Today we're talking with a very interesting aspiring writer by the name of Jordan.

Welcome, Jordan. Tell us a little bit about yourself. 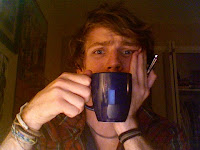 Ah, let's see. My name is JM (or Jordan, if you prefer), and my last name is Tohline (Tuh-lean). I've been writing for ten years. That's pretty much what I do. I write a lot. I read a lot.


It's funny, that very first time you pick up a pen or sit down at a computer and decide you're "going to write something," you don't realize how far that one decision will take you. Kind of exhilarating, no? Uh...yeah, of course, you also don't realize how rocky the road really is. You reach some scenic overlooks from time to time - places where you can stop and enjoy the view and appreciate your journey before kicking back into gear - but mostly it's a lot of work, a lot of effort, a lot of moving forward. I think part of becoming a "successful writer" is learning to appreciate all the steps necessary to get to where you want to be.


Maybe that's what I'll start telling people when they ask about me: "I'm learning to appreciate all the necessary steps." That might not make sense in most contexts, huh? Well...Oh well.

Sounds good. It makes sense to us fellow writers. What is the name and genre of your manuscript?


Of course, others would categorize it as a pure and utter waste of time. This is a good thing.


My goal right now (as I'm having to make some final adjustments to the manuscript) is to eliminate the middle ground who would read this manuscript and feel entirely lukewarm. I feel like, right now, there's probably 20% of readers who would love this story, 20% who would hate it, and a middle 60% who would finish reading the book and would simply move on with their life. The goal is to get that "lukewarm middle" down to about 20%, with 40% on either side feeling passionately one way or the other.

Reasonable goals. Here’s the part where you pitch it. What’s your story about?

The Great Lenore is the story of Lenore Montana, whose plane from London to Boston crashed into the Atlantic, killing every person on board.


She had left her flight just before it took off, and now she was dead on paper. And she had a chance to start over.

Wow, sounds intriguing. I'm sure many people have thought about spying on their own funerals. How did the idea of the story come to you?

Who knows how ideas come. Right?


It was funny, though - I was about halfway through the first draft of this manuscript when my dad told me about an article he had seen: A husband and wife, who had been presumed dead, were found living their dream life down in South America. My dad said, "There's a story in there somewhere, don't you think?" Uh, yeah, I told him - in fact, that's pretty much the story I'm working on right now.


It's cool, though - it's a cool concept - because it's something most people would love to explore. Attend your own funeral; start a new life; make your new life absolutely whatever you want it to be.

I understand you're between agents. Is this a difficult transition to make?

Yeah, last summer I landed a really great agent who was entirely enthusiastic about my work. She and I tweaked the manuscript a bit, and then she subbed a couple editors at major publishing houses.


Both editors had some really good things to say, but ultimately they both passed. Okay, no big deal. My agent and I made a couple more changes, and we were ready to go out to editors again. And then. She sort of. Disappeared.


After several months of disjointed correspondence, she finally apologized and let me know she was having to pull back on much of her agenting work due to some personal issues. And thus: I became an agent orphan.


About a month ago I started querying agents again, and since then I've had 15 agents request the partial or the full. But one thing you learn through this process is: This business, truly and honestly, is entirely subjective. It's also a lot of waiting. The only thing you can do in the meantime is: Keep writing. Keep writing.

You're so write ... I mean right. ; ) Do you have a critique group/partner or beta readers, or do you self-edit?

One thing that scares me is: Groupthink. Groupthink always puts one in danger of doing the same thing that everyone else is doing - and since I believe that doing something *unique* and *different* should be a writer's ultimate goal, I've always avoided writer's groups and the like.


Of course (or rather, "Of course #1"), every writer is different. I know a brilliant writer up in New York who joined the MFA program at Goddard College, and it was the best thing he had ever done for his writing career - being around other writers, getting their input, feeding off their passion. And he is one of the most unique writers I know. I think there is a balance, and everyone needs to find it.


Of course and also ("Of Course #2"), no writer is infallible. Every writer needs something/someone(s) to read their early drafts and be brutally honest with them. Someone who takes no prisoners, and who (optimally) revels in hurting your feelings.

Very good points. So, what’s the hardest part of writing for you?

The hardest part of writing, for me, is remembering that a first draft is only a first draft. I'm a perfectionist, so it's sometimes difficult for me to say, "Hey, this is the first draft. Get this story down, and stop obsessing over imperfections. Just fly! Just write. You can adjust it all later."

I struggle with that too. I think I'm getting better at it though. Any tips you’ve learned about writing you’d like to share?

Can't get any clearer than that. Tell us who your inspirations are.

On the wall beside my writing desk, I have pictures of these people: Hemingway, Fitzgerald, Steinbeck, Vonnegut, Plath, Salinger, Joyce, Kerouac, and Thompson. These are the writers whose lives and works inspire me the most (although, are not necessarily the writers who have influenced me the most).

Let’s get to know you on a deeper level. Tell us something special about yourself. 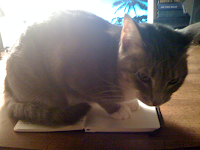 I have a cat whose name is The Old Man And The Sea. I call her Tomats for short. A couple years ago, my housemate and I were taking care of a pregnant stray, and she had her babies (Tomats among them) about 15 minutes after I finished writing the last sentence of the first draft of The Great Lenore. Ever since then, Tomats has helped me write (usually by sitting on my notebook or by playing with my pen while I write - not really much help at all, actually, but it's nice that she tries).

Sweet! Here’s the part where you thank the people who are supporting you. Who would you like to give a shout out to?

Aw, how very yin-yang! And finally, where can people find you online?

You're a busy person! Thank you so much, Jordan, for chatting with us. It's been fun.

Dorothy, thank you for this - what a great page you have here!

Thank you! And please keep us informed of your publication progress.

Lastly, Dear Reader, thank you for this - what a great face you have(?). Thanks for sharing your time with us. Hopefully I'll see you around.
Posted by Dorothy Dreyer at 6:15 pm
Email ThisBlogThis!Share to TwitterShare to FacebookShare to Pinterest
Labels: between agents, cat, funeral, JM Tohline, Jordan Tohline, manuscripts, plane crash, short stories, The Great Lenore, The Old Man and the Sea

Another great interview with an aspiring author-to-be! Sound like he is very passionate about his work, but also a bit protective...no harm in that...he loves his idea and wants to keep it as close to his dream as possible! Best of luck on your road to publication! Thanks Dorothy for letting us see the author behind another WIP on the move.

Loved the interview, Jordan displays a definite work ethic but also a certain irreverence for his work. That is a nice balance. So often writers get wrapped up in the importance of the written word, theirs and others, that they forget to have fun with their thoughts, ideas and lives. Thanks for sharing this great interview. Ciao!

Great interview! I read the first few pages of The Great Lenore that he has up at his website and really enjoyed it. I don't think he'll have much trouble finding a publisher for it.

Very good! It's interesting to listen to or read comments from people about their own work. Since reading is so subjective, and bound by the hermeneutical perspective, I'd much rather hear or read what the author has to say, than what other people have to say about it. Thanks for the opportunity.