Welcome, Jim. Tell us a little bit about yourself. 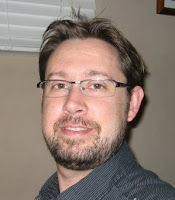 I was born on the little island of Guernsey in the Channel Islands (British Isles). I moved to Utah in 2005 after meeting my beautiful wife Jen. Since then we have spent the last five years based in the small quiet town of Bountiful. For my "real job" I work at the University of Utah as a Systems Administrator for the College of Engineering. I am also back in school part time at the UofU working on my second degree (going from Electronic Engineering to Journalism).

Bountiful is such an interesting name for a town. There’s a story-starter right there! Speaking of stories, tell us what you’re working on right now.

I have a few projects going on at the moment. My current focus is on my new project (possible series) called "Dead Beat". It's a Sci-Fi cop series set in the year 2052. I am also working on a novel called "Maidens Song" which is my first attempt at a magical realism story.

What is Dead Beat about?

The year is 2052. It has been 10 years since the signing of the All Nations treaty and the world exists in relative peace. That is until the first confirmed Ghost is filmed and broadcast across the globe. At first the world is overjoyed at the chance to see their departed loved ones again. Then the bodies start to turn up. Nothing too out of the ordinary for the area and nothing too suspicious at first. Until the murder of Professor Daryn Freeman, a Quantum Physicist at the Numar Institute. Detective John Ellis is called in to investigate, not knowing that this case will send him headlong into a fight for the survival of the human race. He is not in the slightest bit superstitious, has no time for religion and absolutely does not believe in ghosts. Little does he realize that the case he has just been assigned will take his beliefs to their limits and propel him into a battle for the very survival of the human race.

Sounds really interesting and maybe a little spooky. I like! So how did the idea of the story come to you?

My ideas come to me at the most inopportune times normally. This one came from a rather vivid dream I had....at around 3:30 in the morning. This is why I strongly advocate always having a pen and paper by the bedside.

I usually have brainstorms in the shower—guess I need to invest in some kind of waterproof writing apparatus, lol. You said this was a new project, so I’m guessing your manuscript is still a work in progress.

Yes, the project is still in its infancy. I'm currently working on characters, including the sinister Reverend Jocob Green. Normally I have a bit of an affinity with my villains (I'm British, we're always the baddies) but I'm really starting to hate this guy.

Sci Fi requires world building, which means a high word count. Do you have a word count goal, and how far along are you at this point?


I try to not to give myself overall word counts for the full story. I will, however, give myself targets during a writing session. Normally I shoot for 1000 words per hour, doesn't always happen. I should have a working draft for the first couple of chapters by the end of the week, exams and work permitting of course.

Yes, the time factor. Still, 1000 words an hour is amazing. Do you have a critique group or beta readers, or do you self-edit?

My wife is a fantastic editor, having worked with a lot of copy during her career. I do a lot of editing myself, often as I go, but it's great to have someone around with less attachment.

That’s very convenient. What’s the hardest part of writing for you?

The hardest part I find is having too many ideas. Now I know people are going to comment on that not being a problem, but when you get several ideas at the same time, all seeking to come out on top, this generally ends up in the dreaded writer’s block. It's not that I don't know what to write next, I just don't know which one.

One of the most important things I have learned is to take time away from the desk. There is this idea that, as writers, we need to be chained to the keyboard 24/7 until the story is told. The problem with that idea is that it will stop you experiencing life. And a writer that does not experience life has no stories to tell.

That’s a good point. Who are your inspirations?

My big three would be: James Herbert; Who first inspired me to write myself after reading his book "Moon". Gene Roddenberry; For daring to predict a future where mankind has completely screwed up. And my all time favorite author, H G Wells. His literary skill and incredible foresight have always been able to enchant me, no matter how often I read his stories. If you have only seen the movie adaptions of War of the Worlds then you need to get the book ASAP. There is simply no comparison.

Let’s get to know you on a deeper level. Can you name three things about yourself people may not know (or maybe they do know but they are special traits/hobbies/quirks)?


I have to say, aside from the weird fact that you can turn it that far, your foot story is adorable. All because of a girl! But enough about her, here’s the part where you thank the people who are supporting you (and not who have caused you physical impairments). Who would you like to give a shout out to?

My wonderful and ever supportive wife who puts up with my sudden bouts of inspiration in the early hours of the morning. My friend and fellow writer Cherie, who got me back into the writing world after persuading me to do NaNoWrimo for the first time. And of course a very special shout out to my no 1 Twitter girl @craftycmc.

You can find me ranting and raving about my tortured life as a writer over on my blog; The Writers Stall: www.writersstall.blogspot.com. Or follow me on twitter @writingstorm

Thank you so much for chatting with us, Jim.

I've really enjoyed it, thank you for letting me do the interview. It's been a pleasure.

Good luck with your books, and keep us informed of your progress!
Posted by Dorothy Dreyer at 9:20 am
Email ThisBlogThis!Share to TwitterShare to FacebookShare to Pinterest
Labels: Bountiful, Dead Beat, Detective, Ghost, Guernsey, Jim Angell, Sci Fi, Utah, villains, War of the Worlds

Thanks for another interesting interview and introducing us to Jim.

I almost always forget what I think about in the shower. A tip I learned that keeps me from forgetting shower brainstorms: a dry erase marker will write on the bathroom mirror just like a whiteboard & wipes off without a trace.

This is also a great way to leave notes. My wife sometimes works late and we won't have a chance to talk during the day. We've use the mirror as a place to leave reminders or just to say hi.

Another great post and early introduction to the possible star authors of tomorrow! (Great job on the site, Dorothy!)

As for Mr. Angell...your WIP certainly sounds chilling...and that's a great suggestion regarding the pen/paper by the bedside. Some of the top sellers out there now have started out as an everyday dream (or nightmare...it depends on the book type you were going for). Thanks for sharing!