Today I have the pleasure of speaking with Derek Haines. In addition to offering English proofreading and copy editing services, Derek is a writer of fiction, essays, and poetry, and has just released his new book, VANDALISM OF WORDS.

Welcome, Derek. Tell us a bit about yourself. 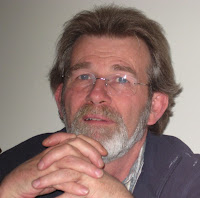 Although officially born in the middle of last century in outback Australia, I was for some odd reason, recreated some moons ago at the age of 42, and then just started writing books, novels, poetry, songs and anything else one can do with a pencil and piece of paper. Everything is a bit of a blur before that. A strange blueish blur in fact. Probably something to to with the Australian bush and eucalyptus gases. Things are much clearer now that I live in Switzerland.


I seem to be attracted to the antithesis of anything. The divergent, contrary, antipode or just plain opposite. Agreeing seems to be one of my very weak points. On the other hand, I am a very good cook, which hardly anyone believes. Additionally, I don't agree with nobody that double negatives are passé. I didn't used to teach English for nothing, you know.


As for my writing style, I just try to put words in, as Douglas Adams once said, 'a clever order'. Not that I always achieve this feat. Probably because my creative juices are handicapped by trying to remember how to spell. I always get stuck on words like restar... no.... restaura... no restaure..... well you know, somewhere you go to eat food. My clever order theory is often tested by the fact that my impatience always races ahead of my brain and fingers. Causes a bit of calamity.

Since I was recreated, reincarnated, remodelled, rehashed and recycled at the age of 42. I have to credit a rather tumultuous period in my life at that time for this. I also blame Douglas Adams again. Once he died, I think I saw a gap in the market. But alas after all this time, I haven’t managed to be even as good as one of his toe nail clippings. 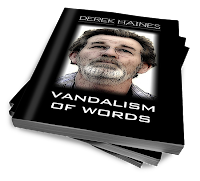 Tell us about your new book.

My new book Vandalism of Words is oddly made up of very old chunks of scribble. I think I tired myself out when I wrote my previous book Milo Moon. So I decided to bang together about 140 extra short pieces of my old tirades, opinions, biases, life advice and the odd recipe to create a new book. As I didn’t sit down for months and slave over every word, I decided to reduce the price of this book to free or really very, very cheap and release it as an e-book.

What an interesting concept. How did the idea come to you?

I was looking at my Macbook and noticed this file called ‘OLD STUFF’. Once I opened it and dug around for a while, I tossed up between deleting it or archiving it. I decided on archiving everything into one document to save space, and by the time I had finished I noticed there were about 55,000 words. It seemed about the right number of words for a modest book, so I hit the publish button and thought to myself, “Oh dear. What have you done?”

I pride myself on my knowledge of grammar, my years as an English teacher and my ability to put red pen marks all the way through any document. As I used to terrorise students with the ‘red pen of death’, I now do the same to myself. Then I ask a few trusted ex-English teaching colleagues to do the same again with their own red pen.

LOL. Let’s get to know you on a deeper level. What do you absolutely have to have nearby when writing?

I believe I am a stereotypical writer in this regard. My Macbook, caffeine, nicotine, occasional alcoholic binges and a packet of biscuits.

I would like to be able to type with all of my fingers. I have managed to work up to nearly three, but even with this modicum of improvement it still takes ages to write a book.

I have faith you will be able to master the technique at some point. ;)

Quick writing test! Use the following words in a sentence: underwater, stars, and mountain lion.

After having subdued the ferocious mountain lion with the threat of my trusty Swiss Army knife, I quickly grabbed him by the scuff of the neck and shoved his head into a bucket of water and held him underwater until he saw stars. After three near death experiences, he finally gave in to my torrid questioning and told me that his name was George.

My wife should be given a bravery medal or at least a statue in her honour. How she has tolerated me for so long is completely beyond me. She is my greatest supporter and harshest critic. She also makes the best fondue in the whole of Switzerland.

Mmm, fondue! And finally, where can people find you online?

Thank you so much for chatting with us, Derek. I wish you much success with your books!

Derek's other works can be found and purchased on his website.
Posted by Dorothy Dreyer at 11:46 am
Email ThisBlogThis!Share to TwitterShare to FacebookShare to Pinterest
Labels: Derek Haines, proofreading, Vandalism of Words

What a great interview, Dorothy, with one of my favorite writers who has a wonderfully powerful philosophy about writing and life in general. Happy Monday

Thanks, Laura! It's so interesting to learn about writers of different genres. I hope everyone enjoys the interviews. :)