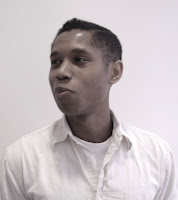 Today we're chatting with author Philip Ejike, who is represented by Foladé Bell at Serendipity Literary Agency of Brooklyn. Philip's novel IF LEAVES WERE BLUE is currently on submission to editors.

Filled with a various mixture of interesting characters from a controlling best friend to a fantastical god-like being, IF LEAVES WERE BLUE takes the reader on a magical journey of identity through the eyes of a teenage girl who believes herself to be the ideal human.

Welcome, Philip. Tell us a bit about yourself.

I've used this line before, but I think it sums me up nicely: “My opinions, philosophies and curiosity about life exist most honestly in the forms of fictional characters.” Aside from that I'm twenty-five and from Pennsylvania.

Since I was seven. I began filling notebooks with three-panel comic adventures about a Mussaurus named Sam. A full-length novel followed shortly after, when I was eleven, and has long-since been justly forgotten.

How did the idea of IF LEAVES WERE BLUE come to you?

The story started with the idea of purity; whether a universal definition exists, or, more accurately, can exist. I then decided to force it into existence through the eyes and mind of my protagonist, who is very certain of what purity is, and that she possesses it, and is furthermore unable to acknowledge that there are other perceptions and opinions beside her own.

What do you feel is the importance of such a tale?

If anything, it reinforces what we already know about each other as people: we're each and every one a universe of layers. Maybe we're not endlessly deep, but a significant amount of time spent with any person (including yourself) is bound to reveal some surprises. 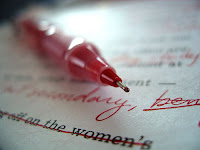 I self-edit. And extensively. I do, however, have two people who are usually always up for reading my stories. The first person is my brother, who is never hesitant to tell me if something is garbage. The second is a dear friend who is a fantastic young composer, and is inspired by my work. I'm inspired by him as well, so we've a tidy symbiotic friendship between us.

Editing. But it's also the most necessary part, isn't it. It seems that every bit of the fictional world is eager to breathe, to let the real world know that it exists and has character and function, but in actuality this is just the vanity of the writer speaking. 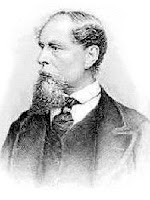 A group of names that are constantly vanishing and reappearing and shuffling in order of importance. But I can for certain name Nabokov as one inspiration—to him language was putty, and you can tell he had such a grand time playing with it. And then there's Yukio Mishima for his psychological explorations, Dostoevsky for his philosophical ones; Dickens for all of those wonderful characters and incubatory prose...and Alan Moore, who is a genuine champion of the imagination.

Nothing in particular. What I need, however, is a blue pen and a notebook.

Hmm, well, I suppose at the moment it would be in vogue to say something about having the ability to flit through other people's dreams, what with Inception still being in theatres, but my ideal super power is far more simple. I'd want the ability to age myself—temporarily—so people will stop asking me about which high school I attend. It happens much too much for comfort.

Quick writing test! Use the following words in a sentence: sorceress, umbrella, and alligator.

An alligator with an umbrella is most likely a sorceress.

And there we have it, short and sweet.

Indeed! Here’s the part where you thank the people who are supporting you. Lets hear your shout outs.

My parents, certainly. And my terrific agent.

Thank you so much for chatting with us, Philip. I wish you much success with your novel. Be sure to let us know when it's out.
Posted by Dorothy Dreyer at 7:15 pm
Email ThisBlogThis!Share to TwitterShare to FacebookShare to Pinterest
Labels: If Leaves Were Blue, Philip Ejike, Serendipity Literary, urban fantasy

Love the title, the book sounds amazing and best to Philip! I'll read this one when it comes out. Great interview!

Great interview! Sounds like a great read. I absolutely love this, "we're each and every one a universe of layers." So true.

Great job to both of you ;o)

Always curious to see how the main character turns out when the author and them are of the opposite sex. Very interesting....and it looks like "old school" works best for this writer when set to task. Thanks for sharing a bit about yourself and your work! Thanks, Dorothy for another great interview.... ^_^

Many thanks for the comments everybody.

If anybody has any further questions, be sure to contact me at porgys[underscore]dress[at]msn[dot]com.

Very useful information for people, I think this is what everyone needs.