I suspect everyone is over at WriteOnCon. I certainly am, and I didn't think I would be this nervous about an online conference, but that's exactly how I feel. All those eyes! Not just the professionals, but fellow aspiring writers as well. I'm all a-jitter! 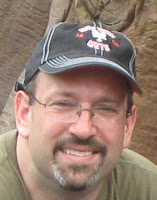 Speaking of aspiring writers, I've got a great one to chat with today. I saw a small sample of his work on a Secret Agent contest and immediately liked his work. Today's spotlight falls on Jay Eckert.

Welcome, Jay. It's great to have you here. Tell us, how long have you been writing?

I have to answer this as if I've had two lives, which from a writing perspective I have. While in college, I took a lot of theater courses and spent quite a bit of time writing a couple of plays which are, in retrospect, incredibly awful despite the good grades. Then I graduated, started working, got married, had kids. Life happened, but over the years I toyed with the idea of writing again. It was about seven years ago I began to write in earnest again.

What is the name and genre of the manuscript you're currently pitching?

What’s your story about? 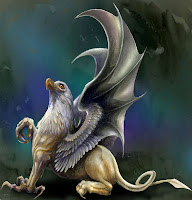 Zydeco Cashcan is a former Griffin adjusting to life as a human teenager. After a run-in with the deputy mayor’s security minions, he discovers a plot to capture fellow ex-mythological creatures and expel them to a barren world filled with ravenous hellions. Before long, the former mythic beings Zydeco cares for start disappearing at the hands of the politician’s henchmen.


The deputy mayor demands that Zydeco turn in the leader of their local support group for recovering mythological creatures, or those he loves the most will be exiled as Chimera-Chow. Zydeco despises threats, so he decides to mount a rescue attempt to save his friends rather than betray the support group leader, whose help will be critical to the mission’s success. There’s just one problem—Zydeco hasn’t the slightest clue where the guy is hiding.

What a cool concept! How did the idea of the story come to you?

I decided on the genre first - I write YA, and I wanted to try my hand at an urban fantasy. I went into my "what if" mode and eventually came up with the question, "What if mythological creatures were living in a city among the human folk?" Of course there are about a billion urban fantasies where mythological creatures live in a city among human folk. I set my imagination back to coming up with something a bit unique.

So then I thought, what if these these creatures had become human after being exiled from mythical world. And what if they retained some of their mythological capabilities? For example, Zydeco is a Griffin -- half lion, half eagle. He remains incredibly strong and fearless, and when he sets his mind to it, can retain the elevated senses of those creatures. Finally, it occurred to me that if you had a bunch of former mythological creatures running around a city, they might not be happy and have trouble adjusting to human life. Hence, the support group for recovering mythological creatures.

Sounds great. I'd love to read it. What else are you working on? 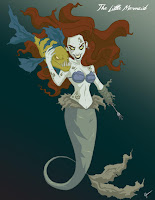 I'm mostly focused on submitting Urban Mythos around, but I've toying with the idea of turning it into a series of sorts. I've got a series of notes in case I decide to go for it. On the flip side, I'm in "what if" mode for my next book, which will likely be dystopian, but might be post-apocalyptic. Some of the ideas are a bit deranged, anywhere from zombie mermaids to something conceptually similar to Soylent Green.

LOL, zombie mermaids. Kind of reminds me of the merfolk in the lagoon at Hogwarts. So, do you have a critique group/partner or beta readers, or do you self-edit?

Yes and yes! I subscribe to writing.com and belong to the YA forum there. There are a great bunch of people who write a number of YA genres and we critique chapters as we write -- good, long detailed critiques on everything from plot, voice, character, setting to fairly detailed line-by-line notes. We've got people from all around the world. I consider them my friends, and I don't know what I'd do without them.


But, yes, I do self-edit as well. I've got a whole revision process I documented on my blog.

You mean apart from allocating time? I guess it's writing scenes in which there is very little dialog. I'm a verbal kind of guy. My fingers get twisted up on the keyboard and I over think scenes where nobody talks. It takes me far longer to get those scenes written.

1. Coffee, preferably a Starbucks Cafe Americano along with a few cookies.
2. Music to suit the mood of the day. The selection is wide ranging and ever changing.
3. My sasquatch notebook with all my notes.

Quick writing test! Use the following words in a sentence: baby blanket, missile, and jury duty.

Bobo preferred jury duty to his day job as a circus clown, where he spent countless hours cleaning up after the baby elephants who blanketed the arena floor with baby missiles.

Oh, oh, oh. The family first. I'd like to thank Rona, Scott, and Rachel for putting up with me effectively disappearing into my imagination after dinner most nights to write. Big shout-out to my buds from writing.com and to all the other wonderful writers, editors and agents - my tweeple, my blogmates. You've each helped me along my way. And thank YOU, Dorothy for indulging me. :-)

Aw, that's sweet. Thank you. And finally, where can people find you online?

You can check out my blog at - http://jayeckert.blogspot.com

Jay, thank so much for letting us get to know you and your work. I wish you much success on your publishing journey!
Posted by Dorothy Dreyer at 2:46 pm
Email ThisBlogThis!Share to TwitterShare to FacebookShare to Pinterest
Labels: Jay Eckert, Mythology, Urban Mythos, YA Urban Fantasy

Great interview, Dorothy and Jay. I enjoyed reading it.

Jay, I'd better finish reading your book on the forum before the rest of the world discovers it. It's only a matter of time for it to become a bestseller, to my opinion. You're a talented writer!

Geeze, and I didn't think I could learn more about you, Jay. Cookies and coffee! A man after my own heart.

What an absolutely delightful interview, Dorothy. Those questions you posed to Jay were fantastic! Thanks so much, because I learned more about him. He's such a talented writer and I'm hoping to see his name in lights soon.

Jay!!! How wonderful to see you in the spotlight :) and we go a mention too. What an honour. Great interview, my friend.

And Dorothy, I totally love the writing test! haha!! What a fantastic idea. Jay, you did good :)

This was fantastic! Jay's book sounds awesome! I like how you came up with the idea, and how you first decided the genre. When I first started writing I envisioned myself as a romance/chick lit adult writer, but where did I end up? YA fantasy and love it!

A) Support group for mythological creatures, I love it!!

B) HEE, love the last sentence you came up with for those words. (Way to not cop out like I did; I wrote a whole mini-scene!)

Great interview, thanks to you both, Jay and Dorothy!

Thanks, everybody, and for Dorothy especially!

Thank you, Jay, for giving us the opportunity to get to know you.

And thanks to everyone for the great comments! :)

What a great interview. Griffins and zombie mermaids sound so unique. I'm sure the "aspiring" label will turn into "published."