Hot enough for you? Let's try to chill out a bit with a cool interview with author Bertram Gibbs.

Welcome, Bertram. Tell us a bit about yourself.

I grew up in a semi-theatrical family. My grandmother was a former chorus girl, my grandfather a former jazz drummer, and my mother (aka ‘Ma’) - who had crippling stage fright - went to every movie and Broadway show during the 40s, 50s, 60, 70s and 80s. She taught me film and theater history at an early age and have a semi-photographical memory when it comes to comic books, television programs, Broadway shows and (of course) movies. Because of her (gotta put the blame somewhere) I collect movies and have over 2.500 DVDs/VHS tapes. I also have about 700 CDs. My taste in music runs from classical (European and modern American composers), to jazz, to Big Band, to Doo Wop, to Broadway scores, to early rock and roll, to funk, to progressive rock.


Between the age of 15 and 25 I was an actor. I did a few off-Broadway shows, made an appearance on a PBS television production, performed with the Metropolitan Opera, performed for the Mayor of New York at Gracie Mansion, performed for the Chinese government at the Brooklyn Academy of Music, and was an extra in the 1976 film ‘King Kong’ (I was under the fallen ape’s butt, so you won’t see me on screen). After finding my theatrical career stagnant, I worked in credit and collections for 3M Company, Fuji Photo Film USA, worked for the Metropolitan Museum of Art as a greeter and coordinated the Degas and O’Keefe exhibitions, was part of the Army Reserves for several years (where, much to the dismay of the military, it was found that there were no regulations against biting sarcasm), and presently back working in credit and collections (don’t look for a linear correlation – there ain’t none). But to keep myself sane (or a reasonable facsimile thereof), I write fiction.


My side interest is studying criminal psychology and forensic sciences. I have a considerable collection on serial killers, mass murderers and bizarre crimes. Add in I have deep Vincent Price-like laugh. This explains why I do not get many visitors.


I am also a single parent of a highly intelligent (and twice as deadly) 14 year old daughter. When she was younger, she was somewhat confused that Dad would sit for hours at the computer, tapping away and giggling. She got used to it and has encouraged me since she cannot physically pry me away from the machine (she has dragged the chair - with me on it - into the next room on occasion).

Quite a life you have there. How long have you been writing?

Ma always said that since I began reading and writing on my own since the age of 3, I have been trying to top the author of whatever book I was reading. Despite my years in theater, I always found the time (albeit at pre-dawn hours) to write. Unlike other authors who find a genre and write only that, I write fantasy, sci-fi, (as Harlan Ellison calls it) speculative fiction, mysteries, horror, comedy, farce, and a little comic book fan fiction. I do not like to limit myself to one thing.

Tell us about REFLECTION FROM THE ABYSS. What’s the story about?

It is the story of Carlton Book. He is a freelance accountant and crunches the numbers for several clients. He also runs his life like the spreadsheets he works on; reviewing every variable until all possibilities are considered before any action takes place. This suits him well in his ‘second job’; a paid assassin. He removes individuals the same way he deletes numbers on spreadsheets; without personal interest. He even considers his targets ‘numbers’.


When he arrives at the location of his next target, he finds the individual brutally murdered by the 3-Monkey Killer, an elusive serial killer. In his haste to leave the scene of the crime, he leaves trace evidence behind.


The 3-Monkey Killer not only knows who he is, and is sending him text messages and emails to his personal address requesting they team up. While the police are reviewing the evidence from the crime scene, Book must now find the killer before the police find him and arrest him for crimes he did not commit, and before his own crimes become known.


This is the story of the death and resurrection of a man’s soul.

I was watching a program on serial killers on the Discovery network, and what followed was an episode on assassins. Despite the fact that they share an end result, their methods and mindsets are different. As always, the ‘what if’ came to mind; this time what if an assassin is forced to deal with a serial killer, and would one feel morally superior over the other? Because they are on two separate levels, would there be an understanding of the other’s methods? Because there were so many questions, I began jotting notes and the story began to write itself. My knowledge of criminology, criminal psychology and my repeated watching of episodes of Criminal Minds, CSI and assorted crime shows and documentaries helped a great deal.

Typing as fast as my mind plays the scene out. You see, because of my love of movies, my writing has a cinematic style. Because my imagination ‘sees’ my stories as films, my mind is ‘playing’ the DVD while my fingers transcribe the setting, the camera angles, the characters, the costumes, the direction, the dialog, and the special effects, if any. Sometimes my mind plays out chapters at a time and I can spend hours doing transcription. I’d love to have a USB port in my head to plug myself into my computer and sit back watching the words/actions appear on the screen.

I've had the exact same idea. Plug and play! I wish someone would invent it already. Let’s get to know you on a deeper level. What do you absolutely have to have nearby when writing?

My daughter, silence and iced water. If an idea ‘tickles’ me, I will stop what I’m typing and run it past her; not necessarily for approval, but to watch her reaction. She usually just stares at me blankly and goes back to whatever I interrupted her from. I used to have music playing, but I would become distracted and find myself stopping to listen when a certain track (or segment of a song) played. The water is to keep me hydrated (and awake if I knock the glass in my lap). 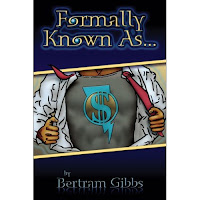 BWAH-HAH-HA! Super-speed. It would help getting these images I have constantly running through my head on paper. Of course, I would have to have a room full of replacement keyboards (I have a tendency of pounding on the keys – a throwback to my days of using a typewriter).

Yikes! I'll be sure to stay clear of you when you're typing then.

Quick writing test! Use the following words in a sentence: comic books, time machine, and equilibrium.

Using the instructions I found in the back of a comic book, I adjusted the equilibrium of the flux capacitor and found the time machine actually worked! Now I can go back in time, buy early shares of AT&T, 3M Company, Lucasfilms, Microsoft, and several copies of the first issues of Batman and Superman, go back home and write for a living! And get my kid a pizza.

Hehehe. Here’s the part where you thank the people who are supporting you. Let's hear your shout outs.

To Ma; she had always been my closest friend and harshest critic. She will always be the cricket in my ear telling me I should write that section over.


To my daughter; she is the light in my eyes and the love in my heart. I write not only for myself, but for her to be proud of her Dad.


To Jeremy; we’ve known each other for so long, and still talk to each other. Thank you for joining me on the ride of a lifetime.


To the many of the mugs who are generous enough to call me their friend, who have read my work and know I have something special to share. Thank you for being there during my ‘Brightest Days’ and ‘Blackest Nights’.

You can go to the Christopher Matthews Publishing site, as well as Amazon, Borders, and Barnes & Noble. It’s available in paperback, as well as for eBooks.

Thank you so much for chatting with us, Bertram. Good luck with your books, and you know, maybe go easy on the keyboard. ;)
Posted by Dorothy Dreyer at 7:05 am
Email ThisBlogThis!Share to TwitterShare to FacebookShare to Pinterest
Labels: Bertram Gibbs, Christopher Matthews Publishing, crime fiction, Reflection from the Abyss