Happy Monday, everyone! Wait, what? Monday's aren't happy? Well, let's change that with a happy interview with a fabulous up and coming writer. Say hello to Kimberly Krey. 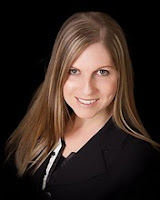 Hi, Kimberly! Tell us a bit about yourself.

I'm a happily married mother of four with a passion for family, food and the written word.

I've been writing for just over two and a half years.

Tell us about EVIE'S KNIGHT. What’s the story about?

Evie's Knight is a YA Urban Fantasy. When seventeen-year-old Evie falls in love with Calvin Knight, their love provokes a psychotic woman from beyond the grave who wants Evie dead. The same demon who has haunted the Knight men for four generations.

That's a quick summary. An extended blurb on Evie's Knight can be found on my website (link below).

Sounds cool. How did the idea of the story come to you?

The idea definitely came to me in layers. I knew Evie and Calvin pretty well, and I knew that Calvin was tormented somehow, but it took a while to discover my antagonist, who, in the end, became known as The Raven-haired Ghost.

Awesome, sounds scary. Do you have a critique group/partner or beta readers, or do you self-edit?

Both. Well, all of the above. I wrote the book, shelved it for a summer (and started writing another book because writing had become such a part of me I couldn't live without it) and then went over it again. During this time I revised and edited until I felt it was ready for my beta readers (I had about a dozen ready to read the MS). Much later I found my amazing critique group which actually consists of just three women (including myself) and had them go through the MS as well. But I really like to self edit first and get my work to a certain point before I get any outside critiques/feedback on it.

You know, I really just love the whole process. I do. The creative stage is the funnest for me. When the characters are revealing themselves to me as I go. I love being surprised by some of the things they do. And the editing process, though sometimes it seems to drag on forever, can actually be fun because it's where the manuscript really starts to shine. I honestly enjoy it all. Finding time is a bit of a trick, though. And querying is an entirely different story.

Hmm. That's a good question. I really think I almost have it all as long as I have my laptop. It's got all my music on there which, depending on what I'm writing and what stage I'm at can really feed my muse. Okay, I actually have something. Two things. I always have to have my Altoids Mini Mints (love them!), and my Soft Lips chap stick. I go nowhere without them. Not camping, boating, or even a trip to the grocery store. Those two items are with me always, and that includes while I'm writing.

That's a hard one because there are so many awesome powers out there that I know could be useful in like, saving lives and everything. But my most pressing (and sort of selfish) desire would be to fly, of course. Don't we all dream about that?

It does seem to be a popular answer.

Quick writing test! Use the following words in a sentence: session, revitalize, and odious.

Okay, I'll write one like it's in the middle of a novel, how's that?

Stuck in therapy again. Mom says the sessions should revitalize me, leave me feeling light and ready to face the day, but I dread the odious task the way she dreads hearing what Dr. Sims has to say about me.

Alright, major shout out to my hubby and kids for putting up with my crazy writing habits. To my sister-in-law and mother for being the first ones to go over Evie's Knight (pre beta readers), and my dad and mother-in-law for their continued support. Also to the awesome women in my critique group, Marilyn Yarbrough and Jamie Thompson. A big shout out goes to my fellow bloggers and followers, and an extra big one to you for hosting this interview! Thank you for spotlighting me on your awesome blog; it's such a great honor!

You're welcome! And finally, where can people find you online?

Thanks so much for chatting with us, Kimberly. I wish you lots of success with Evie's Knight and all your writing projects!
Posted by Dorothy Dreyer at 6:33 am
Email ThisBlogThis!Share to TwitterShare to FacebookShare to Pinterest
Labels: Evie's Knight, Ghost stories, Kimberly Krey, YA Urban Fantasy

Great post! I already know how fantastic Kim is, but it's fun to hear more about her! Love your blog :)

It was fun to learn more about Kimberly like this :)

Thanks, guys! And a big thanks to you, Dorothy!

A very nice interview. Glad to have the chance to learn a little more about Kimberly.

This is a great interview. What a great format. I cant wait to read more.

This is a very nice sample,tips and guidelines on how to write a interview letter
.Thanks for sharing it with us.I'm pretty sure a lot of people out there will find this blog of yours very helpful.

Great interview. I can't wait for Kim's novel to be published so I can get a copy.

"The Raven-haired ghost" --love that! Sounds like a great book!

Thanks, all! I appreciate the kinds words!