Don't you love return guests? So do I! That's why I'm glad to announce that author Chris Stevenson is back to chat with us. He's got a new book coming out, so let's learn more about it.


Welcome back, Chris! Tell us about THE WOLFEN STRAIN. What’s the story about? 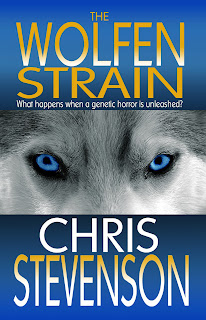 Tagline/Hook:
Seth Anson, a lovelorn forest ranger, never thought that he would shoot the first eligible woman he met after his divorce. Nor did he think that he would fall in love with her after nursing her back to health. But he certainly isn’t prepared to find out that she is the result of a DNA cloning experiment gone horribly wrong and, is in fact, a hybrid wolf/human. To complicate matters, she also has no idea of her true identity.

Seth finds out early on that Melina Salinger is a handful. He mistakenly believes that she suffers from hypertrichosis (werewolf syndrome), and that she has escaped from a care facility. She confesses later that she has been confined in an underground missile silo by her geneticist father, Davis Salinger, and the only thing she knows about everyday life has been gleaned from video movies and television. Now she wants to be a normal girl.
It isn’t easy trying to indoctrinate a woman into society who pants, growls and thinks that Emerald City is a real place somewhere over the rainbow. The ritual shavings and skin maintenance are enough to drive him crazy. Moreover, when she goes into a feverish estrus cycle, sex and passion seem like blunt-force trauma.

Just when Seth thinks he has things under control, Melina becomes deathly ill. Her mysterious father shows up to offer aid, and then shockingly confesses that she carries ancient wolf DNA. After recovering, Melina, shamed and traumatized by this knowledge, becomes suicidal and runs away. Only her father left out the part about her other litter mate – a grotesque monster, Romulus, has just broken out of the silo compound. Romulus is bent on finding her for the purpose of mating and will kill anyone who gets in his way.

Seth has to use his skills as a ranger to find Melina in the Wyoming wilderness. He has Romulus out in front of him, the National Guard, the sheriff’s office, a maniac cryptozoologist, and every monster-hunting vigilante in the state hot on his heels. He has to decide if it is guilt that drives him on his quest to find Melina, or that somehow, this wild and beautiful female was destined to be the love of his life.

The Wolfen Strain examines the lurid morality issues that are dealt with in The Island of Doctor Moreau. Yet the predominant theme is that of forbidden love, found in Beauty and the Beast, only with the gender rolls reversed.

When my second agent went to the BEA a few years back, he did so with the express purpose of asking each editor he met what (exactly) they were looking for as pertains to the next big thing. He made a lot of face to face contact and scribbled voluminous notes. One publisher, the small black and white bird from the Antarctic, replied that they would love to see a new spin on a werewolf tale. My agent queried me and asked if I was up to the task. I said I was, and that I had conditions. The conditions were, that I would not follow the general trope—howlings, full moon, Lycanthropy and silver bullets. If they wanted a unique concept, I would really give it to them. I thought about what Michael Crichton had done with Jurassic Park, and thought about the current Thylacine Project, and how ancient DNA was being processed to resurrect extinct, hybrid animals. So I devised a way to find and reproduce the genome in an ice dire wolf. But this dire wolf was a man-eater. When the scientist performs the experiment, his protocol serum somehow replicates the human gene, which gives birth to a human/wolf hybrid. In addition, two other litter mates are spawned: a true ice age dire wolf and a grotesque monster. Of course, with this three-pack combination, all hell breaks lose.

Without giving too much away, what's your favorite part of the book?

Melina Salinger is just the strangest female creature that Seth Anson has ever seen. He has a lot of trouble teaching her about ladylike behavior and what is expected of a woman in today's society. The funniest part is when she enters an estrus cycle and chases Seth around the tower room, demanding a mating ritual. He more or less gets raped when she overpowers him. It's an awkward, but memorable scene.

Best time of day to write?

I try to get in a major chunk of writing during the morning hours. That's when I have most of my energy. Then I have to do my farm chores, which might take about three to four hours. I'll come back to the house, shower, and attempt to pull another stint at the keyboard. I steal as much time as I can during the day, and have been known to writer into the late, wee hours of the night and early morning.

Who are your top three favorite characters from books by other authors?

Ethan Fortune, in Alan Dean Foster's book, Icerigger, is a favorite character of mine. He's stranded on an ice world with a race of furry giants, and just can't seem to get with the program, without embarrassing himself or breaking some kind of cultural law. Skua September (from the same book), is the opposite of Ethan—he's brash, reckless and a fighter, who doesn't really care who's cultural laws he steps on. Philo Skinner, from the book, Black Marble, is an unforgettable rogue who schemes his way through every hour of the day, taking advantage of anyone who crosses his path. He's disgusting, smokes three packs of cigarettes a day, and gags so frequently that he cannot speak at times. He cries often, and wonders why life has dealt him such a terrible lot.

Where can we find your new book online?

As of this writing, The Wolfen Strain is not up on Amazon yet. But it will be this month, after June 26th. You have only to Google it in the Kindle section. A trade paperback will be released two months after the ebook release. You can find it also from the publisher's website here:

Thanks for updating us, Chris. Good luck with your new book!
Posted by Dorothy Dreyer at 4:56 pm
Email ThisBlogThis!Share to TwitterShare to FacebookShare to Pinterest
Labels: Chris Stevenson, Lachesis Publishing, The Wolfen Strain, werewolves

I forgot that it was listed at BookStrand as well:

It just hit Amazon Kindle minutes ago. The link is here: