Today we're talking with author Shane KP O'Neill about his book BOUND BY BLOOD, the first book in The Vampire Chronicles.

Welcome, Shane! Tell us a bit about yourself. 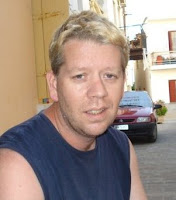 My name is Shane O’Neill and I’m the writer of a new series called The Dracula Chronicles. It’s a project many years in the making that has been meticulously brought together. Outside of writing, I’m an Irishman living in Norway with my family.

In one form or another I’ve been writing since childhood. I began this project about 20 years ago, but have worked at it seriously for the last 9 years.

Tell us about THE DRACULA CHRONICLES. Can you elaborate on what the
story is about? 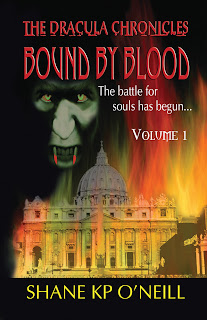 The Dracula Chronicles are an epic journey through the ages where the forces of Light and Darkness struggle for supremacy until the Second Great War, as foretold in the Book of Revelations. This bitter feud began after the creation of mankind. Lucifer’s jealousy leads to the First Great War of the angels. Hundreds of thousands of years on the feud simmers beneath the surface. It plots the course of history as we know it today. Both sides manipulate the major players through the centuries to seek an advantage over the other.

On a cold night in December 1431 in Sighisoara an old gypsy woman delivers a prophecy to the great Vlad Dracul. She tells him he is about to sire two sons, one an angel and the other a devil. He returns to his fortress just as his wife bears him a son, whom he names Vlad. In the very same moment across the country on the border between Transylvania and Hungary a gypsy girl gives birth to another son, Andrei. The die is cast. The twin souls are born. The young Vlad Dracula becomes the instrument of the forces of Darkness. To balance this, the baby Andrei is blessed by the angels and bestowed with awesome powers. These chronicles are their story.

That is the overview essentially, but people who read the books will see there is so much more to the series.

I have always wanted to write a book or series about Dracula, but I wanted to write about the real Dracula as well as the mythical one. To achieve this successfully I knew I would have to do something new and different to what has gone before. The first book I wrote, Reckoning Day, is now #6 in the series. Originally, in that story, I would go back in time after every third chapter to the 15th Century and Dracula the vampire. Then I decided to include the real historical Dracula in my concept and the series evolved from there as more book became necessary to fit in with my concept.

I have always worked entirely alone, but I have passed it to people to read yes who are qualified to deliver a relevant critique.

I haven’t heard that term before, but I can gauge your meaning. Because my books work chronologically I usually write 3 different segments of each book concurrently, so I generally write as the words come to me. That would make me the latter then I guess.

For me it is the editing process, of going over it all again and again. I am my own worst critic and have cut lots of the story away to make it as concise as possible. Even in doing this, Bound By Blood was still over 261,000 words so I had to split it into 2 volumes. Now that it is finished and I have put it to bed, I am fully able to appreciate what I have written.

The ability to read into the mind of any woman. That would be just perfect.

I am not sure really. In the research for Book 6 I researched and studied a lot of dark and Satanic rituals. Much of that was weird and scary.

Quick writing test! Use the following words in a sentence: vampire, vacuum, and velocity.

Hmmm. The velocity with which the vampire exited the small room left a vacuum in the space behind it.

There are too many to mention, but I would like to thank everyone who has supported and believed in me. To my good friends who have featured me on their blogs and to the good people who re-tweet my tweets on Twitter.

Posted by Dorothy Dreyer at 6:24 am
Email ThisBlogThis!Share to TwitterShare to FacebookShare to Pinterest
Labels: Bound by Blood, Dracula Chronicles, Shane KP O'Neill