Today marks the launch of CHOKE, the second book in the BREATHLESS novelette series by SR Johannes. First let's take a look at the first book in the series, SUFFOCATE.

Suffocate #1 in The Breathless Novelette series

Suffocate is the first novelette in THE BREATHLESS series. It is a 15,000 word young adult thriller that combines the dystopic and science fiction genres.For centuries, the world outside the Biome has been unlivable. Today, marks the first time anyone will attempt to leave the suffocating ecosphere. Eria is not worried because her scientist father has successfully tested the new Bio-Suit many times.
It's a celebratory day until something goes horribly wrong. In the midst of tragedy, Eria uncovers a deep conspiracy in her perfect bubble. If those responsible find out what she knows, they won't stop hunting her until she takes her last breath. 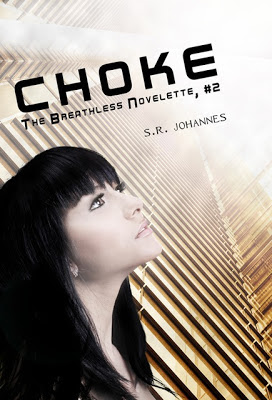 Choke, #2 in The Breathless Novelette series

When Eria escapes her home in the Biome, she uncovers more about her features and specifications as a HumaNot. Following her father's instructions, Eria embarks on a journey into a dangerous and unpredictable world.Along the way, she encounters a young rebel, Dirk, who explains he's from the Anarchy, an underground human resistance rising up against the BOTs--advanced man-made robots gone wild. Together, Dirk and Eria battle underground serpents, desert dingos, sand storms, and advanced Bots that are always hot on their trail. As they become closer, Dirk reveals his hatred of machines, forcing Eria to hide the secret of what and who she really is.
When the truth of her identity comes out, Eria is forced to become the very thing she hates the most.

The two novelettes will be available on ebook only for only 99 cents! The 3rd novelette in the series, Exhale, is scheduled for Nov/Dec 2013 just in time for the holidays.

If you loved Wool, Never Ending Sky, Mila, or Across the Universe, you will enjoy this mini-series.
Posted by Dorothy Dreyer at 7:41 am
Email ThisBlogThis!Share to TwitterShare to FacebookShare to Pinterest
Labels: book launch, Breathless series, Choke, dystopian, Sci-Fi, SR Johannes, Suffocate, YA thriller

Love the covers and the comparison books! rushing off to buy! Thanks for the tip, Dorothy!