Today we have Stephanie Wardrop, author of the SNARK AND CIRCUMSTANCE series of e-novellas. The third book in the series, PRIDE AND PREP SCHOOL, released this week! Check it out, and be sure to sign up for the GIVEAWAY at the end of this post! 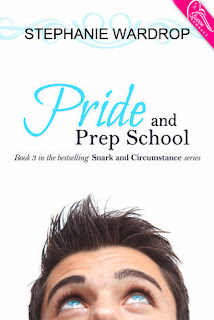 Georgia can’t figure out why the burden of a Y chromosome seems to make guys so hard to understand. First, there’s the handsome but slippery Jeremy Wrentham. After Georgia shared some pretty devastating kisses with him, she found her way home and he found her sister!

And then there’s Michael Endicott, who never fails to let her know that her family’s quirkiness lies too far outside the pale for this preppie townie. But if he really feels that way, why is he in Georgia’s kitchen, asking her out? And why don’t boys come with instruction manuals?

Stephanie was kind enough to stop by and give us some insight into her writing process, and the joys and challenges of adapting Jane Austen to the modern high school setting. Thanks for joining us, Stephanie! 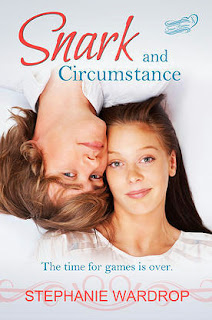 I originally decided to model my book on Pride and Prejudice because it had been a long time since I had written fiction, so I thought it would help to have a model to follow. It’s a great model, isn’t it? As Sheldon put it last night on The Big Bang Theory, “Amy’s beloved Pride and Prejudice is a flawless work of genius. He’s proud, she’s prejudiced - it just works.”

And while that turned out to be a fine idea, it also presented some obstacles, the first of which was answering for myself the question “Do you really think anybody – especially you – is going to write it better than, or even as well as, Jane Austen?” My answer was “no” on both counts so I didn’t struggle too long with that one.

Other problems were more complicated, such as how to translate a pretty distinctly Regency-era social climate into the present day world of an American high school.  But modern high schools are certainly rife with social stratification, people clamoring to climb the social ladder and find a perfect partner, snobs and students who are a little too assured of their own rightness in all matters. Making my Mr. Darcy a preppie from an old New England family seemed like a simple and logical choice, especially since as I began writing I had just moved to Massachusetts. Turning Elizabeth Bennett into a snarky vegan rights activist required my issuing myself a little more artistic license, but it was useful for creating the social and intellectual tension I wanted between my Darcy and Lizzy, Michael and Georgia. 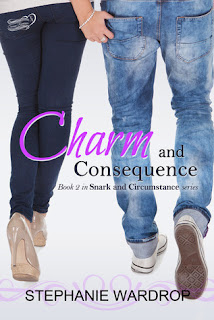 The thorniest problem for me didn’t have to do with the main characters.  It was what to do with all the Bennett sisters.  I cut out one of them entirely (Kitty) but kept the plain and self-righteous Mary’s personality as my model for Leigh, and used Lydia’s flighty boy-craziness to color Cassie’s personality. After deciding who my Lydia figure would be, I wrestled a great deal with how I would translate the social scandal of Austen’s day into our time. Lydia runs off with the dashing Mr. Wickham in P&P and the scandalous couple must marry in order to salvage their reputations and allow them any place in  polite society, but I couldn’t see marrying off a fifteen-year-old in a contemporary YA novel. I thought about her having a pregnancy scare and considering (and having) an abortion, but that didn’t strike me as the right note for what I wanted to be a pretty funny novel.  I, at least, did not prove  adept at writing a hilarious abortion center scene.  So instead I had Cassie get into a scandalous situation by sexting, texting photos of herself to a cad rather than running off with him.  In Pride and Prep School she just starts to get into trouble.  You’ll have to check out Prom and Prejudice to see how Georgia decides to help her sister handle the problem. For now, I’ll just say that I turned to another nineteenth-century classic for inspiration: The Scarlet Letter.

It’s been a great experience writing the novel and also finding readers, whether they’re YA novel fans or the Janeites I’ve met online who love all things Jane Austen. Both are pretty amazing communities to be a part of. 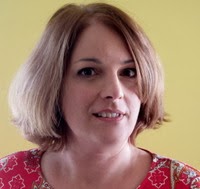 Stephanie Wardrop grew up in Reading, Pennsylvania where she started writing stories when she ran out of books to read. She’s always wanted to be a writer, except during the brief period of her childhood in which piracy seemed like the most enticing career option—and if she had known then that there actually were “girl” pirates way back when, things might have turned out very differently. She currently teaches writing and literature at Western New England University  and lives in a town not unlike the setting of Snark and Circumstance with her husband, two kids, and five cats. With a book out—finally—she might be hitting the high seas any day now.


And now for the giveaway. This is a good one!

One (1) DVD copy of EMMA, starring Gwyneth Paltrow (US Only)

Posted by Elizabeth Holloway at 9:14 am
Email ThisBlogThis!Share to TwitterShare to FacebookShare to Pinterest
Labels: Charm and Consequence, giveaway, guest post, Pride and Prep School, Snark and Circumstance, Stephanie Wardrop, YA Contemporary, YA Contemporary Romance

Stephanie, my husband is a biology professor at WNE! Small world. The books look great!