Today we're chatting with fellow Month9Books author Ryan Craig Bradford about his novel HORROR BUSINESS. Grab a seat and come get to know a bit more about Ryan and his book.
Hi Ryan! Welcome to We Do Write. Tell us a bit about yourself.

I grew up in Park City, Utah. My fiction has appeared in Quarterly West, Paper Darts, Vice, Monkeybicycle and [PANK]. I currently live in San Diego where I act as Creative Director for the nonprofit literary arts organization So Say We All. I'm the co-editor of the anthology Last Night on Earth and founder of the literary horror journal, Black Candies.
Tell our readers a bit about HORROR BUSINESS. 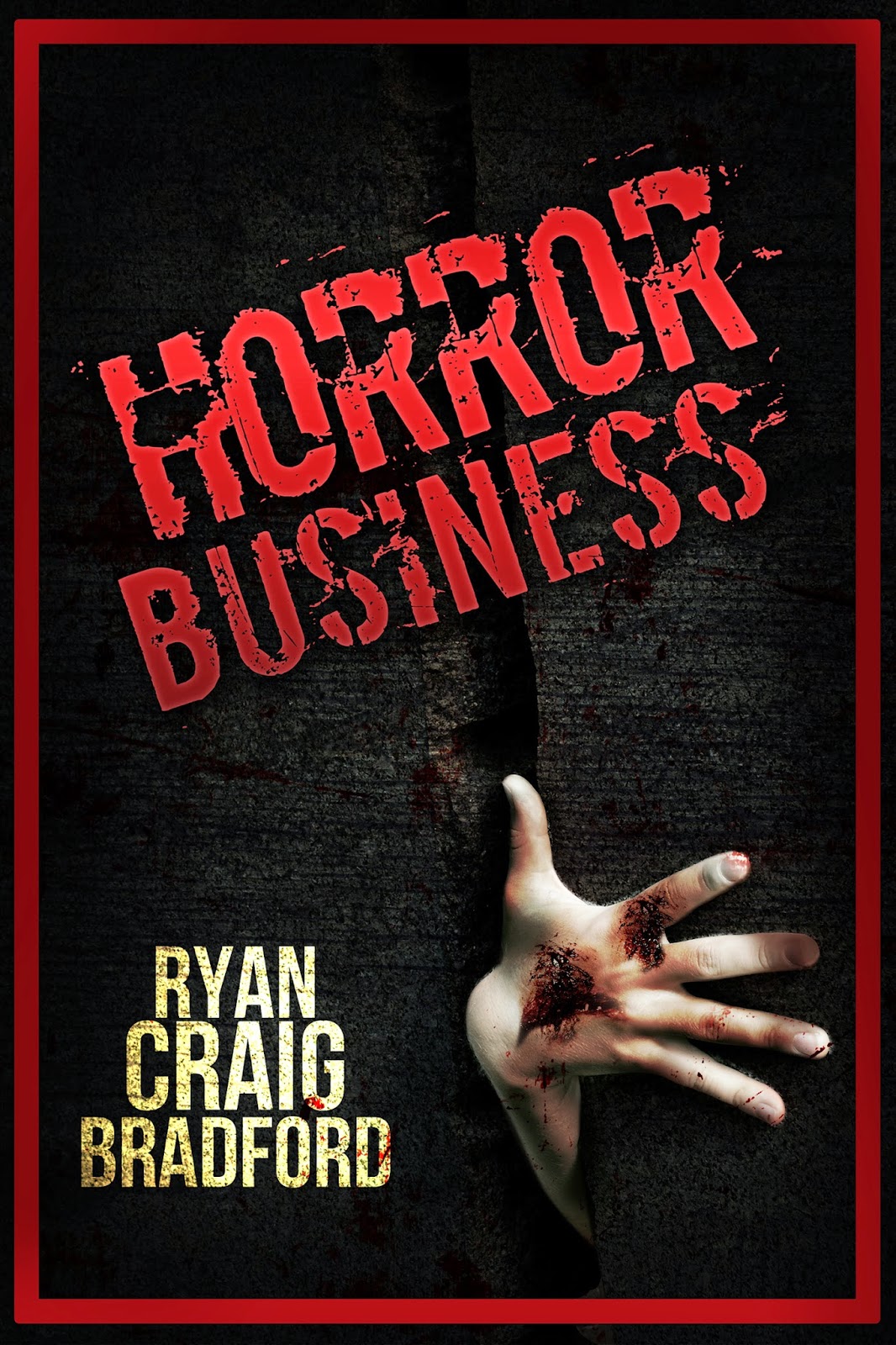 Armed with a passion for classic B-grade horror movies, a script co-written by his twin brother, and a wicked crush on his death-obsessed neighbor; hardcore horror fan Jason Nightshade must finish his student film.

But his plans are derailed when the children of suburban Silver Creek start disappearing – his twin brother among them. Battling a possessed video camera, a crazy zombie dog, a monstrous bully, and a frighteningly broken down family life, Jason embarks on a mission to find his lost brother so the two can write an ending for his story.

As an any horror fan knows, saving the day won’t be easy, as Jason finds himself forced to face the real world where death isn’t just a splash of fake blood on a camera lens.
How did the idea of the story come to you?
Horror Business is very autobiographical. I was definitely one of those weird kids in high school who spent a lot of time in a darkened basement, watching scary movies. I think most people grow out of that phase, but I never did. The story is also set in a small mountain town—a very similar setting in which I grew up. I love the notion of the darkness that hides beneath the surface of small communities, and I think that darkness plays a huge, albeit peripheral, role in Horror Business. It's funny: now that I live in a large city, I get nostalgic for that creepiness that can occur in a small (well, smallish) town.


I do both. I usually write the first draft from the seat of my pants—and it's always this amazingly fun, therapeutic process where I try to get as nasty, loud and upsetting as possible. After I get to a point where I think the story is complete, then I plot a story, incorporating elements of the first draft. It's sort of like killing your first draft but allowing the ghost to infiltrate whatever you write next.


Probably all the money, you know? Sometimes it feels like I can't get any writing done because I spend all my time cashing checks!


Drumsticks. I listen to music for seven or eight hours a day, and there's nothing more cathartic than when you're frustrated and suddenly a great tune comes on—you just air-drum the hell out of it. You look legitimately insane. When the song's over, you politely put the sticks back on the desk and—hey!—suddenly your writing  makes sense.
What are you reading right now?
I've been obsessed with writers who are not afraid to use their literary prowess to be gross, go dark, or create "unlikeable" characters. Juliet Escoria's Black Cloud, Lindsay Hunter's Ugly Girls, Alissa Nutting's Tampa and Laura van den Berg's Isle of Youth are the some that immediately come to mind. Read them. Burn them into your brain.

If you could have any super power, what would it be?
Shape-shifting, maybe. I would love to be able to look like younger version of me and convince people that I'd been transported into the future. I would constantly remark on the wonders of technology and make people feel really cool about being on their smartphones all the time.

What's the weirdest thing you've googled?
I can't really think of a weird google search, but my favorite is "[animal] birthday." Dogs, cats, owls, mice, it doesn't matter. If a google image search brings up an animal wearing a birthday hat or in front of a birthday cake, then I'm into it.

Finish this sentence: If I'm not writing, I'm probably ...
Shivering and scared of the world.

First and foremost: my wife, Jessica. My mental health well being would be shot without her sense of humor, intelligence, and ability to call me out on my shit when I get too full of myself. I would not have any career in writing without her support and patience. Props to everyone in a relationship with a writer, because we are the worst.
Thanks to my family, of course! My gratitude for would fill and spill out of the internet.
Thanks to my agent Rebecca Podos at Rees Literary. She's fought so hard on behalf of my writing in ways that I didn't think were possible.
Thanks to Georgia McBride at Month9Books for taking a chance on publishing Horror Business and all the editors who whipped it into shape.
Thanks to Justin Hudnall and everyone who's ever been involved with So Say We All—you've made San Diego a place for writers. Most writers aren't as lucky to have a community like this.
And thanks to all the people who've published me, or who I've published, or who've read my stuff. There are too many to name off the top of my head, but you're all in my heart.

Desert Safari Dubai provides a variety of all comprehensive packages for distinct types of desert safari, Our desert safari involve many varying options like dune buggies and quad bikes.

If you are searching for your favourite celebrity net worth then visit our website for all celebrities related to entertainment, Sports, Tech and all other famous personalities

you want to Get a trade license in dubai Without an Office- but how? This blog will inform you on the entire process of get a Dubai trade license.

Connect is the Dubai Business Center that offers an ideal choice for fledging companies to easily establish with instant, flexible and ready to use professional office spaces and wide range of services to set up quickly.