Interview with Michael Gibney, author of The Three Thorns

We are pleased to be joined by Michael Gibney, author of The Three Thorns: The Brotherhood and the Sheild! Here's a little bit about this new MG fantasy!

Three brothers born to a once powerful King were abandoned at birth and cast out into the old world as orphans - alone and unaware of the other's existence or their royal heritage.

In the new world, by order of the false King, three of the most lethal assassins are sent to kill the children before they come of age and avenge their father’s throne.
But when the brothers find one another, Benjamin, Tommy and Sebastian must resist the temptation of magic and power if they are to defeat the unspeakable evil that has threatened them since birth.

The Three Thorns is book one in an exciting children’s fantasy series called The Brotherhood and the Shield from debut author Michael Gibney.

Hi, Michael! Welcome to We Do Write. Tell our readers a bit about THE BROTHERHOOD AND THE SHEILD: THE THREE THORNS.

Three princes born to a powerful fallen King have been abandoned at birth and cast out into the old world known as “Earth.” By order of the current false King, three of the new world’s most lethal assassins have been unleashed to kill the orphans before they come of age to avenge their Father’s throne. Following the search, a lone protector is sent to retrieve the Brotherhood back to the new world. No one knows where the children are, and they have no knowledge of one another. But all is set to change when Benjamin, Tommy and Sebastian join together to face an unspeakable evil and the temptations of magical powers. The Three Thorns is book one in this exciting children’s fantasy series.

The Brotherhood and the Shield series is in the same category of such beloved children’s books as C.S. Lewis’s The Chronicles of Narnia, J.R.R. Tolkien’s The Lord of the Rings and Philip Pullman’s His Dark Materials. Without giving too much away, The Brotherhood and the Shield tells the story of a group of orphans growing up in a borstal home in London at the turn of the 20th Century. The series centers around three main characters - Benjamin Brannon, Sebastian Cain and Tommy Joel and their progression from childhood to adulthood.

In The Three Thorns, the orphans struggle to survive in tough upbringings before terrestrial forces call upon them for help from a world beyond their own, which offers answers to their past. They discover this new world called Abasin that has been overrun by a false king who has ruined most of what was good and magical about it and are landed with the burden to put things right due to a birthright each share.

The characters form a Brotherhood together and are helped by many of Abasin's last survivors, most of them magical creatures. Through their journey to rid the new world from evil, the Brotherhood meets friends and foes. Some set out to protect and train them into warriors, while others are on a mission to hunt them down and kill them.

Not all things are what they appear to be in the story of The Brotherhood and the Shield.

The whole subject of abandonment narrowed this particular book for a younger audience, but as I got to book 3, The Lost Prince, it progressed into something else. It became both a children’s series of struggle and victory and an adult book of reflection and loss. Some of my main characters have been based on real people I have met.

The less central characters I created myself. But I got the initial idea from a friend who lost his parents at a very young age and I felt like writing a book for people like him and using this sense of loss and abandonment but giving such characters superpowers to compensate for that loss, that maybe it would give some comfort to such readers.

A lot of the second book deals with one particular character that I believe most readers will relate to. His initial character in The Three Thorns is that of a loveable heroic underdog but his character changes later in the story.

A bit of both. I don’t believe in making a story up as it comes to me because my nature is always to pre-plan and be cautious of decisions I make, both in writing and in life. I have a great deal of foresight, which I use my story and its structure and continuity, however when a great idea comes to me out of left field, I utilize it and incorporate into the story where best suited. I also do not believe in ignoring a potentially amazing concept just because it wasn’t planned. Sometimes the most genius ideas don’t come from us planning anything. I believe they’re given as a gift we sort of download from a higher source or frequency beyond ourselves.

Having the motivation as all writers but mostly when I’m writing, it flows naturally for me. I’m lucky. My biggest challenge is having the mental energy. Using so much brainpower and exercising a muscle like the brain can take its toll on the human body’s energy levels. So having no coffee is the hardest part of writing for me, personally.

Coffee or a strong cup of British tea and a selection of favorite classical film scores playing in the background to get me in the zone.

The gift of flight. I feel this superpower was best executed in the movie Chronicle. This is taken for granted with most comic book characters, but if you think about it, if one could fly in reality, it would be pretty incredible. I’ve always wanted to be able to fly. I think nothing would compare to such an experience, hence why I included it in The Brotherhood and the Shield sequels.

The Paranormal. Both stories and testimonies.
Finish this sentence: If I'm not writing, I'm probably ... writing in my head.

The God of Jacob for giving me the opportunities and talents to create such a daring series as this. My Grandfather for passing down the gift of literature and the ability to write it. My parents who have supported me the most with my career in writing. My agents Liza Fleissig and Ginger Harris of Liza Royce Agency, for believing in this book and pushing it all the way. Tina Sims for being the first person in the Literary industry who saw my potential as a writer and saw the vision in The Three Thorns novel. My editor Jennifer Rees for taking a chance on my debut novel and for doing an amazing job at editing it. My Publisher and everyone at Tantrum Books who have been working hard to promote and get The Three Thorns into the hands of every child and adult fan of the fantasy genre. And to my loyal friend, supporter and advocate, Film Composer, Music Producer and Songwriter, Van Dyke Parks. 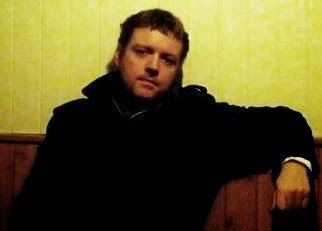 Michael Gibney began working in restaurants at the age of sixteen and assumed his first sous chef position at twenty-two. He ascended to executive sous chef at Tavern on the Green, where he managed an eighty-person staff. He has worked in the kitchens of Morgans Hotel Group, 10 Downing in Manhattan, and Governor in Brooklyn’s DUMBO, among many others. Over the course of his career, he has had the opportunity to work alongside cooks and chefs from many of the nation’s best restaurants, including Alinea, Per Se, Eleven Madison Park, Daniel, Jean Georges, Le Bernardin, Bouley, Ducasse, Corton, wd~50, and Momofuku.

In addition to his experience in the food service industry, Gibney also holds a BFA in painting from Pratt Institute and an MFA in nonfiction writing from Columbia University. He lives in Brooklyn, New York.

Posted by Elizabeth Holloway at 11:44 am
Email ThisBlogThis!Share to TwitterShare to FacebookShare to Pinterest
Labels: giveaway, MG adventure, MG Fantasy, Michael Gibney, rafflecopter, Tantrum Books, The Brotherhood and the Shield: The Three Thorns

I am very agitated that I have discovered your post because I have been penetrating for some information on this for about two hours. You have helped me a lot undeniably and by reading this article. I have found much new and valuable information about this subject. I was guessing if you could write a little more on this subject? I’d be grateful if you could involved a little bit more.
Thanks for sharing it.
essay writing service uk