Today we're joining the blog tour for CLAIMING EXCALIBUR by L.H. Nicole. Read an excerpt from the second book in the Legendary Saga and be sure to enter the rafflecopter at the end of the post! 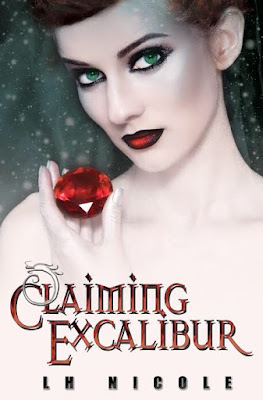 Aliana Fagan has done what many thought impossible: she’s awakened King Arthur from his fifteen-hundred-year sleep, reunited the Knights of the Round Table, and even beaten Mordrid and Morgana LeFay in battle.

But the Destined One’s quest has only begun.

Before the knights can "unearth and reclaim their lost relics" they must survive the trip to Charleston, South Carolina and meet the newest member of the Round Table. If King Arthur’s men thought Aliana and Lacy were tenacious, they'll be even more surprised by Dawn, the third member of the fem-trio.

Deadly secrets, unexpected allies, and a traitor lurking in the shadows await Aliana and the new Round Table as they continue their search for Excalibur. Their only clue is a beyond confusing poem from a mysterious book that speaks of a terrifying creature guarding the legendary sword. Trying to build a somewhat normal relationship with Sir Galahad adds a whole new level of complexity to Aliana’s task, especially when several among them suspect the White Knight may not be wholly himself. Her friendship with King Arthur grows closer, and when circumstances become intense, he may finally get the chance with Aliana that he’s been pining for.


Mysteries, legendary quests, and haunting memories will either unite the members of the New Round Table or fracture their bonds. Aliana and her crew only have seven months before the planets align and Mordrid can seize the power he needs to conquer the seven realms. Can the Destined One keep her new family together and lead Arthur to his destiny of saving the realms? Or will a centuries-old plot for revenge finally spell the king’s end?


“What do we have here? Seven little warriors and a DragonLord lost in a strange land?” a snarky voice said, echoing off the white trunks that surrounded the path.
“Who’s there?” Owen called out.
“Show yourself!” Arthur ordered, drawing his sword. The others followed his lead, drawing theirs. Aliana pulled the bow from her shoulder and nocked an arrow. Dagg jumped from her shoulder and hovered in the air, his purple gaze flicking around the area.
The voice laughed. It wasn’t deep enough to be a man’s voice, but it wasn’t high like a girl’s either.
Son of a biscuit! What kind of trouble’s found us now?
“I’m wounded,” the voice crooned. “Surely you don’t think little old Puck would dare hurt the king of Camelot and his Knights of the Round Table.”
“Puck?” Lacy and Aliana gasped as a short, gangly kid appeared, hovering high in the air above them. He wore a pair of gray breeches and a red and white tunic. The shirt was cinched at his thin waist by a thick blue belt. His pale orange skin stood out against his shocking white blond hair and liquid silver eyes.
“Ah, so you’ve heard of me!” The kid smiled brightly and bowed to the girls from the air.
“We’ve heard of you, too, trickster,” Galahad growled. He and Percy stepped in front of the girls.
“Then my reputation truly precedes me.”
If she hadn’t been so unsure about the “trickster” in front of them, Aliana would’ve been tempted to laugh.
“Are you the Puck from Shakespeare’s A Midsummer’s Night Dream?” Lacy asked cautiously, staring at the creature.
He bowed again with open, devilish delight. “Indeed. Dear old Willy knew how to make a guy famous!”
“Why are you here?” Galahad growled. “You served the king of Avalon last I heard.”
The strange-looking boy tsked. “Poor sir knight. I suppose it’s hard to keep up when you’re trapped in Sidhe amber.”
Galahad took a step toward the kid, but Aliana grabbed his arm. “Don’t, Galahad.”
“Then what is your purpose for interrupting our quest?” Arthur asked. His voice sounded bored, but he watched Puck intently.
Puck lowered himself to just inches off the ground in front of Arthur. “Who says I’m interrupting you?” he asked with an arched white blond brow. “I’m here at my queen’s behest to lead you lot into the safety of Notien.” He bowed again before zipping back into the air, stopping above Aliana. He looked between her and her Dragon guardian. “Well, well, you’re certainly more in person, Destined One.”
Aliana frowned. What did he mean by that?
“We should be going, I think,” he announced with a loud clap of his orange hands. “The queen is not a patient Fae.”
“We’re still some distance from the Summer Kingdom,” Leo said as Dagg lowered himself to Aliana’s shoulder. She could feel the Dragon’s tenseness, like he was ready to pounce.
“Bah.” Puck scrunched his face. “You mortals. So boring. Puck has a much more fun way to travel.” He clapped his hands again.


The sound echoed loudly, like they were in a mineral cave, and white gold lights encased the eight of them. The guys twisted, trying to find a way out of the magic surrounding them, but the light grew so bright they had to shield their eyes. Waves of electricity crackled over Aliana’s skin until she felt like she’d dissolve under the immense power. Then it stopped, and the white-hot light around them vanished.

Aliana Fagan spent her childhood traveling the world, dreaming of legendary heroes and mythical lands. But after the sudden death of her parents, she hides behind the safety of her camera and her art until a vivid recurring dream compels her to dig into her father’s research about Avalon and Camelot. When she is hurled into a magical realm by forces she thought were only the stuff of fairy tales, she finds herself thrown into an adventure she could never have imagined. Nearly everything she thought she knew about Arthurian legend was wrong.

The independent eighteen-year-old is shocked to find that the people of Avalon think that she is the Destined One, the only person who can summon King Arthur back to life from his hidden chamber. Most surprising of all is that it’s up to her to lead the Knights of the Round Table on an epic quest–an adventure that will transport them across the seven magic realms to reclaim all that has been lost so they can defeat the evil Mordrid for good. But first, she must bring the ancient warriors into her world and reunite them with their lost brothers. Chaperoning the legendary knights-with-a-chivalry-complex as they navigate the modern world is a constant challenge, and she certainly never thought she’d be caught between her intense feelings for the noble Sir Galahad and her growing friendship with the King.

To fulfill the prophecy, Aliana will have to discover the meaning of friendship, bravery, loyalty, true love, and forgiveness. But can she do it all in time to save the realms from Mordrid’s impending Armageddon? 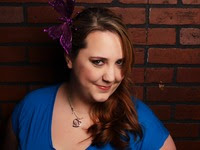 
I am a seasoned Pastry Chef in our nation’s capital and a lifelong fairytale (Disney and Grimm) lover, believes in love at first sight, is addicted to 80’s & 90’s cartoons and anything that can capture my ADD-way-to-overactive-imagination. Joan Lowery Nixon and L.J. Smith were the first authors I became addicted to and who inspired me to steal away whenever I could to read and write.

Love the excerpt and the cover, sounds like an exciting read! Thanks for sharing