Today we're joining the HOLLY HEARTS HEADLINES blog tour by chatting with author Kenley Conrad. Come join us in getting to know more about Kenley and her book. And don't forget to enter the rafflecopter at the end of the post.

Hi Kenley! Welcome to We Do Write. Tell us a bit about yourself.

Hi! Thanks for having me! Well, I’m a crazy cat lady and I live in Arizona. I’m obsessed with Broadway musicals and when I have spare time I like to perform in local productions. I’ve been reading and writing stories my entire life and now I’m just grateful that other people seem to enjoy what I do.

Tell our readers a bit about Holly Hearts Headlines.

Holly Hart has it all: designer clothes, affluent friends, a recording contract, and she’s dating the biggest pop star in America. 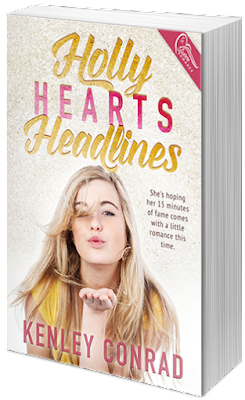 It’s too bad he can’t be seen with her in public. It’s even worse that he seems so very cozy with Lacey, the girl who seems to enjoy stealing Holly’s dream and taking all the credit for their platinum-selling album.

And Lacey? Well she couldn’t carry a tune in a bucket, but that hasn’t stopped her from basking in the glow of the fame and fortune that comes with pretending to be Holly.

Yet, Holly signed a contract vowing to never reveal her true identity as the girl behind the hit songs. Her record label doesn’t want anyone to know their teen dream is really a chubby, insecure girl from Iowa.

Holly needs to focus on finals. She can’t let herself be distracted by the extremely hot and talented Grayson Frost or his prevailing attachment to Lacey. This is the deal Holly made, and she has to honor it no matter how much she hates it.

As if that’s not enough pressure, her grandparents have come to stay, her mom is dating a guy who makes his own deodorant, Shell Shocked Records want Holly to distance herself from Grayson, and she’ll probably end up failing Driver’s Ed.
In a town full of gossip and secrets, Holly wonders just how much longer she can continue to live a double life.

When the media gets a little too close for comfort, both Holly and Lacey are at risk. Soon Holly realizes her dream isn’t only about her and if she is to ever be truly happy, she’ll need to find a way past her insecurities.

The origin of the story came from fairy tales. I was on a modern fairy tale streak and I was trying to think of a unique fairy tale to write about. We’ve seen a hundred and one modern Cinderella’s. I was walking in downtown Phoenix is one hundred and ten degree heat when I thought to myself, “How would The Little Mermaid work if it happened in modern times?” That was when I had the idea of Holly selling her voice to another girl (the witch, so to speak) and the rest was history.

A combo of the two. I do outline and plan my books. I hate doing it because it can get tedious and boring. But, I know if I don’t I’ll end up writing myself into a rut that I can’t get out of. That being said, I have been known to suddenly change my mind and divert from the original plot or plan.

At this time, the hardest part of writing is actually finding the time. The sad thing about being an adult means that I have a day job and I can’t sit at my computer twelve hours a day and write until my fingers bleed. If I do have the time to write, I have a hard time not letting my emotions affect my writing. If I am sad and I need to write something funny it is very difficult to accomplish anything.

I usually have the Nordstrom’s website open so I can look up pictures of designer clothing for visual reference. I also am very strange in that I don’t like to have music playing while I write. I prefer either total silence or I’ll have the TV on in the background with a show or a movie playing that I don’t need to pay attention to. I must have a can of diet Coke and chocolate also!

I actually listen to a LOT of audiobooks because I don’t have as much time to sit and read lately. I love audiobooks! I’m a fast reader, so having someone read a book to me forces me to slow down and pay attention to details I might gloss over.

Right now I’m listening to Pretty Girls by Karin Slaughter. It’s a pretty graphic psychological thriller so I wouldn’t recommend it to everyone. Before that I listened to the audiobooks of The Goldfinch and The Martian. Also, if you haven’t read/listened to The Martian yet DO IT.

Whatever superpowers Professor X from The X-Men has. I’m the kind of girl who likes to have complete and total control over everything.

This is a great question. I have a terrible memory, so I can’t remember the weirdest thing but I can tell you the most recent thing I googled! I just searched “what is the difference between overalls and dungarees”.

Ha! Finish this sentence: If I'm not writing, I'm probably ...

... surrounded by cats and watching too much Netflix.

Oh wow, I wasn’t prepared for this. As always, thanks to my agent, editor, and every other person involved in making my book dreams become reality! I have a great family and some awesome friends who support me in many ways. And the biggest thank you has to go to my boyfriend, Phil who humors me constantly and pretends that my characters are real people.

Thanks so much for stopping by the blog and chatting with us. Good luck with your books!