Today I have the pleasure of interviewing Elizabeth Holloway for the blog tour of DEATH BECOMES ME, book two in the Call Me Grim series. I've had the honor of reading this book while in its development stage, and let me tell you, it's awesome! For the low-down on the first book, click here. Let's dive right into the interview, shall we?

Hi, Elizabeth! Congrats on your second book! Tell us what the sequel to Call Me Grim is about. 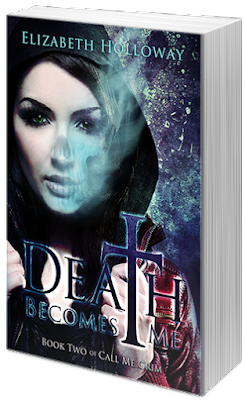 Thanks, Dorothy!
Death Becomes Me picks up where Call Me Grim ends. Libbi and Aaron have broken their vow to be Reapers of their hometown, Carroll Falls, and have escaped. Now they are on the run from Abaddon, aka Death himself, and he’s not one to let things like that go.
Without giving too much away, how have your characters changed in this book?
Libbi has grown a lot since the last book. In this book she struggles with her devotion to her family and friends and her need for survival. It’s a hard path. And when her relationship with Aaron comes into question it becomes almost impossible.
Aaron also has his struggles. But, I’m afraid if I say anything about them, I’ll give too much away, so I’ll shut up now.
What is the biggest challenge for you when writing a sequel?
For me, the biggest challenge was writer’s block. I hate it. So. Much.
I also fought with trying to condense the series into a duology, but I ultimately found that I just couldn’t fit the whole story into two books. That was the hardest thing, I think, deciding the story needed to be a trilogy. It caused a lot of trouble for me. ☺

How have you changed as a writer now that you are published?

Writing as a published author is completely different from writing as an aspiring author. First, there are those dreaded deadlines, which somehow manage to drain me of all of my creativity. Then I worry about the readers and what they’ll think of the story. Self-doubt is my biggest enemy. But I do love the editing process. I love going over the story with an editor and shining that thing up.
What are your writer aspirations for the next five years?
I’m about to start working on the third and final book in the Call Me Grim series, which is untitled at the moment. I also have a YA thriller in the works called Drive. It’s about a teen petty thief who finds a girl tied up in the back of a van and decides to follow the van. I hope to have that one finished next year. After that, I may take a break. I have to go back to school for my job, so I’ll likely have all of my spare time taken up with that for a while.
Thanks for letting us take part in your tour, Elizabeth! Good luck with Death Becomes Me!

Thanks, Dorothy! It was a pleasure being here!

Thanks so much for the interview, Dorothy!