Today we're joining the UNDERGOUND blog tour by chatting with author Alice Rachel. Alice Rachel is the author of the YA Dystopian ROMANCE SERIES “Under Ground.” Originally from France, Alice Rachel moved to the United States ten years ago to live with her husband, and she now also shares her home with two really old foster guinea pigs. Alice enjoys books of all kinds and more specifically those introducing well-written antagonists and complex protagonists. Alice also loves to draw her own book characters. The first book of her series “Under Ground” came out in October 2015, and the sequel will be out later this year. Alice loves to interact with all readers, so feel free to send her a Tweet. 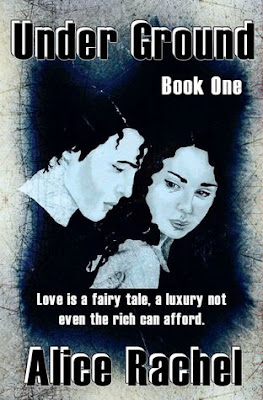 Hi, Alice! Welcome to We Do Write. Tell our readers a bit about UNDER GROUND. What’s the story about?

My series "Under Ground" takes place in dystopian New York State, where the protagonist Thia is forced into marriage with William Fox, a young man she can hardly stand. One day, Thia meets Chi, a boy born illegally, who is also part of the Underground—a rebellious group seeking to overthrow the established government of New York.

If caught in their forbidden relationship, Thia and Chi could face a death sentence. Soon devastating secrets surface from Chi's past, forcing Thia to make a choice that could save her or destroy her forever.

It's a YA forbidden romance / dystopian romance.

I originally wrote the story for Chi. I needed to create him, so I did. And then the rest followed. I wanted a story that would raise important questions and issues—a story that would make the readers think. The story developed around Thia and Chi and I followed the flow.

Definitely a pantser. I write all my chapters out of order, starting with the romance and emotional scenes and finishing with the action scenes. Then I assemble everything together like a puzzle.

I made sure to write the sequel before releasing book 1, so that everything would fit together because I never know in advance where things are going.

Editing. Making sure there are no typos, no grammatical mistakes. I could never do it on my own without my proofreader/editor. Editing is my least favorite part.

COFFEE! A lot of it! And Youtube playing my playlists...

Teleportation. Traveling the world at will. Seeing my family whenever I feel like it. Best power ever! :-)

I don't know that the things I google are weird so much as scary... The scariest things I've googled (besides pictures of Linda Blair in "The Exorcist") probably were about the human body's reaction to tasers, the electric chair, and electrocution... That gives you an idea of the nice things coming in the sequels. *laughs wickedly and grows devilish horns*

I'm not too original on that one, sorry.

What, reading is awesome! ;) Here’s the part where you thank the people who are supporting you. Let's hear your shout outs.

Special thanks to my hubby, my family, my family-in-law, and my editor Liz!

And last but not least, thank you to all my friends who have been there from me for so long: Kylie, Evelyn, Annie, Kathryn, Vera, Erica, and Chloe. Thank you to Nadège and Morrisa as well for agreeing to read my book and for talking about it. And to my new friends, Tuba, April, Sunni, and Emily, thank you for supporting me, for liking the book, and spreading the word. :-)

If I forgot anyone, please come yell at me and throw me your tomatoes. I tried my best not to forget anyone...

Thank you so much for having me on your blog today.
.....

Thank you so much for being part of the tour! :-) Thank you for the interview. I really enjoyed doing it.

Wanna wiseabove to help a 'Plethora Of Wurdz' which are look'n for a new home in your novelty?? Yay!

Q: But [gulp] can anyone tell me the difference between K2 and IQ? A: Nthn. In Heaven, we gitt'm both for eternity HA! Need a few more thots, ideers, wild wurdz (whoa, Nelly! Easy, girl!) or ironclad iconoclasms? Voila!!

VERBUM SAT SAPIENTI: As an ex-writer of the sassy, savvy, schizophenia we all go thro in this lifelong demise, I wanna help U.S. git past the whorizontal more!ass! we're in (Latin: words to [the] wise)...

"This finite existence is only a test, son," God Almighty told me in my coma. "Far beyond thy earthly tempest is where you'll find tangible, corpulent eloquence". Lemme tella youse without d'New Joisey accent...

I actually saw Seventh-Heaven when we died: you couldn't GET! any moe curly, party-hardy-endorphins, extravagantly-surplus-lush Upstairs (in [the] end without end -Saint Augustine) when my o-so-beautifull, brilliant, bombastic girly passed-away due to those wry, sardonic satires.

"Those who are wise will shine as brightly as the expanse of the Heavens, and those who have instructed many in uprightousness as bright as stars for all eternity" -Daniel 12:3, NJB

Here's also what the prolific, exquisite GODy sed: 'the more you shall honor Me, the more I shall bless you' -the Infant Jesus of Prague.