Today we're chatting with Lele Pons and Melissa de la Cruz, the authors of SURVIVING HIGH SCHOOL. Don't miss the giveaway at the end of the post!


Lele Pons was born in Caracas, Venezuela and moved with her family to Miami when she was five years old. She got her start when she created a page on the video-sharing app Vine in December 2013. Originally intended as a fun outlet to showcase her creativity, her vines evolved into comedic sketches and pulling practical jokes on family and friends. Her following grew from five thousand local followers to more than ten million by November 2015.

Today she is one of the most recognizable names on social media, and has been featured in Vanity Fair, The New York Times, Teen Vogue, Time, and more. Lele has been nominated for three Teen Choice Awards, a People’s Choice Award, and a Streamy Award. In 2015, she was invited to the White House by First Lady Michelle Obama to help launch her campaign for disadvantaged kids to go to college. Lele graduated from high school in 2015 and currently resides in Los Angeles, CA.
Melissa de la Cruz is the #1 New York Times bestselling author of books for readers of all ages, including the Witches of East End, Blue Bloods, and Descendants series. 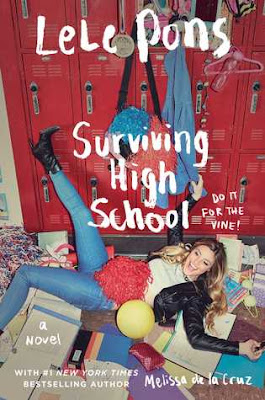 Hi, Lele and Melissa! Welcome to We Do Write.Tell our readers a bit about SURVIVING HIGH SCHOOL. What’s the story about?

It’s loosely based on Lele’s high school experiences, and how she went from a bullied nerd to the most popular girl in school. A lot of the stories in the book were inspired by her Vines and things that happened to Lele.

Synopsis:
Vine superstar Lele Pons—“one of the coolest girls on the web” (Teen Vogue)—teams up with #1 New York Times bestselling author Melissa de la Cruz (The Isle of the Lost) in this lovable debut novel about the wilds and wonders of high school that’s as laugh-out-loud addictive as Lele’s popular videos.

Ten million followers and I still sit alone at lunch. Lele is a bulls-eye target at her new school in Miami until, overnight, her digital fame catapults the girl with cheerleader looks, a seriously silly personality, and a self-deprecating funny bone into the popular crowd. Now she’s facing a whole new set of challenges—the relentless drama, the ruthless cliques, the unexpected internet celebrity—all while trying to keep her grades up and make her parents proud.

Filled with the zany enthusiasm that has made Lele into Vine’s most viewed star, this charming novel is proof that high school is a trip. From crushing your crushes (what’s up with that hot transfer student Alexei??) to throwing Insta-fake parties with your BFFs and moaning over homework (GAH) with your frenemies, high school is a rollercoaster of exhilarating highs and totally embarrassing lows. Leave it to Lele to reassure us that falling flat on your face is definitely not the end of the world. Fans of Mean Girls will love this fun and heartwarming fish-out-of-water story.

I wanted to capture Lele’s Vines in novel form, so it was really important to me to capture her voice and her sense of humor in the story. We spoke a lot on the phone and Lele would tell me the background of her Vines and from there, I put together a plot.

Are you plotters or a pantsers?

We are definitely plotters. Lele also puts a lot of work and background into her Vines, we plan everything out in advance.

Getting started. The blank page is hard. But once I’ve overcome that initial anxiety, it’s easy.

The ability to be everywhere at the same time.

I’m a bit of a hypochondriac so I’m always googling weird symptoms and convinced I have some odd disease.

Finish this sentence: If I'm not writing, I'm probably ... shopping.

Haha, awesome! Thanks so much for stopping by the blog!