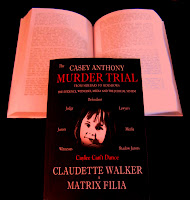 The bond of mother and daughter is so strong that when it breaks, it makes a sound as loud as thunder. How can a person not report their child missing? How can a woman go on with her life as if nothing happened? How does a child die when she is not at risk from war, gun violence, drugs, illness, or any kind of physical abuse? How, you ask? We could not understand it, either. When we heard of this case, it was as though knives stuck through our hearts. The circumstances surrounding the death of Caylee seemed fishy at best. One moment she is alive and the next dead, while her mother parties all around Orlando, Florida. To the authors, this was more than shocking – it was unimaginable. We share a bond as old as time, and the thought of this horrific act seemed like something out of a bad movie script. However, it was real – too real. From day one of the trial, the circus began. We were shocked at the lack of ethics from both sides. Lawyers on each side tried to make names for themselves at any cost. We watched with disbelief at the first-ever televised jury selection. Did they really think people would not recognize their neighbor or relative by their voice and their answers? It seemed as if the jury was on trial, and to be honest, we both believe this part of the trial should not have been televised. The opening statements were a bad attempt at justice, at best.
We set out to find answers, not only as mother and daughter, but also as human beings. Why did Caylee have to die? Why was she dumped like garbage in a snake-filled swamp? Why was there duct tape across her mouth? Why did her mother not care? We had so many questions and so few answers. We could never imagine our lives without one another and the thought of one of us in danger without the other leaping to her aid is incomprehensible. While watching this trial, we both felt the American judicial system would work; that the process would sort through the garbage. We put the American justice system on trial in our book. How would it and the world respond to a white, young, pretty woman who is accused of killing her sweet, innocent daughter? Like most people out there, we did not know how to respond to any of it. We wrote this book about the trial, in an attempt to understand.
To our knowledge, this is the first time that evidence such as Facebook, e-mails, text messaging, and high tech computer forensics has been used in such a high profile case. We called this trial the technological circus of the century. With law enforcement’s ability to ping cell phone locations and introduce evidence of the defendant’s and witnesses’ minute-by-minute thoughts and actions, the jury in this trial became overwhelmed with mountains of technological evidence. Likewise, the use of forensics was amazing in this trial. There was evidence of everything – even what movie had been checked out by the mother and her boyfriend. However, some of the critical evidence was left to a battle of conflicting evidence from experts. Could any witness determine the cause of the smell in the trunk? We could, but not all of the experts were so sure. We watched the spectacle of horrors as each side claimed to know what really happened.
We agree the lawyers’ jobs were tough, but at times we felt the real reason for being there had been lost. That reason was Caylee. It turned our stomachs to see the mother was mostly devoid of emotion, except when prompted by cameras in the courtroom and glances from the jury. Could there have been more evidence? Our “house lawyer” says yes, there can always be more. We did not want this child’s story – that of not only her life but also her death – to be ignored, to be lessened in any way. The trial brought us a new perspective on how the American legal system handles itself and how we as humans just cannot grasp every situation. A jury acquitted the mother, but did not find her innocent. There is a difference. We do not agree with the verdict but we respect it. We must question the system and the process that resulted in the verdict. We will follow the law and try to wrap our brains around what happened. We hope, through reading our comprehensive book about the trial, people can glimpse what happened in the courtroom and judge for themselves. We hope our book will inspire necessary changes in the legal system. This experience has strengthened in us a sense of togetherness that we felt could not get any stronger. It does not really matter how the trial ended – no verdict could undo the ultimate, awful reality. A little girl went missing, her disappearance went unreported, and she died. No one can bring Caylee back. For all of us, the wind whispers the names of Caylee and those of the many children who have needlessly died.
The Casey Anthony Murder Trial is available in bound book & ebook online at Amazon http://www.amazon.com/Casey-Anthony-Murder-Trial/dp/0971629277/ref=sr_1_1?ie=UTF8&qid=1322676310&sr=8-1
Read more at  http://www.abacusbooks.blogspot.com/   Ingram Distributors for bookstore distribution.

The first draft of this article was written by my daughter, Matrix Filia.

I could not be more proud of the woman she has become. I love you, Mom

Ya gotta love an author who names her daughter Matrix.