Happy Thanksgiving! Hope you're all surrounded by family and food and fun today. Speaking of fun, let's whet our appetite with an interview with a tasty writer. Say hello to Mariam Kobras. 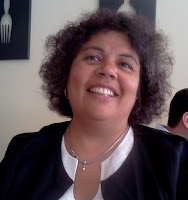 Mariam was born in Frankfurt, Germany (where I live now, how cool!). She lived in Brazil and Saudi Arabia as a child before her parents decided to settle in Germany. She went to school there, studying American Literature and Psychology. Now she lives in Hamburg with her husband, two sons, and cats.

Welcome, Mariam. How long have you been writing?

As a teenager, I dabbled in writing, like most teenagers do, I believe. At university, studying American Literature and Creative Writing, I wrote quite a lot, but mostly assignments, nothing like a novel. The “serious” writing started a couple of years ago, when I began with “The Distant Shore”. Took me about a year to write it. Right now, I’m working on the sequel. It’s nearly finished.

Tell us about THE DISTANT SHORE. What's the story about?

“The Distant Shore” is the story of Jon Stone, famous rock star and composer of great songs, and his love for Naomi. He met her when they were quite young and she sent him some lyrics she wanted him to use in his songs, and they lived together for a while, but then his Hollywood life drives her away. Many years later he receives a letter from a teenage son, and he travels to Norway where Naomi lives now, to find her and, well, win her back. Everything is just fine for a while, they fall in love all over again, even get married, she agrees to return to LA with him, they work together again... but, well, disaster is waiting to strike.


You’ll have to read the book to find out more. It’s quite dramatic. I’ll tell you this much: a very beautiful dress will get badly ruined at the Academy Awards Night.

Yikes! How did the idea of the story come to you?

Actually, in the writing. There is one scene in the book, quite early in the story too, where my protagonists, Jon and Naomi, meet again after many years. This takes place in the lobby of Naomi’s hotel in a small Norwegian village, and seeing Jon there, she drops a tray with plates. It’s quite dramatic, and I wanted to write this very badly. Of course I needed an opening to lead up to this situation, so I made up the story of a letter reaching Jon in California, informing him of an unknown teenage son. This makes him travel to Norway, and...that crashed the plates.
After that, I just kept writing. And the book happened.

I had a few beta-readers, friends I met on twitter, but no group or partner. Well, on second thoughts I DO have a partner, my lovely publisher and editor, MaryChris Bradley. She made a book out of a beginner’s wild, rambling writing.

I’ve been thinking about this one since I got this mail.
The hardest part about writing is not being able to type as fast as I think. Writing is very easy. It’s pouring brain images into the keyboard, a nearly unconscious thing. I don’t think when I write.

Coffee, my headphones, my MacBook. I can write anywhere, and at nearly any time. To be honest, I DO write nearly all the time.

Super power? I don’t know. I don’t think I want any super power. If I could ask for anything it would health and the energy to go on writing for a long while yet.

Quick writing test! Use the following words in a sentence: medication, college, and ballet.

The best medication, she had found, was an evening at the ballet after a long day at college, and evening filled with music and the grace and beauty of the dancers who seemed to float through life and never had to fight the printer in the library.

My husband and my sons supported my writing well before there even was a thought of getting published, in fact they pushed me when I was ready to quit. My friends on twitter, who read my novel (and who are reading the new one as I write it) and clamored for more, carried me through the writing and all the way to the last sentence of “The Distant Shore”.

Most of all I want to thank my publisher though. She had the patience and faith to let me grow from an “aspiring writer” into an author, and held my nervous paw through the publishing process. I am very lucky.

You can find me all over the place!

Mariam, thanks so much for chatting with us. I wish you much success with your books!
Posted by Dorothy Dreyer at 8:40 am
Email ThisBlogThis!Share to TwitterShare to FacebookShare to Pinterest
Labels: Mariam Kobras, MaryChris Bradley, romance, The Distant Shore

Wow, now that's some traveling in her childhood. ^_^ Premise for the book sounds interesting, different take from others recently released. Cliffhanger-esque there with the "disaster is waiting to strike". Definitely understand the not being able to type fast enough to capture the ideas. My issue is from not always having a keyboard close to tap out those great ideas...have contemplated getting a recorder. Nice job on the writing test! Thanks for sharing ladies! Have a great Thanksgiving!