Happy Monday, everyone. Hope you had a nice weekend. Today we welcome writer Brian Anderson to the blog. 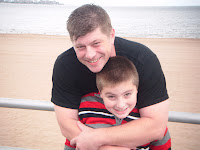 Welcome, Brian. Tell us a bit about yourself.

I live in Staten Island, NY with my wife Eleni and son Jonathan, though I'm originally from Spanish Fort, Alabama.

I've been writing since I was a young teenager. Short stories mostly, but I did attempt a novel here and there. Unfortunately, back then, I didn't have the patience to see them through. Basically it stayed a fun hobby for many years, until recently. I had never really considered attempting to publish anything, even though my family and friends were constantly at me to do so. In fact, if it wasn't for my son, I would probably still be writing weird little stories or working on some English Literature or poetry analysis project, for a class that someone in my family didn't really want to take. I must say, I'm happy that's not the case.

Tell us about The Godling Chronicles. What’s the story about?

The first installment of The Godling Chronicles is about a seventeen year old “boy” named Gewey Stedding. He has been raised from infancy by a human farmer in a small rural village, though Gewey has no clue he is anything other than his fathers natural son. The story picks up two years after his fathers death, (his mother having died when he was a toddler). In short order he discovers that he is not, in fact, his fathers son, but the only being ever born from the union of two Gods. This revelation is presented to him by Lee Starfinder, a demigod (though I chose not to employ that overused term in the book). Lee explains that a being referred to as the Dark Knight (only one of his many names) has stolen a weapon called the Sword of Truth. With it he has locked the door to heaven, trapping the Gods. Gewey must then flee with Lee, as certain events have cause the Dark Knight to become aware of Gewey's presence. Lee is charged with the boys training so that he can face the regain the Sword and save the world.
Along the way they rescue an elf woman from the clutches of fierce bandits and she joins them on their quest. But she will not be the last. The reader will meet a diverse cast of characters (both good and evil) that I found myself caring deeply about, as the story developed.
Without giving up to much of the plot that's the basic storyline.

Actually, the original concept and basic premise came from the mind of my eight year old son Jonathan (a fact reflected on the cover). He has always had a wonderful mind for stories but when he came to me with this one, I knew it must be written. The prologue is almost exactly as he described it to me (though the language is mine) as is Gewey and Lee Starfinder.


Even now I still consult him as the world Gewey lives in expands, and he never fails to inspire me. Don't misunderstand, this is not a book written for third graders. It's classification as young adult/fantasy is due to the fact that there is no overt sexuality or foul language.

All of the above. My wife and several of my friends have been a great help to me. I have also had the fortune of being associated with a few literary professionals who have helped as well. But let's face it...a book becomes a book when it's copy edited. Sean Brandt and Jessica Sigafoos worked tirelessly on this project. Without them it would have never left my desk.

A bit of both. I try to plan out a story, but with The Godling Chronicles, things seem to fly off in different and unintended directions. I think it keeps the story fresh. However it does make keeping track of things a chore.
Book two has been a bit more formulated, but I still find it taking on a life of its own. Perhaps by the end of the series I'll know exactly where it's going.


For me it's reigning back the unnecessary descriptions and dialogue so that the story flows. I prefer a good read to an academic exercise.
Take Tolkien for example. I LOVE, LOVE, LOVE Tolkien, but there are times I could do without some of his more elaborate descriptions. Understand that I am in no way comparing myself to a man whom I consider one of the greatest literary minds in history, and even if I tried I couldn't paint a picture with words in such detail, but I do get a bit long-winded if I don't monitor myself. More isn't always better...sometimes it's just more. I want the reader to enjoy the story without laboring through it.


Coffee and smokes. Yes, yes, I know...how 1960's of me. Other than that, I only need the time. Lately, I have been working harder on promoting book one than writing book two. Still, I try to write at least a few pages a day and I'm hoping to send it to editing within the next few months.

The ability to spell without spellcheck.

I can't really answer and have anyone who knows me read this blog. Kidding. I guess I would have to say the first time I googled my own book. It was so strange to see it popping up everywhere. I was both astonished and excited.

Quick writing test! Use the following words in a sentence: bespattered, taxonomist, and re-embodied.

The mud bespattered troll climbed to the top of the hill to see speak to the taxonomist about his findings on re-embodied billy-goats.

My wife Eleni , my son and inspiration Jonathan, Tom Riddell, George Panagos, all my friends from back home in Alabama (too many to mention individually) The Hellenic Classical Charter School in Brooklyn, NY.(I had a wonderful time reading to the students), and all my fans on www.facebook.com/thegodingchronicles

Amazon.com, Barnesandnoble.com, booksamillion.com, are the main sites, as well as over a dozen foreign websites in countries across the globe.


Sounds great! Thanks so much for chatting with us, Brian. I wish you lots of success with your books!
Posted by Dorothy Dreyer at 3:56 pm
Email ThisBlogThis!Share to TwitterShare to FacebookShare to Pinterest
Labels: Brian D Anderson, The Godling Chronicles

Wow..was it me or was that writing test harder than usual? Good job though! Sounds like an interesting read and I loved hearing how the story came into being. It's wonderful that his son is incorporated in the project's development...talk about a bonding experience to last a lifetime. Best of luck on book 1 and book 2 in progress! Thanks for the great interview Dorothy! Happy reading....

Thanks. The writing test was a challenge. I did a sort of post billy-goats gruff thing.
It was, and is a deeply rewarding experience to gain inpiration from my son. He's asked me to write other stories he thought up, but I refused. I told him he should do it.
I enjoyed the interview and want to thank Dorothy for the opportunity.