I hope everyone's had a nice weekend. Let's give Monday a softer touch by getting to know writer Margaret Callow. 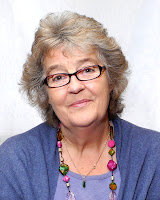 Hellow, Margaret. Tell us a bit about yourself.

Living near Norwich in the UK. Married with grown up children and a host of grandchildren!

I came to writing novels late after a working life as a nurse, but I have written poetry since I was very young, much of which has been published, so I suppose the answer to the question is about three years.

Tell us about A REBELLIOUS OAK. What’s the story about?

It's historical written as a novel. It's a true story about a rebellion in Norfolk in 1549 known as Kett's Rebellion so I have taken a factual skeleton and hung fictional flesh on it.

What a great description! How did the idea of the story come to you?

Partly because my love for social history and also because when I was researching the maternal side of my family, I found my great, great grandmother was a inmate pauper in a workhouse in 1900 when she was seventy. It inspired me that there must be so many stories waiting to be told, not about famous Kings and Queens or the wealthy, but about ordinary people who lived in the past. I have written a novel which is set in Victorian times about those who live just under the surface of respectable society and am now writing about East Anglia which played a part in the Peasants Revolt in 1381 which is a WIP.

I am part of a forum group on Authonomy which is a critique group for Historical Fiction and I'm editing A Rebellious Oak at the moment with the publisher.

I do a lot of research so I suppose I'm a bit of both, but the actual story just unfolds as I go along.

When I stop writing!

A view of my garden and a cup of coffee.

Sounds perfect! If you could have any super power, what would it be?

The ability to go back in time and see past centuries for myself.

A look at my childhood home forty odd years ago, thanks to Google Earth!

Quick writing test! Use the following words in a sentence: slyness, familiarized, and horse.

As he spurred the horse on, he familiarized himself with places he passed missing no details, not difficult with his natural slyness.

First it's got to be you, Dorothy on FB who has given me the chance to write this, the good people on Authonomy and there are many who've always given me honest but kindly help, new friends I've made in the 'virtual' world in Barbados, USA, S. Africa and Taiwan who have been awesome and so unselfish with their encouragement and Running Hare Press who have enough faith in me to want to publish my book.

Aw, thanks for the shout out. And finally, where can people find you and your books online?

I have a website that was started for me, but is defunct at present and Spirit of the Butterfly and Of Wheat and War are still up on Authonomy at the moment. Running Hare Press are on FB and have a website. As for a Rebellious Oak, the launch will be mid' March in Wymondham just outside Norwich. All bookstores will be sent details from Neilsens Book data and hopefully Jarrolds, Waterstones and Ceres Bookstore in Swaffham will stock it. I guess it will be on Amazon too.


Running Hare Press will have the book available in their online shop.

Sounds fabulous. Thank you so much for chatting with us, Margaret. Your book sounds great, and I wish you lots of success.
Posted by Dorothy Dreyer at 7:40 pm
Email ThisBlogThis!Share to TwitterShare to FacebookShare to Pinterest
Labels: A Rebellios Oak, Authonomy, Margaret Callow, Running Hare Press

If you need another book, try my giveaway. :)

Stop by and complete the entry form if you like.