Welcome to We Do Write, Michael. Tell us a bit about yourself. 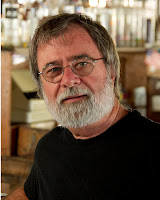 I was born and raised outside of Boston - North Quincy, Massachusetts - and in high school began working at the Record/American-Sunday Advertiser newspaper in Boston. From that point on, I have pretty much kept journalism as a trade, sometimes as a freelancer and in Key West, where I moved more than 15 years ago, as the business editor/writer of the local daily paper.

I think in some form I have written since I got bit by the Ernest Hemingway bug. I spent many years as a very good (oxymoron) drunk and not so good of a writer. Since moving to Key West I have switched those positions and writing has been my priority.

Tell us about STAIRWAY TO THE BOTTOM. What’s the story about?

A little more than a year ago, a local character that worked at a Jet Ski business showed up, told the crew "agents are after me, I gotta run," and took off with a Jet Ski, never to be seen again. I thought about it and wondered, "what if" and came up with two theories and decided to put them both in the book. So, my character walks away from witness protection after more than ten years. He was a hit man for Boston gangster Whitey Bulger and since Whitey's capture, my character goes after Whitey's hidden fortune, chased by US Marshals and FBI agents. On the other hand, retired Cold War spies from Europe hear the story and to them two and two doesn't have to equal four and they decided the age, description, etc. of the man fits the double agent that took off with more than $20 million in diamonds.


Since Murphy, my protagonist, discovered the body of a Cold War female hit man, everyone wants to question him. To Murphy it's a comedy of errors and bad judgment, to the various parties it a race to riches. The story has the background feel of the Maltese Falcon in that those chasing the money and/or diamonds have no real evidence that it exists, only rumors, but they give chase, out of greed, anyway.


The book moves from Murphy's laughing at the foolishness to a blackness that changes Murphy's life forever.

What else have you written?

I have seven books. One, the third in the Mick Murphy series (not the KW part of the series) is being rewritten and I have to find an ending to it. Book six of the series, is at the publishers (and has been for more than a year) is called Car Wash Blues and will be out in August 2012. Book seven is Stairway to the Bottom.

For Stairway to the Bottom I had a critique group go through the story and also had a professional editor see it after that.


I plan but mostly beginning, middle and end and let the story work its way through to the end. Never, and I mean never, has the story gone exactly as I thought it would at the beginning. That's the fun of writing, discovering your characters and doing what they tell you.

Facing the blank screen. The beginning because it's so important but also each new chapter begins with a blank page.

Music, my American Heritage Dictionary and shelves and shelves of books - some of them for research, others to remind me that I am trying to compete with the best. I am happy to compete, even though I may never win the race.

The ability to have mind control over the book editors at the NY Times.

Why not have mind control over everyone? I've got a teen and a pre-teen at home; I could use that power. What's the weirdest thing you've ever googled?

As a mystery writer almost every Google is weird. Tracking down obscure weapons and discovering only I think they're obscure because there's a lot of info out there on 20mm rifles and rounds.

Quick writing test! Use the following words in a sentence: industrial-strength, admirer, and optician.

The local optician had many admirers since his discovery of an affordable, industrial-strength lens for glasses that helped the near blind see.

My biggest supporter has to be my sister Patty, who has had a life-long belief in my abilities, even when I had doubts. Her encouragement and life example has been/is very important to me. My twin daughters, Seanan & Chela, have always been a force driving me to succeed. Life wouldn't be the same without them.

My website: www.michaelhaskins.net and when I need an excuse not to work on my novel or am too tired to read, I sometimes blog: www.chasinthewind.blogspot.com.


Thanks so much for taking the time to chat with us, Michael. Good luck with your books!
Posted by Dorothy Dreyer at 7:54 pm
Email ThisBlogThis!Share to TwitterShare to FacebookShare to Pinterest
Labels: Michael Haskins, Stairway to the Bottom

Fun interview! The book sounds like a good read and reason to check out your others!