This is an interesting thing for me to write about because I don’t typically concentrate on any world building; my novels are character-driven novels and the world is a backdrop. In the case of In Between Seasons the world isn’t all that much different than the world we live in now, except for the fact that family life is much more nuclear. 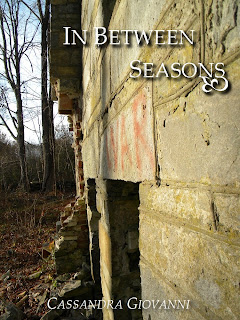 When I began writing the novel I basically used the theory of what many “dooms day preppers” use and used what I know about some preppers to create the locations that the characters would be in. I did think about things like how they would have electricity, but this was a relatively easy fix: solar panels. I wasn’t going to have Kate sit there and explain every nuisance of her life, though because to her it’s normal so there would be no reason for her to do that. She does squint her eyes against the glare of the solar panels and that’s how it’s dropped in. Electricity really does run most everything that we currently have so they still have TV’s—no cable of course, you never see the characters doing anything besides watching old DVD’s. They also have most manufactured products because people can still obtain these things because we can cook, sew, etc without the need for machines. Oh, and Pop Tarts are like cock roaches, they last forever.

There are certain things, however, that are less common in the world like jewelry. The reason for this is simple, without mining and little contact with other tribes, all the metal were melted down for ammunition, which is another limited resource.

The challenge with the world building in this novel was not giving too much away because then it would have explained everything, which none of the characters can do in this novel because they truly don’t know much of what is actually going on. The second novel of The Fall series, Permafrost, will have more world building because the characters in it actually have knowledge of what occurred during the fall, and what happened in the aftermath.

Kate and Hunter were removed from the chaos when they were very young and they only know what they were told. In order to keep control of their tribes, both their parents didn’t tell them or the other younger tribe members what happened and what is going on in the world now. They work on the basis that the world has broken down into tribes of people who prepped before the downfall of the government and now they are at war with one another to keep what they pillaged. The tribes have a military hierarchy based on the fact that they are always at war, and the world is based on a patriarchal view (essentially, women play very simple roles of farming, cooking and most of the women Kate knows are quite lazy). There also had to be a separation of those with different roles. In the case of the Marks tribe, there is a farming base that provides supplies and food, a headquarters where the Chief is located, and an army base where the men train and those married women live and basically do nothing. Women are not expected and should not be trained to fight. These things are all a cover for what is really going on, but you’ll have to read Permafrost to learn about that.

BIO
Cassandra Giovanni is an avid writer of young adult novels and can’t wait to share her work with you. The genres of her novels include dystopian, paranormal, mystery and romance all aimed at appealing to adults and young adults alike. Her personal goal with her writing is to show the reader the character’s stories through their dialogue and actions instead of just telling the reader what is happening. She began writing at a very young age, in fact from the moment she could draw she was telling stories that way. At age seven she won a contest in American Girl Doll to have a chapter she had written published. From that point on she was always writing, if not on paper than in her head. In May 2012 she published her first novel, In Between Seasons, which demonstrated her unique writing style and approach to the genre of post-apocalyptic fiction. On Halloween 2012 Cassandra released her second novel, Walking in the Shadows. This novel puts a new twist on the obsession of vampires in literature and explores some of the darkest parts of human nature, while still showing that there is always hope–if we only choose to believe in ourselves.

Cassandra is also a professional photographer with areas of interest such as car features, floral and architecture. Her photography company, Gio Design Studios, will be transitioning into a publication marketing company that designs covers and marketing materials for authors utilizing the company’s photography. She is currently studying to receive her associates degree in Marketing. Cassandra is happily married to the man of her dreams and they live in the rolling hills of New England with the other love of her life their dog, Bubski.

GIVEAWAY
1 Rafflecopter:
US ONLY: 1 Paperback and Bookmark
International: 1 Ebook

Posted by Dorothy Dreyer at 9:06 am
Email ThisBlogThis!Share to TwitterShare to FacebookShare to Pinterest
Labels: Cassandra Giovanni, guest post, In Between Seasons, post-apocalyptic novel, world building