The following is a press release about author OM Grey's novel AVALON REVISITED. 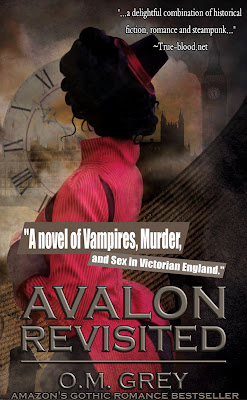 RAB president Lori Perkins said the book was brought to her by Grey’s agent, Louise Fury. “She came into the office breathless and told me she had found a masterpiece. I started to read it immediately and was hooked in the first chapter, so I read it straight through the night. I know our fans will love it as much as I did.”

“Avalon Revisited” follows the adventures of Arthur Tudor, who has made his existence as a vampire bearable for over 300 years by immersing himself in blood and debauchery. Aboard an airship gala, he meets Avalon, an aspiring vampire slayer who sparks fire into Arthur’s shriveled heart. Together they try to solve the mystery of several horrendous murders on the dark streets of London. Cultures clash and pressures rise in this very steamy tale.

Perkins points out that “As a bonus to new readers, RAB enticed Grey to include the first chapter of her next novel in the series, “Avalon Revamped,” in the e-book version.

An enthusiastic review of Avalon Revisited” from Bitten by Books was typical: “From its opening scene until the final page, this intriguing novel engages the reader’s interest...witty dialogue, historical authenticity and mystery result in a highly entertaining novel.” True-blood.net said of the Grey novel: “A delightful combination of historical fiction, romance and steampunk.” And Old Towne Books & Tea said: “Fans of Gail Carriger will LOVE ‘Avalon Revisited’...Pick it up-it’s a great read.!”

Oliva M. Grey writes dark fiction, paranormal romance and sexy Steampunk. Her short stories and poetry have been published in magazines and anthologies. She is a popular conference and convention speaker who blogs and podcasts relationship essays covering such topics as alternative lifestyles, deepening intimacy, ending a relationship with love and respect and other deliciously dark and decadent matters of the heart and soul. For more information on the author, visit her blog http://omgrey.wordpress.com.