Today we're chatting with author Damon Marbut about his novel, AWAKE IN THE MAD WORLD.

Welcome to We Do Write, Damon. Tell us a bit about yourself. 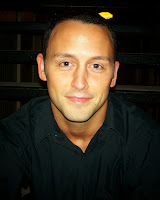 Hi, Dorothy. I’m originally from Mobile, Alabama but have bounced around the country and have lived in an assortment of great and not-so-great places, but most always with amazing people, which makes the not-so-great tolerable and often spectacular. I now live and work full-time in New Orleans, where I’m finishing a new novel and waiting for a few other books currently with presses to find their homes. It’s an athletic time for all these projects in motion, but exhilarating as well.

Since about sixth grade. I carried folders of poems and short stories around with me, skipped class to hide in the library (which was difficult to pull off because my godmother was the librarian). But as far as producing professional work, in education, academia and trade, I’d say a decade now.

Tell us about AWAKE IN THE MAD WORLD. What’s the story about?

Awake in the Mad World is a story about a group of friends in various stages of continuing or ending their relationship with university life and entering the “real world” that follows. It isn’t a wholly unique concept, but what sets it apart, I think, is that they’re writers and philosophical thinkers, graduating or already graduated from similar academic fields, and so they’re sharing that struggle to identify themselves as such against a world outside of college that doesn’t seem to care too much how big one’s vocabulary is or how passionate one is about the arts and inward-searching and self-discovery. It’s really about friendship and accessing that crucial soul-cry within ourselves to state to the world around us that we’re never going to give up on chasing what we think is beautiful and important in our lives.

I began to write it, honestly, for fun back when I was in graduate school. I had these great characters I was basing on myself and my friends. Simple as that. I loved how they interacted, and largely got by with making little up because I could just watch us all go. I was writing a few other things at the time, more dense projects—poetry volumes, a novel about madness—and so the levity I experienced with writing Awake in the Mad World was put on hold for a few years so I could muscle through that more difficult stuff. I told an interviewer this same story a few months ago, and she was surprised to learn I actually wrote the book over a seven year span. But I think, for me at least, it’s hard to write something appropriately, if you want to tell the truth, when you’re in the middle of it. The novel I’m writing now is the same way, but because I know that about myself it’s taking me a year to get to that point I found myself at with Awake in the Mad World after six years and realized I wanted to finish it, since I’d lived enough of it and processed it and could continue with accuracy and finality. I can say that imaginary “The End” felt incredible.

I understand it's an entrant for the Pulitzer Prize for fiction. Can you tell us more about that?

From what I understand of the Pulitzer Prize (which I’ve ascertained from a recent NPR spot I listened to at home), the intention of the prize is to give voice to novels that otherwise might be lost in the publishing market’s chaos, but novels that represent the American psyche and have literary merit. I set out to achieve that end when finishing the book, but without saying it exactly that way. I just knew I was influenced by music and poetry and I wanted the story to have that as its guide more than anything else. I already knew there was an existential, and American, conflict in the book, being offset by joy and hope. The rest the Pulitzer committee looks for is up to them. I’ve done my best with the telling of these characters, in an arguably cinematic way, and the message they embody. I do, however, have a friend in Atlanta who used to sit in on the Pulitzer selection processes—I don’t know how she earned the privilege—but she said it was a thrilling moment to experience. I think she’s excited more than I am. I’m more focused now on the best I can put into this new book.

I self-edit. In graduate school I was taught to be fiercely critical of myself. I do, however, ask a core group of friends—in Korea, here in New Orleans, in California, and in Ohio—to read a draft before I move ahead with it. Usually they find typos, where I’ve gone over it so much I can’t see the “to” instead of the required “too,” for example. I think a line or two have been slashed because of their respected eyes, but generally (and I’m fortunate) they just insult me for how solid the draft is and, if they’re in town, we go out to dinner.

I have no idea what that means.

Letting go for a day. When I’m working on something which, for the last eight years, has been constant, I have a hard time separating myself mentally from the work to enjoy something as simple as cooking or going to see a movie. I see it was necessary time away from the keyboard, but I still feel I’m wasting my time. I pretend I don’t put much pressure on myself, but I know better. I end up admitting it in interviews...

A clipboard or legal pad with a few pens. Everything else is negotiable.

The ability to stop someone’s cruel thought from becoming an action.

I’m pretty serious when I’m online, so I doubt I’ve Googled anything weird. Plus, I have friends who work for Google and they make me paranoid about it.

You, firstly, Dorothy. I really do value those who take time to seriously engage in the literary community. There’s a lot of ridiculous noise and insincerity “out there,” so thank you for your interest.

And others...the late Michael F. Shugrue of New York, one of my mentors and best life teachers, the poet Sue B. Walker, also a friend and inspiration, Michael at Reality Distortion Movement Arts, Greg, Josh and Dustin in California, Mistica, Devon, Paige, Meagan, Andre, my mother and sister and cousins and so many more.

At the moment it is exclusively available through Amazon on Kindle and in paperback, as well as my blog. The book will re-release on Kobo, Sony, Apple ibooks and Nook. The addresses are below: