Welcome to We Do Write, Lorna. Tell us a bit about yourself.

Thank you for the invitation, Dorothy! I live on the west coast of beautiful B.C. where I work fulltime as a novelist. When I’m not writing epic, adult and young adult fantasies, I’m a martial arts instructor.

I’ve spent many years in the corporate and educational world where I created newsletters, training manuals, and educational guides. I’ve also been a scriptwriter for an adventure travel series that has been picked up for an international audience. As far as my start as a fiction writer goes, I started writing my first novel on February 7th, 2002, the day after I lost my job. It was a series of events, the stars aligning so to speak, but I started writing the very next day.

Tell us about IMAGO CHRONICLES. What’s the story about? 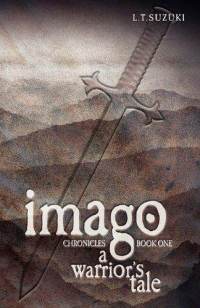 There’s an ensemble cast of characters in this epic fantasy series, but the central character is a female warrior. She is half human and half elf, and being the only one of her kind, she’s shunned by one race and denied by the other. To make matters worse, she enters the male dominated arena of warriorship and suffers a long, hard climb to become a respected leader and captain, and all without using magic or possessing supernatural strength or powers! It’s also a coming of age story as she struggles to find acceptance and love in a world that has little tolerance for a halfling like her.

I’ve had experience as a female in the male dominated arena of law enforcement and martial arts when women were breaking into this field, so I had a lot of firsthand knowledge dealing with sexism, male chauvinism, and also racism. When I turned 39, I started a journal for my daughter touching on these subjects and how I dealt with them. The fantasy novel was instigated when I was teaching at a martial arts seminar and I was the only female instructor. I had the female participants come up to me after I was done, telling me how they never knew a woman could really fight until they saw me doing a demo using all male students. When I asked them why they believed this, they said it was in their culture, their upbringing and in the books they read. Well, I didn’t want my daughter reading about women waiting to be rescued, I wanted her to read about a female capable of doing the rescuing. I also wanted to create a female character capable of overcoming both physical and mental challenges without needing special or supernatural powers to do so. With this in mind, Nayla Treeborn and the Imago Chronicles were born, but the opportunity to write the first story in this ten novel series didn’t happen until I had lost my job.

Your novels have been optioned for a movie trilogy. Congrats! Can you tell us more?

Yes, the first three novels of the Imago Chronicles series were optioned after the executive producer saw an interview and martial arts demonstration I did on MTV a few years ago. All I can say for now is that the production company involved is an Oscar nominated, two-time Golden Globe winning team. So far, I’ve been hired on as a creative consultant, an award-winning screenwriter had been hired and the screenplay has been written (and it is AWESOME), a line producer determined the film budget based on this screenplay, 100% of the film budget has been secured and even a distributor to get it into the theaters is all lined up. I’ll be able to share in the specifics of this movie deal once the production company’s public relations dept. issues a press release to the trade papers in the near future. A Warrior’s Tale is in development now and filming is slated to begin in late spring/early summer 2013.

Me too! What’s the hardest part of writing for you?

The writing is easy and fun, the hardest part is editing and then proofreading over and over and over again, as well as constantly tweaking because of that need to make the story as good as possible.

I’d have the power that would allow me to steal away other super heroes’ powers on a whim. I’d be able to fly, have superhuman strength or be invisible if I want.

I think it was probably when I had to research hand grenades and how they work.

A special thanks to my husband Scott for creating book covers, proofreading and formatting the ebook and print versions of my novels; my daughter Nia for her lovely support and being a constant source of inspiration; to all those who read the first novels in the Imago series and The Dream Merchant Saga, and then returned to buy some or all of the novels in the series; to the executive producer who optioned the Imago series for believing in my writing skills and seeing the potential for a major motion picture trilogy; to my wonderful friends who have stood by me, cheering me on with each book I’ve published and now, they’re cheering on this whole movie adventure; to all those who have taken the time to read the novels and post wonderful reviews; to friend and fellow author Jessica Subject to started and maintains the Imago Fantasy Series Facebook page; to all those who have invited me to their blog for interviews; and to you, Dorothy, for inviting me here!

You're very welcome! And finally, where can people find you and your books online?

It was great having you here today, Lorna. Thanks so much for chatting with us, and I look forward to hearing news about your movie's release!